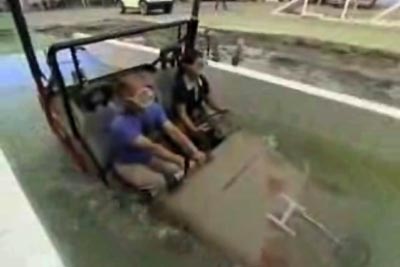 A January 2008 episode of the CBS TV "reality" show The Amazing Race (Season 12) featured a familiar-looking Jeep doing some pointless-looking things with a snorkel.

As described in an episode recap at BuddyTV.com: "Once in Taiwan, the teams took a train to the city of Taichung and took cabs to Acrobatics Jeep. Acrobatics Jeep held the episode's Road Block. One team member had to endure two stunt driving displays, while sitting beside the driver. The first ride involved a stunt driver going onto a large, suspended teeter-totter and precariously balancing the truck while accelerating backwards and forwards. Next, the team member threw on some goggles and got into an amphibious Jeep as it submerged under water for 17 seconds." 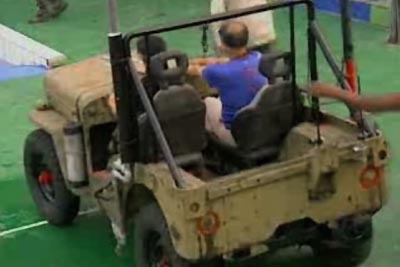 Technically speaking, the Jeep was submersible, not amphibious, but let's not quibble. It was a Mitsubishi high-hood outfitted with a pair of snorkels for air intake and exhaust, and it drove through a long, narrow pool with a ramp at each end. Probably the snorkel with the insulation beside the driver is for exhaust, and the one on the right for air. Anybody have an idea what the white cylinder on the fender is for? Or the white H-shaped device tethered to the grille? 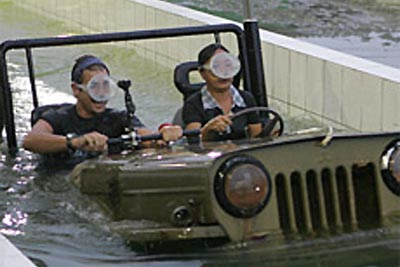 Patrick in NC saw the show and posted a note on the CJ-3B Bulletin Board: "I don't know how this thing was set up (maybe with a cable...) but they began on dry land and 'drove' the Jeep completely underwater into a small pit by at least a foot or two and then 'drove' it out of the water... Sounds weird I know but maybe there is another 3B-er out there who saw this. The group in Taipei that hosted this task were called 'Acrobatics Jeep'. A little later, the host of the show can be seen in front of another 3B. It's not every day one sees a 3B on prime time TV." 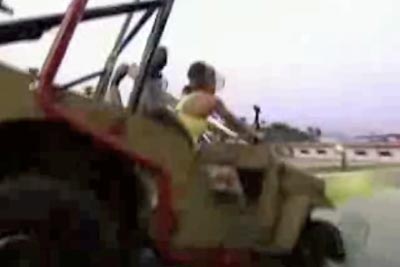 Scott Blystone responded: "T'was truly cool indeed. Certainly you can submerge with the snorkel setup. I listened closely and it sure sounded like a real engine pulling it through. You failed to note the driver of the Jeep for the underwater excursions was a young woman."

This quick glimpse of the right side of the Jeep as the female driver takes a female passenger from one of the teams into the water, shows the air snorkel. It's not clear why it's routed so far to the rear. 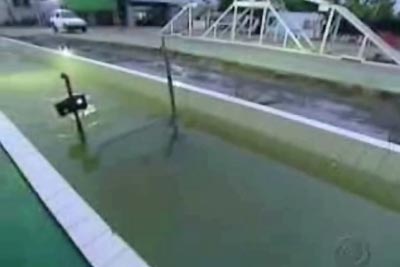 This view shows that the top of the roll bar isn't more than about a foot below the surface of the water.

Seen here in the background are the teeter-totter, ramps and small white SUV used in the earlier balancing act described above. 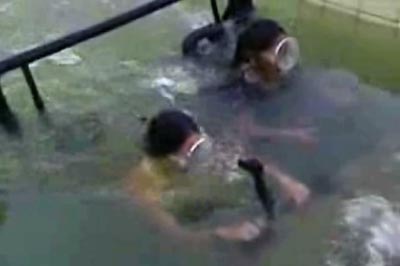 The right snorkel also carries what appears to be the transmitter for the underwater camera attached to the passenger grab bar (right). 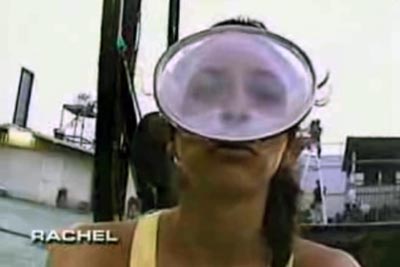 That camera provides close-up shots of the team members as they go through the tank (left).

Thanks to Patrick and Scott for their comments, the Amazing Race competitors and producers, and the anonymous Jeep driver. -- Derek Redmond