Tracks in the Virgin Snow

An offroad story by Oldtime

This story by Ken "Oldtime" Bushdiecker was popular on the CJ-3B Bulletin Board at Christmas 2006, and we're archiving it here so people can continue to enjoy it. I've added some photos courtesy of Herm the Overdrive Guy and Louie Larson. -- Derek Redmond 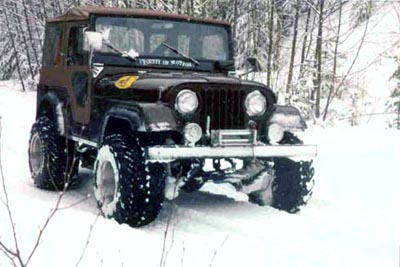 Once upon a time back in 1976 I had this nice new CJ-5. I no longer have that rig but I'll admit it was quite the Jeep. It possessed every factory heavy duty option including limited slip plus a full roll cage front and rear, brush busters and much more. I was then, and still am an explorer at heart. I had this habit of driving into the worst conditions I could find, to test the Jeep's capability and slake my thirst for remote, inaccessible wild lands.

Now that same winter found me living in the remote Arkansas Ozarks. One winter's night after a heavy snowfall, I found conditions irresistably compelling for the budding young 4WD explorer that I was. So I laid my plan; I intently scoured the 7.5 minute National Forest Service topographical maps that were laid out before me. What mainly got my attention were the areas most devoid of lines. A single long line of blue, tracing a rivers course. Also the many and close contour lines designating the sheer limestone bluffs. I broadened my focus to include a gravel road running east-west. There was a second parallel gravel road several miles south. Then, Eureka! I discovered a frail dotted line connecting the two gravel roads. 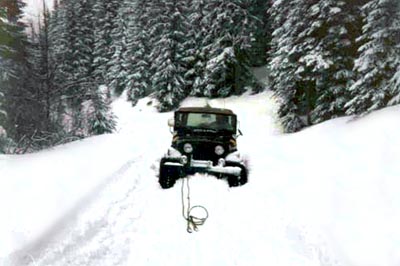 My route was thus selected. I was to go up north via paved road, and find the little used gravel road. Next I would turn east for about 15 miles, find my wilderness track and head down south. Drive down a 5000' mountain into a 1000' elevation river bottom -- a 4000' descent. I would then follow and crisscross the boulder strewn river several times. Eventually I would reach my southern gravel road and head back out. The plan seemed flawless. The wilder the better. I was going solo. No backup Jeeps and no chance for help.

So I prepared. I packed up a few supplies. I waxed up my Norwegian hiking boots, donned thick wool socks and snow gaiters. If the Jeep failed me it would be a 2-3 day trek home.

I hit the road early that next morning and headed about 60 miles north from home. I left the sparse community of about a dozen folks and saw less and then no one as I went along. It was stark white! Beautiful and cold! This truly was wild country. As I drove along I daydreamed a bit. I anticipated house-size boulders strewn along the crooked stretch of river bed. Just then I spied my east/west gravel turnoff. I now was high up into the hills. I opened the thin vinyl door, got out and turned the locks on the Warn hubs. I could see no tire tracks as I looked eastward down the buried gravel road. 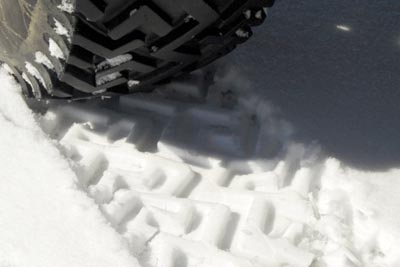 Getting back in, I moved the single stick transfer into 4WD high. I drove along slower then slower,intently looking for a track heading south. Eventually I reached a bald knob with only a few sparse shortleaf pine trees that were crusted with a thick white frosting of snow. Oh and of course there were many sharp-edged boulders of various sizes, mostly all covered in white. It was here I found the single-track trail that headed south down the mountain's side. On this southern exposure the sun had baked the foot deep snow by day. The sound of chilling wind refroze the snow along with the howls from lone coyotes during night hours.

So now I turned south down the single track. I stared for a second at the floorboards. It was time to shift the transfer down to the low range.Soon I began to move again. The 11x15" Desert Dog tires crunched as they cracked ice on top of the powder base. We slowly rolled east/southeast. We had begun our 4000' descent. The descending track was near level at first but soon it began to slope. We would have to run sideling across the glade. The glade appeared open for another half mile, then we would turn straight south into dense oak and pine forest. I spied the "tilt-o-gage" -- it read about 20 degrees slope. The view was open and spectacular on the passenger side. There was an unobstructed view as we were only 200 feet uphill of a huge vertical limestone bluff. As I attempted to cross the glade we slid off the track. I stopped and considered. As I started moving again the Jeep sideslipped much more. I eased 200 feet forward and the Jeep slid 100 feet closer to the edge. 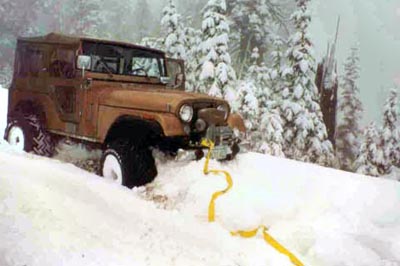 I just couldn't risk any more. I turned the wheel hard left. The Jeep turned straight uphill. The limited slip was turning and the Desert Dogs were clawing away at a slow churn for all their worth. I dared not stop or we would surely lose any and all momentum we had. At one point we slid 3 or 4 times our forward motion. Several times we would slide 20 or 30 feet then catch a good rock. I barely got it turned around. The edge only 75 feet away below us. There was nothing between us and the edge except sharp limestone crusted in iced-over snow.

We soon made it back to the gravel on top. The Jeep had reached its limitation, and my nerve had reached its zenith too. I then headed home for the rest of winter. Maybe just maybe I'll go back again someday with my 3B and a full set of chains! I would like to leave my Tracks In The Virgin Snow!

Maxx: "Great story indeed!. I could picture the scenario. That's the benchmark of a good writer. I could almost hear the crunch of the snow, and the thumps on the wheel wells."

Gerald Oswald: "Thanks for the vision. For all of us who make The CJ-3B Page a part of our life there is a strange bond between us and the old metal and rubber we call the 3B. For me it started when I was a kid. Can you ever get over the blasting hummmm of the motor in low range going through that impassable terrain with the faithful friend we call our Jeep?" 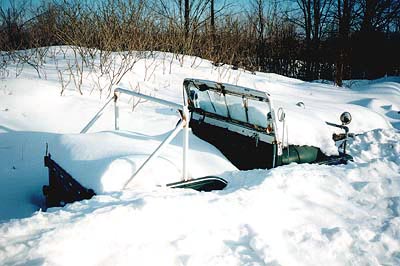 Oldtime: "I'm glad you and many others enjoyed the story. Here's a quick follow up:

"I guess the limestone bluff dropped 75 to 200 feet down. I didn't investigate further at the time. Some of the facts may be off a tad, such as snow depth might have really only been 8" or so. I have to admit it was a ways back. All in all it is very close to accurate. I really don't even recall exactly where it was without getting some maps out, but I'm sure I could find it again. If I remembered all the details I would have included a few extra facts such as which river bottom, the county I was in, etc. I think it was the Little Mulberry River or perhaps the Mulberry River, and I was in Newton county?

"Anyway, I long since moved away, on to other adventures. I have to tell you all that it is more fun to write down these old Jeep stories than just about anything else I've done here on our great little page. I'll send you all some other old tales when the time is right. I may have a few good ones to tell. And yes,I really would consider that trek again. Of course an 8 to 12-inch snow is not too common in those parts of the country but it does happen when the time is right. Well, I'll be seeing some of you on the backroads!"

Thanks to Ken Bushdiecker for the story, Herm The Overdrive Guy for the CJ-5 photos, and Louie Larson for the tire photos. (Louie said his Desert Dogs were the first out of the mold, given to him for testing and photographed for advertising in the 1970's.)

I took the photo of the green CJ-5 which has been sitting under the snow for many winters now near Sharbot Lake, Ontario. -- Derek Redmond

See also 20 Cubic Feet of Firewood with Ken's stories about woodcutting and roadside repairs, and The Idaho Lakeview Mine (Rich Mylar's almost-stuck-in-the-snow story.)

Also on CJ3B.info, see stories about Jeeps and Water.