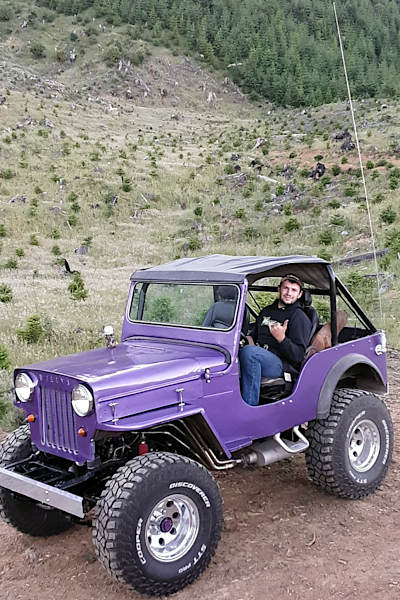 Purple is probably the least common color for vehicle paint, maybe especially for Jeeps. For some reason it seems pretty exotic. Willys never offered anything close to purple as a factory paint color, although Plum (80K JPEG) showed up on AMC's early-seventies Renegade CJ-5, and there was Xtreme Purple (80K JPEG) on Wranglers in the mid-twenty-teens.

Although you might think of purple as perfect for boulevard cruising, it actually looks great on an off-road vehicle, because it's a complementary color to green, which is such a big part of the off-road background.

Greg Scheer's '53 CJ-3B does some cruising (170K JPEG) but it's seen here in the Callahan Mountains near Roseburg, Oregon, with his brother Dalton at the wheel. 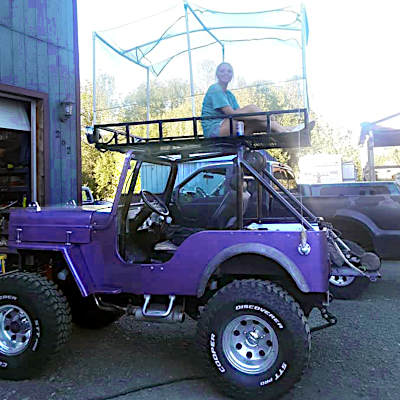 Greg already had some distinctive features for his 3B, including the SBF headers intended for a Land Cruiser, and a vintage hardtop (200K JPEG). But as of 2020 he got serious about camping in the mountains, and built a tent platform to mount over the roll bar. 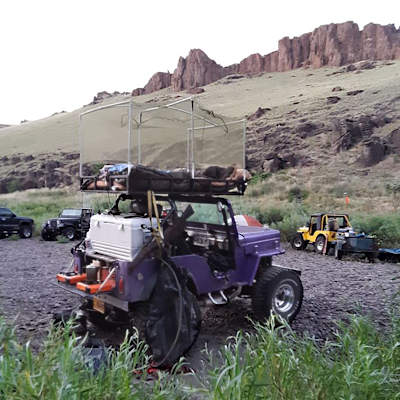 Here's the '53 set up for the night -- an overlanding package including stoves, cooler and sleeping platform in a very compact package. As of July 2021, Greg is trying the Buick look (130K JPEG) for some engine air cooling.

Thanks to Greg Scheer for the photos. 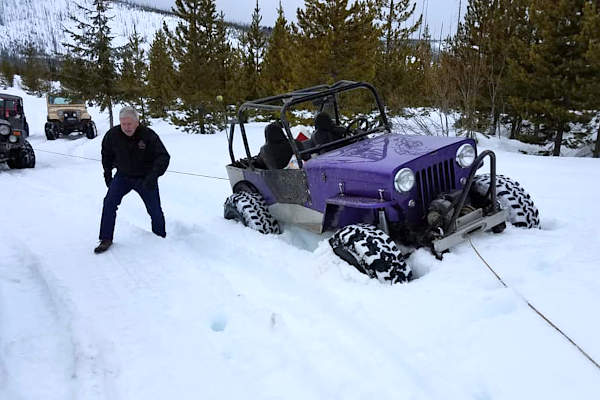 Chris Holmes is in Washington, and this photo comes from a day playing in the snow with his purple project in 2020, at Cle Elum Lake in the Cascades. 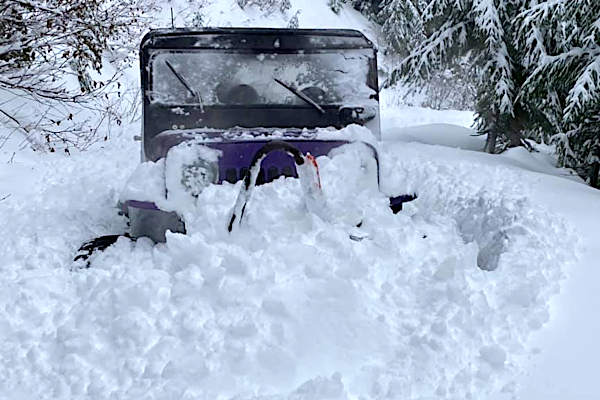 Obviously Chris does not shy away from these situations. This shot was taken near Leavenworth WA, the Bavarian-style village sometimes known as "America's Ultimate Holiday Town." 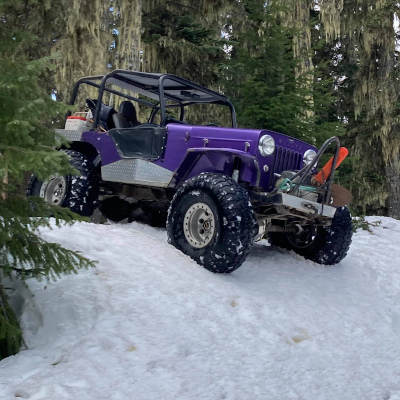 There was still plenty of snow around, when Chris was back at Cle Elum Lake in May 2021. 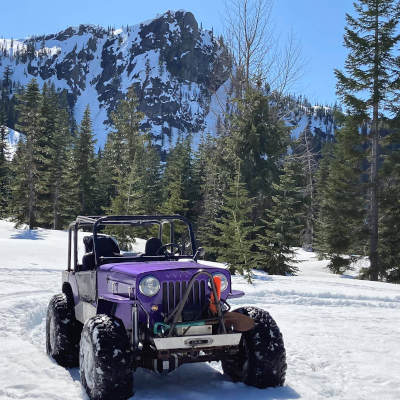 Chris desribes his buildup: "Nothing real fancy. 383 Chevy and a T-18/20 t-case with Tera gears. 22 gallon aluminum tank under the front seats. Redhead steering box. 39.5" IROKs for snow and 38" TSLs for summertime." 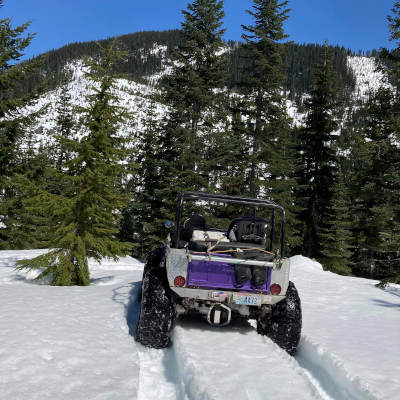 The rear axle is a high pinion 60, and the front is a Detroit-equipped 44. Chris adds: "Four-wheel disc brakes. Spring-over with outboarded rear springs. Frame strengthens, and roll cage mounted to frame." He doesn't mention the snow boots, lunch cooler and baby seat. 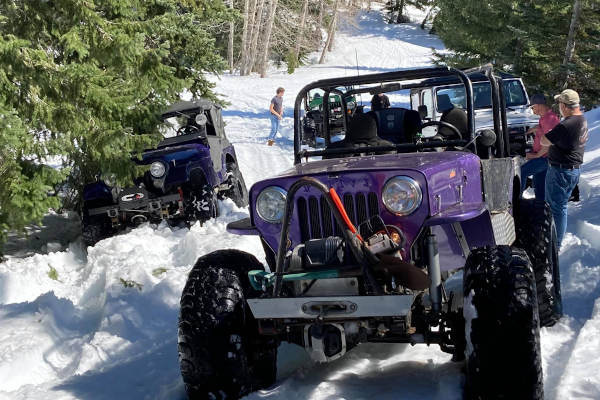 The purple B is a familiar sight in the PNW. Chris says, "Been in the family for 51 years. Still have my dad's '69 short nose 5 also."

As is often the case, on this day he's out with the Rock'd n Lock'd Jeep club, and his chain saw and shovel are tucked in around the winch. 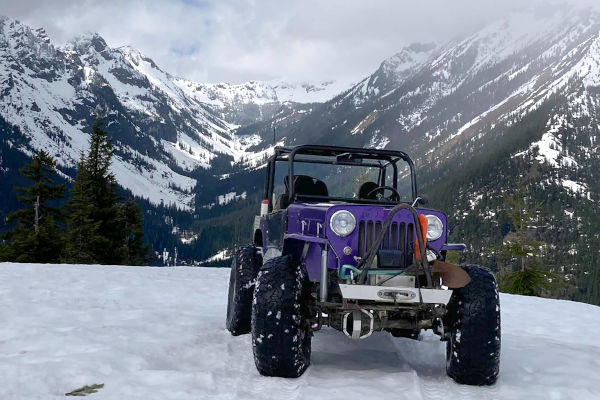 The photo on the May 2021 CJ3B.info cover page, is a nice one with the Cascade Range in the background.

A 1953 CJ-3B built by Toby Lavender of Seaside, California was one of the finalists in Four Wheeler magazine's Top Truck Challenge 2002. Held in Hollister, California in early June, the competition brought together ten 4x4 vehicles selected by the magazine's readers. 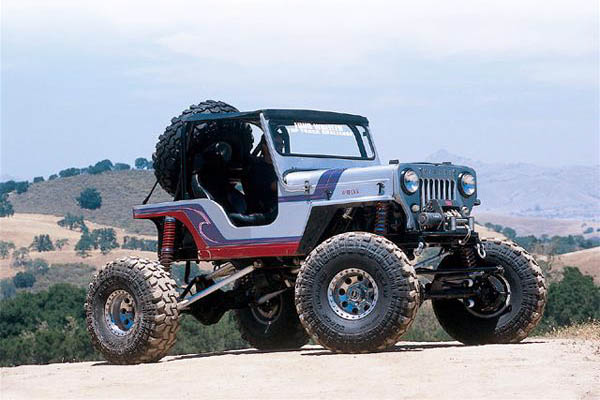 There is usually a handful of Jeeps among the finalists in the TTC, and this year there were two flatfenders -- a CJ-3A and a 3B -- but they were basically just bodies sitting on top of custom rock crawlers. Lavender's Jeep had the engine compartment stretched forward by 3 inches to fit the Chevy 350 V8. 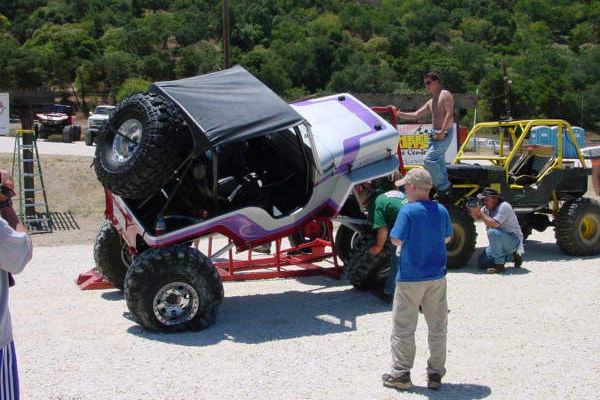 In this photo Lavender airs down the 38.5-inch Super Swamper tires to improve the score a bit on the RTI ramp. He carries an onboard air tank. 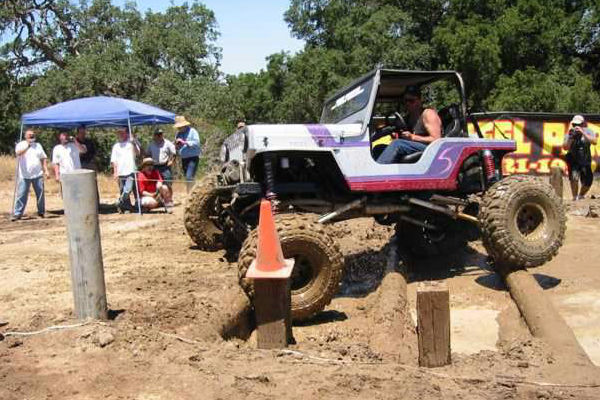 The Jeep's wheelbase is extended to 100 inches. The suspension is three-link with coilover shocks front and rear, and steering is hydraulically assisted.

This photo and the photos below are by Matt c104, courtesy Pirate 4x4.com. 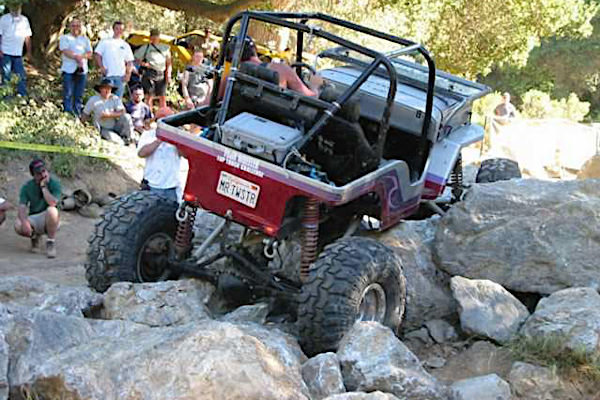 On the other hand, Lavender scored at (or near) the bottom in acceleration, braking, towing, the mudpit, and the "mini-Rubicon." 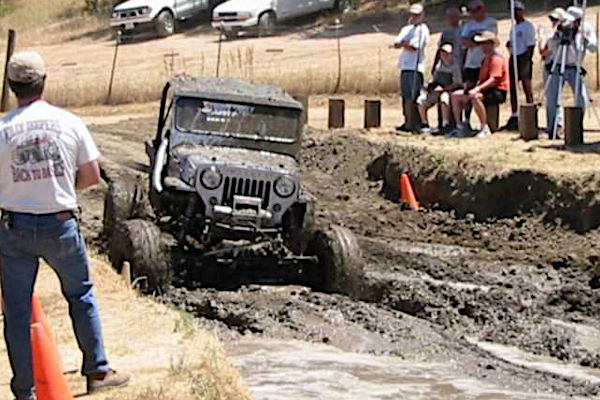 The high hood was in the middle of the pack in engineering, ride, and the tank trap (160K JPEG). In the totals, Toby Lavender placed a very respectable fourth out of ten.

The complete results were scheduled to appear in Four Wheeler's November 2002 issue. Thanks to Tom McHugh for spotting this. 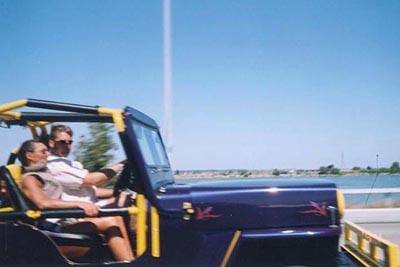 The owner of this high-hood boulevard cruiser painted it purple; it's a color that turns heads so it's perfect on a Jeep like this. Most people probably feel purple is too wild for a stock Jeep, so Chrysler didn't sell too many 1997 TJ's in the factory Magenta. (And needless to say, Willys didn't use any paint close to this, although they turned out a few in a pretty bright yellow.) 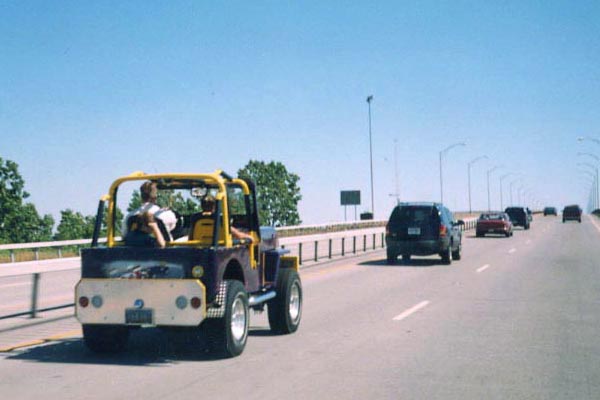 Bruce Harchuck sent these photos he grabbed out the driver's window near Sandusky, Ohio in the summer of 2000. Bruce says, "I barely had time to take a picture. I was going 65 MPH when he passed me!"

I posted his photos here soon after that,with the question, "Anybody recognize this Jeep?" And after having the photos posted for nearly 20 years, we've found out the background on this Jeep. 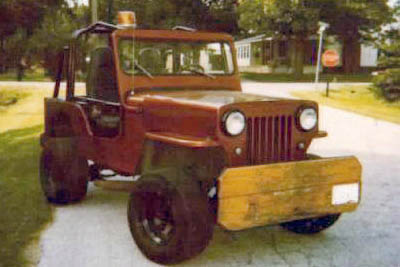 Kurt Lauer of Elyria, Ohio, says he and his father built the Jeep and used it to push race cars in Sandusky and at other tracks around Ohio.

It was not originally a high hood. Kurt says, "The body was either a 2A or 3A, and we extended it up to be a B. The frame and running gear is a '74 CJ-5. The original 304 has long since been replaced. My dad extended the cowl sides and made the hood by hand to make everything fit." 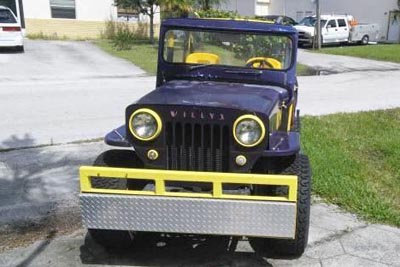 When the Lauers sold the Jeep, it was painted in a copper color. They lost track of it, so we still don't know who did the purple and yellow paint job. At one point it was for sale in Florida, which is where this picture came from.

As of 2019, Kurt is trying to find the Jeep again. Any leads would be welcome. 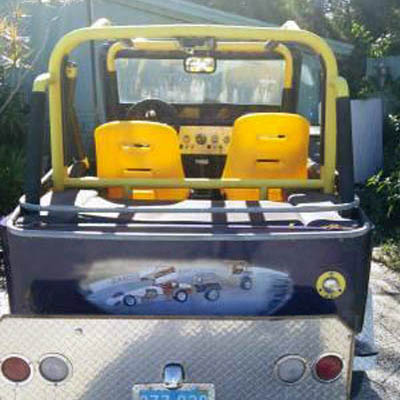 Kurt says, "We removed the tailgate and filled it in, to make a custom upholstered seat and speaker box below." This photo reveals artwork on that purple rear panel, suggesting that new owners may still have been using the Jeep at racetracks.


Thanks to Bruce and Kurt for the photos, and to Tom Edwards. -- Derek Redmond