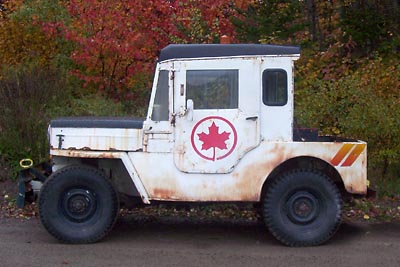 As far as I know, this 1956 Jeep was always owned by Air Canada and was of course never off pavement, so the frame is in good shape. They use urea on the ramp and not salt which is corrosive to aircraft; this is a saving grace to machinery. The Jeep was used for a luggage tug. I located it late one night two years ago while I was working at YHZ (Halifax International) and driving around waiting for an arriving flight. It's taken me this long to get hold of it, and a little sleuthing to find it again after it disappeared from the ramp. Air Canada has a policy now of selling off their surplus equipment for scrap metal value only, pennies per pound. It landed at the scrapper's one day and was sold to the guy I bought it from. He stored it in his barn since then, and I found it again in mid-September. 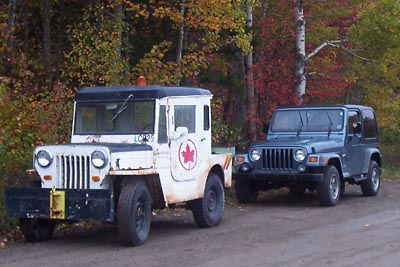 It has the sassy looking front bumper with towing point (80K JPEG) and pintle hook on the back. I know those front parking lights are not original, so I'll be looking for a set during the resto. It looks to have the original engine (90K JPEG) as it does have a Carter carb and there is a trace of the original sticker on the valve cover. The person I bought it from had started to work on it and had pulled off the valve cover.

The tall cab is the odd duck of all things, made of steel with steel doors. The windshield is shoved forward a bit and is not hinged. As you can see, two side windows look to be original. The tub has no drain holes as others do, but has a rust hole on floor on the passengers side for drainage in the meantime! Windshield wiper is high mounted and electric. As for the S/N, I have yet to make out the full set of numbers. 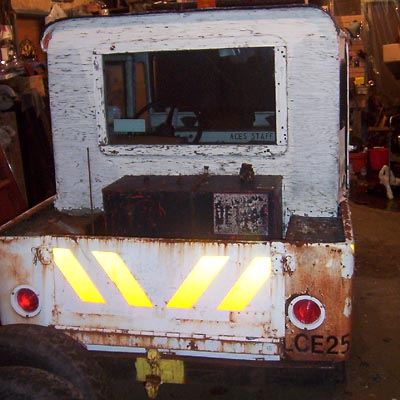 The back wall is made of plywood with glass window insert. Very hard to tell if there was a full cab, as the lines are straight and there is an overhang of about 3 inches on the roof compared to the sides. No fuel tank beneath the driver's side seat, or it has been removed and replaced in the past with a utilitarian steel tank that's probably around 10-15 gallons in the back behind the cab. Filler neck for the fuel tank on driver's side is in place but it looks like it was never punched out. The driver's seat looks like it was robbed from a minivan; definitely will be tossed when the time comes. Passenger seat is original looking but needs a re-work of the upholstery. No sign of the tool box compartment.

I have taken to adapting a name for it right now based on its title LCE 25; new nickname "LuCy E." 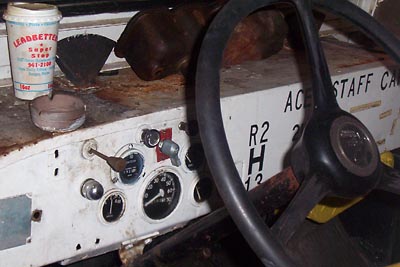 The dashboard is rather different too, not a W-style layout but has the small speedo. It's reading 153 miles, probably disconnected. Hobbs time meter installed; I forget the time registered. No keyed ignition, just a master toggle start switch. Who needs a keyed ignition on a vehicle that was never out beyond a fenced-in compound such as an airport. Knobs are pretty basic and quite stiff. Has a heater at the passenger's feet.

My plans are to spray down the engine and body in LPS 2 or 3 for winter and build a shelter over it as we don't have a garage right now.

Thanks to Ian for the photos and information. Background photo of Halifax International looking after planes on 9/11, by Kevin G. from Airliners.net. -- Derek Redmond

Return to 1956 Owners Photos or the index of Unusual Photos.