John M. Dean is a collector of diecast toy vehicles in Colorado. He has a large collection of toys dating back to the fifties and earlier, and in 1999 displayed some of the Jeeps from his collection here. 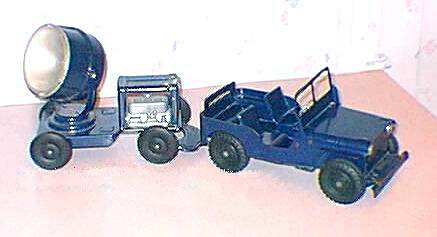 John comments, "This is a Marx pressed steel model of a Navy Jeep with search light trailer. This is a Tonka sized toy from the early 50s. I'm not sure the Jeep and the trailer match -- the wheels are not the same." 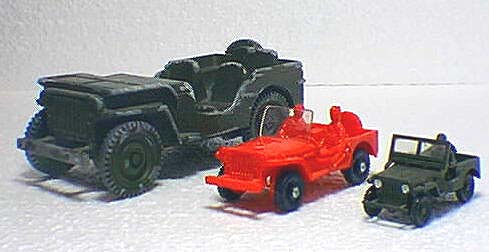 Here's a 1/24 recognition model made by Dale of Chicago during WWII. John says, "The red vinyl Jeep is also a military one, from Tomte in Norway. It's a copy of something probably, because most Tomte toys were.

"The smallest Jeep is a Siku made in Germany (see a closer photo). Siku made plastic toys until the early 60's when they switched to diecast. I have a '61 Chrysler Windsor and a Mercedes Benz 190 in plastic, and I have a '63 Olds 98 in metal, so I suspect the switch was in there somewhere." 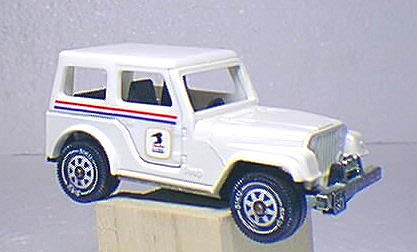 "Here are three rare models of the Jeep station wagon. The smallest of the three is a 1/43 by Gasquy of Belgium that must be from about 1951 going by the age of the Studebaker that I have by the same firm.

"The middle one is by Mercury, the Italian die cast company (see a closer photo). The man I got it from said he got it at the Jeep dealer, so it's a promo.

"The largest of the three is an incorrect repaint of a true dealer promo. It was originally a dull red with the chrome and windows masked off to make a chrome finish. I'm just guessing here but in Banthrico Banks -- who made promos of US cars in the late 40's into the mid-50's -- a red or a blue one meant that it was distributed through some other outlet like a bank. The dealer promos were painted the actual colors of the cars." -- John Dean 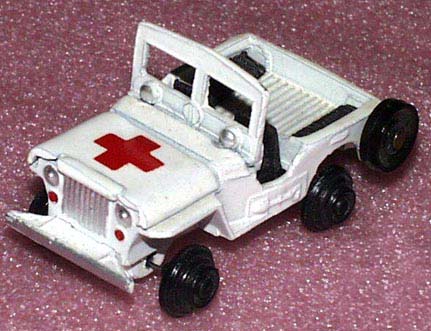 One of John's more recent finds is a knock-off (apparently made in China) of the Matchbox MB. In addition to the ambulance markings, a significant feature not found on any of the Matchbox versions is a spare tire mounted on the left side. See also a rear view photo (38K JPEG).

Thanks to John for sending these. This is one of the first pages of Jeep toys on the website. -- Derek Redmond