Jeep Stories From the Northwest, Part 5

The previous installments of Jeep Stories From the Northwest have been filled with adventures and laughs, and of course Rich Mylar's CJ-3B. But the importance of history and friendship have also been constant themes, and those themes are front and center in this latest story. In 1967, Rich didn't yet own his CJ-3B, but he was already gaining experiences that would serve him well in the next few decades. -- Derek Redmond

I had returned from Vietnam in the fall of 1967, and Popeye had invited me to go deer hunting with him and stay at his cabin tucked back in the Sierra-Nevada Mountains. Popeye was an old friend of my Dad's and had owned a couple of old army Jeeps. He gave me my first ride in a Jeep and I have never forgotten that Jeep ride; that was about 1951, when I was about chin high to a long neck beer bottle. 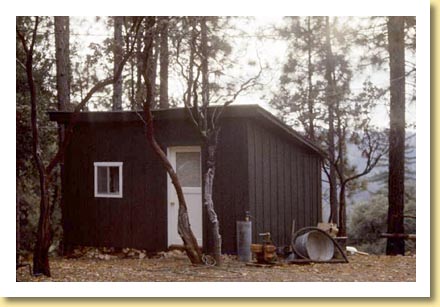 Popeye had retired and bought 10 acres of mountain land from Russell Grigsby, who was known to us as just plain old "Grigs." Popeye had built a couple of small cabins on the southwest side of the mountain, just above Grigs' log cabin. Popeye and Grigs did not have power; the closest power lines were miles away. For water, Popeye had a tanker truck he would drive to the spring once a week or so to refill his elevated water tank.

After the chaos I experienced in Asia, Popeye's remote cabin was a much-welcomed paradise. I still recall the evenings spent with him and his wife Mary sitting around the little dining room sipping coffee with a little whiskey in it, the room lit by a simple coal oil lamp with its wavering, flickering yellow light. Whenever I smell burnt kerosene now, I always recall those long gone days with a warm fondness.

Popeye ran me out of the sack at zero-zero dark thirty with, "Hit the deck and grab your rifle!" and then he left to fire up his WW2 4x4 Dodge Power Wagon command car. I lit the coal oil lamp next to my bed. It was damned chilly in Popeye's guest cabin and I got dressed in a hurry. I was not used to the chillingly cold night air of the mountains after a year in Southeast Asia, where it is most always hot and humid.

Mary had made us a breakfast of bacon, eggs and hash browns that was quickly wolfed down, and topped off with rich-tasting strong hot coffee. It was the opening day of deer season; Popeye had a plan for our hunt, and we left in the Power Wagon, growling and rattling along the dirt road in the dark of the morning. 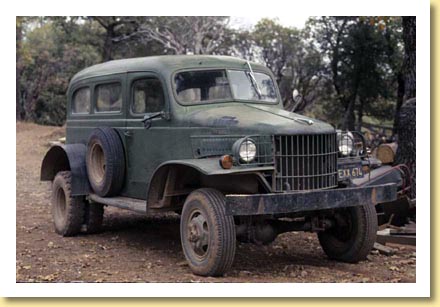 Popeye downshifted and drove off the road onto an old logging spur. We came to the base of a steep rocky hill in the cold and still very dark early morning. Popeye shifted the Power Wagon's transfer case into low range and we began the climb up the hill. I was rather surprised the old vehicle could climb this hill because it was so steep. This was the beginning of my much-needed education on 4X4's and transfer cases.

The Power Wagon made it to the top of the hill with little effort, and the dust caught up to us and seemed to be hovering around the headlights in the blackness of the early morning hours. Popeye shut the engine down and we sat in the darkness speaking softly and swilling hot coffee.

"It will be light enough to start hunting here in a little while," Popeye whispered in the dark cab of the Power Wagon.

"They are used to this old rattle trap and hear it all the time. I want you to zigzag down the hill and boot them out of the brush, and I'll meet you at the bottom of the hill. We might get lucky this morning."

It was starting to get light enough to see, when Popeye fired up the engine and I got out and shut the door as softly as I could. He backed up with the headlights piercing a thin cloud of dust as I stood there in the morning twilight with my rifle slung over my shoulder. I watched the Power Wagon descend and rumble down the hill with one bright red brake light on.

I stood there in the dark breathing in the cold mountain air for a few moments before I loaded my new Winchester bolt-action rifle, and then put the safety on, and began zigzagging down the mountain. I came to a good-sized patch of very thick Manzanita brush and decide to try to work my way through it. That was a big mistake on my part; the brush kept getting thicker and thicker as I worked my way to the other side. I was forced into low crawling through the dirt and rocks with my rifle in the crook of my arms.

I made it to the bottom of the hill, maybe a little worse for wear and with some new scratches on the stock of my Winchester. I saw the Power Wagon sitting alongside the road; I sat on the running boards, and waited for Popeye in the late morning sun. I must have waited for about an hour or so before I saw Popeye sauntering along the road carrying his rifle and coming in my direction.

"Ya see anything Richie?"

I slid over and Popeye sat down next to me on the running board, caught his breath, and said, "Ya wanta see somethin' special? But you're goin' to have to promise me you will never show or tell anyone."

"Sure Popeye, I promise I won't show or tell anyone."

Popeye pumped the gas pedal a couple of times and pushed the floor starter with his boot. The Power Wagon exploded to life, shattering the still morning mountain air, and rumbled down the road with Popeye and me bouncing up and down in the seats as we hit the many bumps in the dirt road.

We came to a small meadow amongst all the trees, Popeye shut down the Power Wagon, and we got out. As a thin veil of red mountain dust drifted across this meadow, Popeye said, "Long ago some Injuns lived here, and I think it was Mi-Wuk's."

"How do you know that, Popeye?"

I followed Popeye out to the center of the meadow and he spread out a pile of fresh gopher dirt with his boot, saying "Looky here," as he pointed to a few bright red beads in the dirt. There was well over a hundred Indian handmade beads of various colors in this one pile of dirt brought to the surface by a gopher.

"Them Mi-Wuks used to camp here, probably during the good weather months in the summers. I am willing to bet they camped here for thousands of years. Every year the gophers bring these ol' Injun beads to the surface. I bring Mary down here with her rake and jar she has one hell of a collection of beads now; she has over a gallon of them stashed in her big glass jar."

"Wow Popeye, this is a neat secret. I won't ever tell anyone, not even myself."

Popeye chuckled, "This is not the secret, the secret is over there a ways." Popeye pointed across the meadow and began walking in that direction with me following him. We came to the edge of the meadow and Popeye worked his way into the thick brush. We came to a fair sized long pile of rocks overgrown with weeds along the edges. I had no idea what I was looking at as I asked, "What is it Popeye?"

"It's an ol' time Mi-Wuk Injun grave. I stumbled across it a few years ago when I was huntin' deer in this neck of the woods."

Popeye leaned over and removed one big rock at one end of the grave, I could see a yellowed-brownish human skull, and it made the hair on the back on my neck stand up. Popeye placed the rock back carefully in place, even gently.

"Don't worry Popeye; I will never tell a soul about this place, you can count on that."

"That's good for me to hear Richie. There is always some damned fool out there that wants to dig 'em up and part 'em out."

We went back to the Power Wagon and I got my coffee mug and collected about 200 beads from numerous piles of gopher for Mary's bead collection.

I was supposed to spend two or three days hunting with Popeye, and I ended up spending half of my 30-day leave with Popeye and Mary. My squadron was refitting with new aircraft and it would not be long before I would be returning to Vietnam. Popeye died shortly after I was honorably discharged and bought my CJ-3B, but I continued to drive in to see Grigs now and then, before I moved to the north country to live in 1973.

Popeye's secret is still safe with me. I never have told a soul for over 40 years, just like I said I wouldn't. May Popeye and that Indian rest in peace; they both deserve to.

Thanks to Rich for another great story. See Spring Breakup in the Sierras for the story of a 1973 visit with Grigs. -- Derek Redmond