A 3B and a Rabbit

Jeep Stories From the Northwest, Part 3

In the previous installment of Jeep Stories From the Northwest by Rich Mylar, you probably got the idea that Rich has always had a faithful dog ready to jump into his Jeep. Well, his dog plays a central role once again in this story. -- Derek Redmond 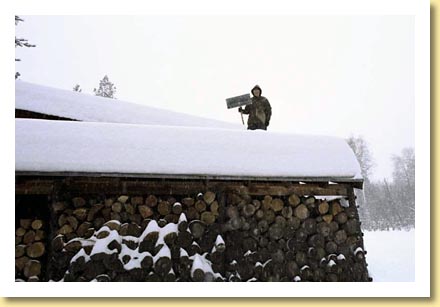 It was the early spring of 1975, and we had survived our second winter in North Idaho, still nested in tight at Pappy and Edna's cabin lost in the mountains. My 3B had spent its second winter out in the harsh weather, and we experienced some brutal, chillingly sub-zero temperatures. When the clouds cleared off, the thermometer dropped like a rock during the night.

I desperately needed a dry place to keep the 3B, and a spot for my tools. I had talked with my landlord Pappy, and he told me that I could trip off all the logs I needed to build a garage for my Jeep. So I went to work falling timber, and hit it hard using my 3B as a log skidder to move the logs to the selected site by the cabin. I had a good idea of what I wanted to build; it would be two stories high, with the lower for the Jeep, and the upper story a place to set up my reloading press. I wanted enough room to have a wood heater and a set of bunk beds for the good rough-cut company I keep, just in case someone falls too far into the corn juice. 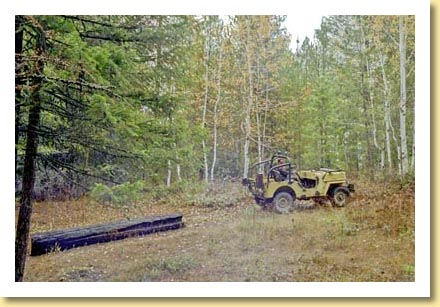 It did not take me that long to get all the tamarack logs decked up, and I went to work with the chainsaw and a sharp double-bit axe. I cut the logs 24 feet long and the 3B did not even let out a grunt as I dragged them back to the cabin, with my dog Kimo always riding shotgun. I cut the corners with the chainsaw and notched them with the axe, and then rolled them into place and spiked them down.

Waldo lived not too far away from the cabin; Waldo was Pappy's older brother and they both were retired. Waldo had lost a leg in a logging accident years before, and he was a pretty-tough customer so to speak, as some loggers can be. Waldo taught me how to put a fine razor edge on a saw chain and fall big timber without getting myself killed. I can recall him saying, "Keep 'er out'a the dirt an' she'll cut like hell." I knew Waldo was somewhere in his early 70's at the time. 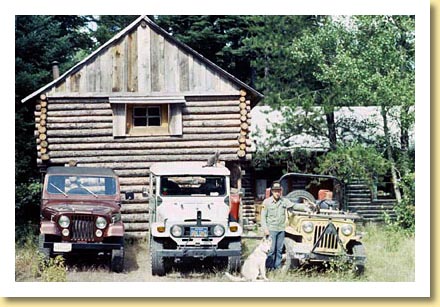 There are couple of good stories from those days, like the time I almost ran over Waldo who was crawling across the black ice using a screw driver to pull himself along. I had to put the 3B in the ditch to keep from killing him on the black ice.

Waldo had a young daughter who had a pet white rabbit, and Kimo would go over to Waldo's house and hang out with Cindy and her rabbit. My dog never showed any aggression at all towards this white rabbit that had one black spot over his eye. Kimo was a good dog as far as dogs go; not too bright, but definitely brighter than his master was at that time. 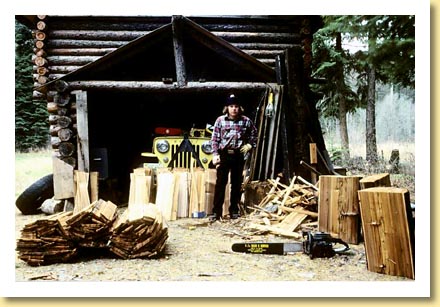 This new log structure was nearing completion and the pole rafters were going up. I was home alone, had just finished breakfast, and went outside and found Kimo lying on the porch with a dead, fat white rabbit between his paws. I yelled at the dog, "What have you done, you dumb son-of-a-bitch -- you killed Hoppy!"

I was in a predicament and did not know what to do with the dead white rabbit that had dirt and dog slobber smeared all over him. I was afraid Waldo would put a rifle bullet in Kimo for killing Cindy's pet rabbit.

The light bulb in my mind went on, and I took Hoppy into the sink, gave him a bath, and cleaned him as best I could. His batteries were totally dead, and there was not one damn thing I could do to bring him back to life. I would have certainly stuffed a new die-hard battery in him if such a thing was possible. There was no white rabbit in the world like Hoppy, so replacing him with a new one was out of the question. 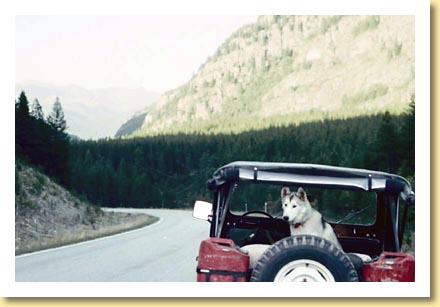 I got my wife's hair dyer and went to work with the dog's brush on Hoppy. It took considerable time to restore this dead rabbit to pristine, but still deader-than-hell condition. When I was done he looked pretty good over all, and I put him in a brown paper bag, grabbed my camouflage jacket and put the dog in the truck so he would not follow me.

I hit the brush and headed over to Waldo's house. I peered out from the brush and saw no one was home; Waldo's truck was gone, and this was a very good thing. My timing could not have been any better. I slipped up to Hoppy's large cage and arranged him as if he had died of natural causes. My big problem now solved, I disappeared back into the brush and went back to work on the garage.

Two days later, I saw Waldo out of the corner of my eye slowly hobbling along the trail on his crutches. As he came closer, I shut down the chainsaw and called out, "Howdy Waldo."

"Howdy Rich" was Waldo's reply, and I climbed down off the log building as he struggled to make it up the hill. I had grown to like Waldo a lot. He was coarse, profane and colorful as loggers come, but a more honest man would be dammed hard to find.

"How about a cup of coffee with a slug of bug juice in it Waldo?"

"That sounds mighty good to me Rich."

We went inside the cabin and Waldo sat down at the kitchen table as I filled two coffee mugs and put a big slug of whiskey in each. I handed one to Waldo and then sat down across from him as he cut off a chew from his plug with his pocket knife.

Waldo looked me right in my eyes as he spoke in a serious tone, "I think we got us some of them god-damned devil worshipers on the loose around here. You'd better pull the plug on your scatter-gun Rich, and bolt the doors at night."

I was very surprised by what Waldo said, although there had been stories about cattle mutilations and such in the newspapers at the time.

"Geez Waldo, why do you say that?"

Waldo spoke with his gravel-like voice, "A few days back Cindy's rabbit died and we had a nice little funeral for 'im, she even buried 'im in a little cardboard box and said a prayer over 'im. I figure them goddamned devil worshipers dug ol' Hoppy up and put 'im back in his cage. I just can't figure out how them godless varmints found out where he was buried at!"

I sure was glad my dog could not talk; he would have spilled the beans for sure. 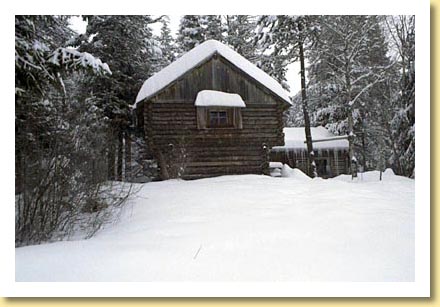 My old friend Kevin had returned to California, settled his affairs, and then decided to drag up for North Idaho. He showed up at the cabin when the log garage project was just about done. I did not recognize the old beat-up red Chevy pickup at first, and then I broke into a wide smile when I saw who was driving.

I felt Kevin's firm grip and returned the same as he spoke: "What the hell kind of project you got goin' now Rich? This place looks like a log fort. I love it, it looks great." 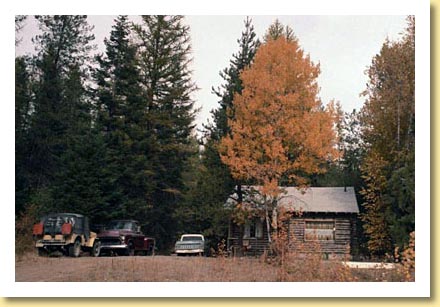 Kevin needed a bunk and he was always welcome at my place, so we moved all of his gear into the "fort". We talked in the flickering orange firelight coming from the stove, and I told him the rabbit story. I have never seen Kevin laugh as hard as he did that night. I made him promise not to tell anyone and he never did. Kevin spent most of the winter of 1975-76 in the fort.

A few years later I came down from Alaska and went out to see Waldo to make a confession, but found out Waldo had passed on from this world. How I miss those simple days on the Bunco Road, at Pappy's place in the forest, and all the friends I made there.