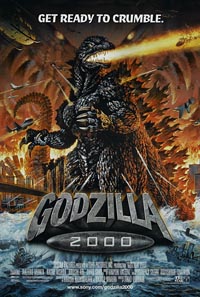 The two photos at the top of this page show what is probably a Mitusbishi J54A military Jeep, a diesel-powered version of the CJ-3B built in the late 1960s and early 70's. Later in the film, the newer Jeep seen here makes some appearances; it looks like a J24A, built in the 1970's-80's.

Ed Freniere spotted the Jeeps in Godzilla 2000 and commented, "As for the movie, it is classic Godzilla, updated for the 1990's, complete with low-budget special effects. I found myself wearing a wry smile throughout the movie. As they say, it's so bad it's good." Thanks Ed. -- Derek Redmond

Jeeps also popped up in some of the earlier Godzilla movies.