Horsepower replacing horses in the Netherlands

Scheveningen (the harbor district of The Hague, on the North Sea coast of the Netherlands) has been a deep sea fishing port for more than a century. As seen further down this page, one year's herring catch in the early 1950s was 118 million kilograms (260 million pounds.)

In the 1950s and 60s the Jeeps of transport company J.W. Thijsse & Zonen ("sons") were a familiar sight around Scheveningen harbor. The Jeeps were mainly used to move wagon loads of herring barrels and drift nets for local fishing companies, and also as service vehicles. 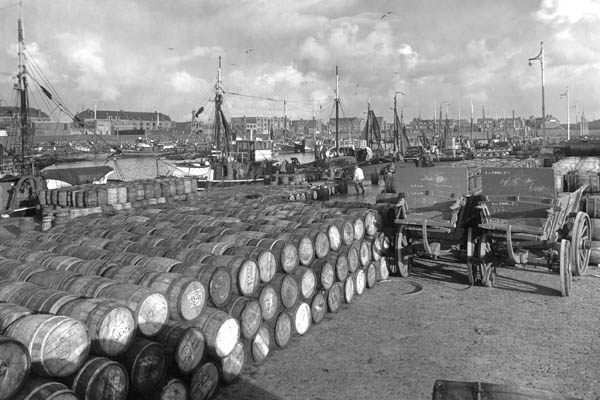 This detailed photo (260K JPEG) of the fishing wharf was taken in November 1951. There are no Jeeps in evidence here, but the picture includes a few trucks, and the horse-drawn wagons which would soon be pulled by CJ-3Bs.

Photo courtesy of the A. van der Zwan Collection at the Hague Municipal Archive. 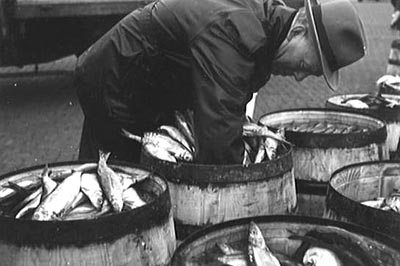 Most of the herring was salted at sea and packed into wooden barrels. This meant thousands of barrels to be moved in and out of the harbor every day of the fishing season, as well as huge drift nets to be loaded onboard vessels, or unloaded for drying and repair. The photo shows an inspector in 1960 taking a sample to establish that the herring corresponds to the size and quality stated on the barrels. 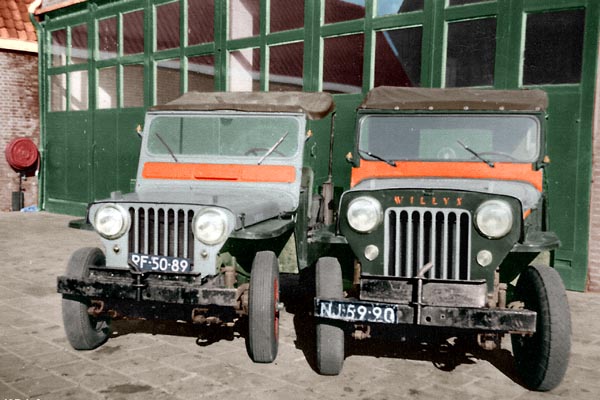 The Jeep with license plate RF-50-89 is an imported Willys-Overland CJ-3A, and NJ-59-90 is a Willys CJ-3B assembled at the Netherlands Kaiser-Frazer factory (NEKAF) in Rotterdam. The Jeeps had an addition on the front bumper with a pin-and-eye coupling intended to move trailers more accurately. The Jeeps were painted in the same colors as the company's trucks; this black & white photo (100K JPEG) was colorized for CJ3B.info. 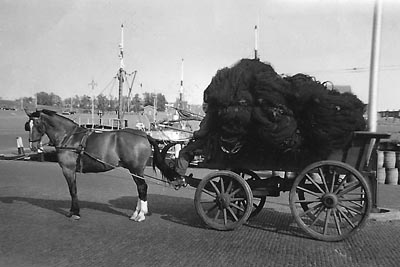 In retrospect, the decade of the fifties was a special time, when wagons pulled by horses were gradually disappearing from the street scene, and motor vehicles played an increasingly important role.

Except as indicated, all of these photos are from the collection of company co-owner J.W. Thijsse. 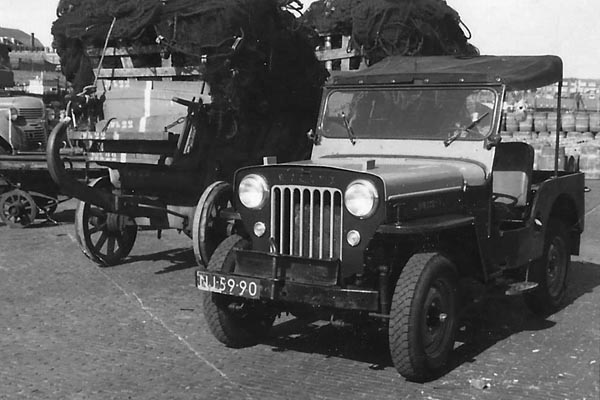 Farm wagons were still in use at the end of the fifties and had wide wooden wheels to prevent the cars from sinking in the sand during the transport of drift nets to a field in the dunes for drying. The wide part of the wheels was called feersel and did not come into contact with the ground on paved roads. The wagons were able to load one quarter of a fishing boat drift net; people of Scheveningen spoke of a quartel. 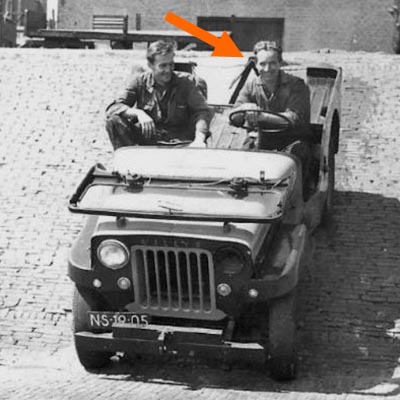 For the coupling of the wagons, a triangle with a large link was attached to the back of the Jeep (see arrow). The link was secured in a slot in the curved pole, with a piece of kak-houtje ("crap wood"), in the same way as the horses had been hitched to the wagon. The wagons could be moved only slowly, particularly if more than one was linked together.

Piet van der Zwan and Cor Bruin (behind the wheel) were the permanent engineers of the company, and are seen here posing on the talud ("slope") of the second inner port. The front fender skirts added to NS-19-05 by a previous owner gave it a classy look, but the missing headlight was never replaced. 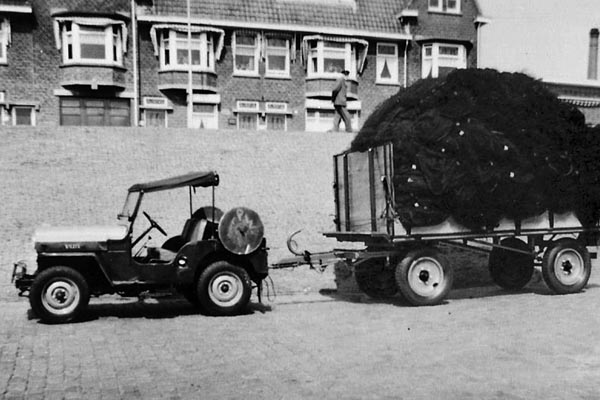 Newer trailers were introduced which made use of the same Jeep tow bar; the big roller seen on the back of the Jeep was used for loaded and unloading.

In the course of the 1960s the shipping companies gradually switched to trawl fishing with dragnets. Some companies bought a truck for their own transport, and the farm wagons were no longer needed. At the end of the decade, more than sixty of the farm wagons were scrapped by burning them, a fire that lasted several weeks because the height of the flames had to be limited. 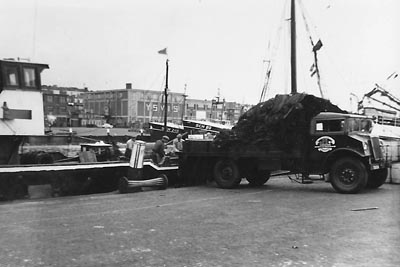 After World War II, the First Canadian Army Corps had left behind large numbers of vehicles in the Netherlands. This equipment was urgently needed for civilian transport, and after some adjustments, vehicles such as this Canadian Military Pattern (CMP) truck were used at the harbor. 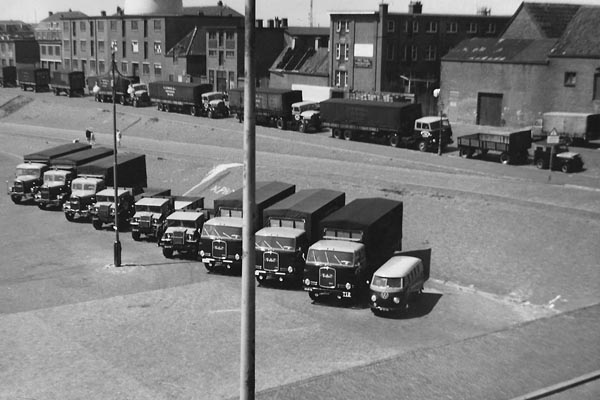 There was a lot of work for the CMP Ford and Chevrolet trucks, and J.W. Thijsse & Zn used them until well into the sixties. They are seen here with the company's transport fleet in the mid sixties, including Mack trucks on the left, MAN diesels in front, and one of the Jeeps at the top right. 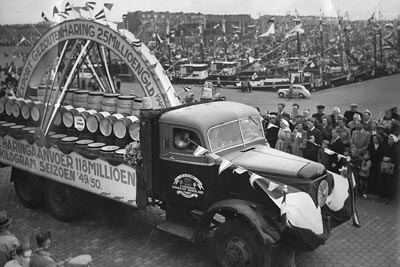 There is a closer look at the company's hand-painted logo on the truck cabs, in the larger copy (190K JPEG) of this beautiful photo of one of the Macks in a 1950 parade at the harbor, celebrating Scheveningen's annual catch.

See also a beautiful big photo of one of the Jeeps pulling a float at the opening of the 1955 fishing season, in Everybody Loves a Parade on CJ3B.info. 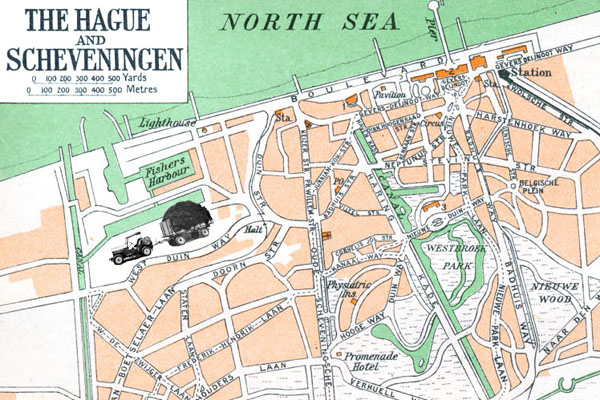 The first inner harbour at Scheveningen was completed in 1904 and the second inner harbour in 1930; both can be seen in this detail of a map of The Hague (470K JPEG) from 1932. The landscape of the area was later changed somewhat following World War II, with the elimination of massive fortifications built by the German army as part of the "Atlantic Wall." 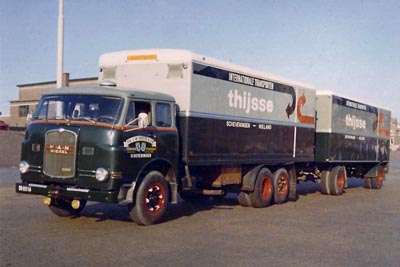 But before long the company was buying trucks built in Germany, such as this mid-1960s MAN cab-over-engine diesel. The color photo reveals the J.W. Thijsse green/gray/orange paint scheme. 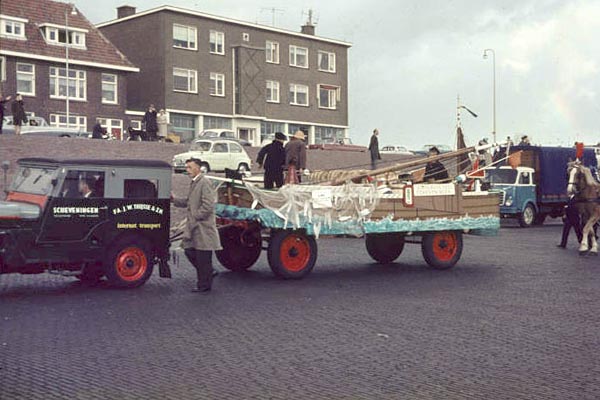 A parade on 30 November 1963 was the occasion for this surviving color photo showing the paint scheme as applied to the Jeeps. The photo also shows that there were still draft horses around in 1963, at least for parade duty. 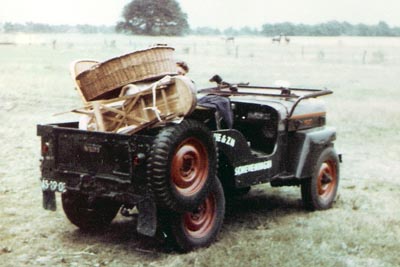 For a Jeep there was always work to do, even after the fishing season, which lasted from the end of May to the end of December. The Thijsse family moved to a large holiday residence in Kootwijk, and here NS-19-05 (with the missing headlight) carries items including the ironing board and laundry basket. 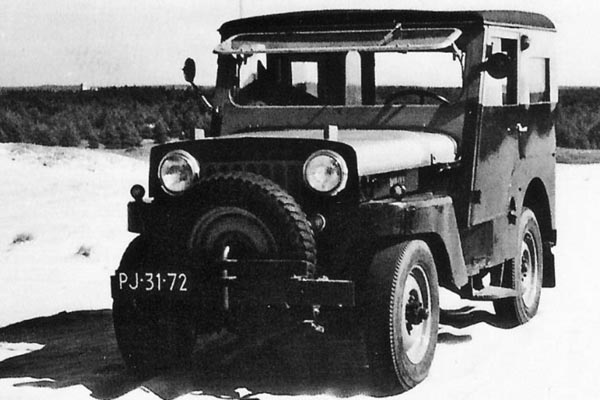 The company wore out several Jeeps in the course of time. The final CJ-3B (also seen pulling the parade float above) was equipped with a closed body and a ventilating windshield, as well as the front fender skirts.

In the mid sixties, the company exchanged the old Jeeps for two Nekaf M38A1 Jeeps from the Dutch Army, from the military car dump at Dirk van Dam in Zeist. 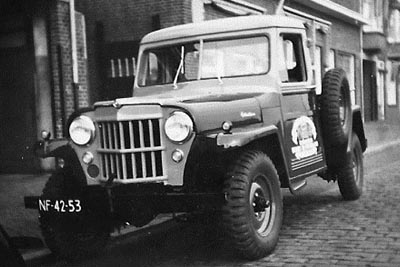 This Willys pickup truck had been in use for a few months when this photo was taken, but it turned out to be less practical than a small Jeep. The license plate for this truck was issued in March 1952. At the end of the fifties a Forward Control Jeep (model FC-150) was tested but not purchased.

The company J.W. Thijsse & Zonen was dissolved in the 1990s, but Scheveningen Harbor is still home to an active North Sea fishery. 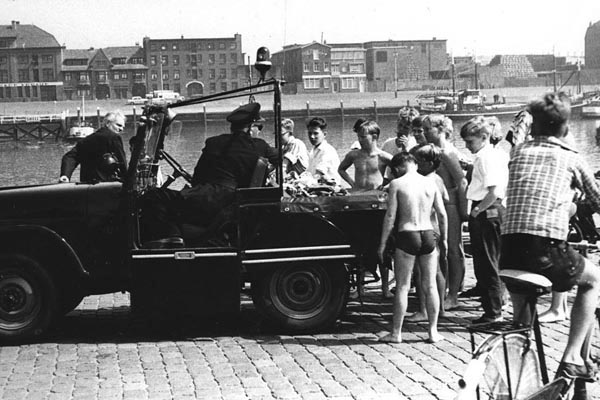 The Hague Police also supervised the harbor in their Jeeps, especially in the summer when local youngsters wanted to cool off in the water. This usually happened in the first inner harbor where the jetties were placed over a slope. Swimming was dangerous there, and if the police caught you they confiscated your clothes and you could walk behind the Jeep to the police station. Then the happy parents could come and collect their children.

See more photos of Police Jeeps of The Hague on CJ3B.info.


Thanks to Jan Hogendoorn for this wonderful piece of history, and for the photos from the collection of his late uncle J.W. Thijsse. Thanks also to Jan Thijsse of Scheveningen, whose memories provided much of the story. -- Derek Redmond

The coat of arms at the top of the page is a variation of the Scheveningen coat of arms (40K JPEG) done for CJ3B.info in green and orange to recognize J.W. Thijsse.