Jeep collector Davis Liddle in India sends us the story of his purchase of a CJ-3B in Asothar in northern India, and its 500km journey to Delhi. The 1954 Willys has an interesting history; it was originally imported by Mahindra & Mahindra for the Indian Army, and was later purchased as surplus by the ruler of the "princely state" of Asothar in northern India. (Princely states were small areas of the country where a king or "Thakur" retained some autonomy of local government under the British Empire in the early 20th century, and in some cases still enjoys elevated status and the use of a palace today.)

In this case, the Kunwar of Asothar used the Jeep for the regal sport of hunting, known as shikar. Traditionally done while mounted on an elephant, big game hunting readily adopted Jeeps when they became available in India (see the story of Bungalow Bill on CJ3B.info.) But times change, and hunting was outlawed in India in 1972. The Jeep was hidden away in a garage under the Fort of Asothar. This is where Davistine's story begins. -- Derek Redmond 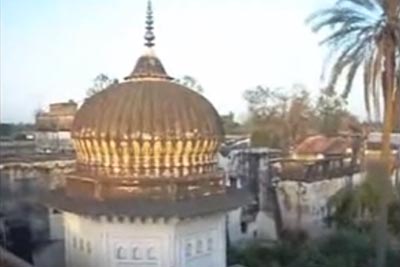 I am a big fan of CJ3B.info and I love these 4x4's. I am sending photographs of a 1954 CJ-3B which we bought from the Kunwar of Asothar (small princely state of india at the time of British India.) This Jeep was an army disposal Jeep which was used by the Kunwar of Asothar for hunting. It is an example of an early CJ-3B imported by M&M for Indian Army use. 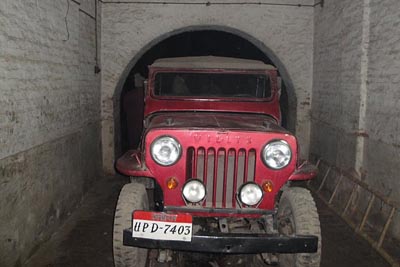 The history which I know about this Jeep was that it was imported CKD from Willys Overland for the army. Then it was auctioned to Mr Lal Chandan Singh of Asothar (Royal Kunwar of Asothar) possibly in the 1970's. The Jeep was used by him in local elections, for shikar, and other day to day purposes. And after some time when the parts were hard to find and petrol became costlier, and after the death of Mr Lal Chandan Singh, this Jeep was kept in a garage. 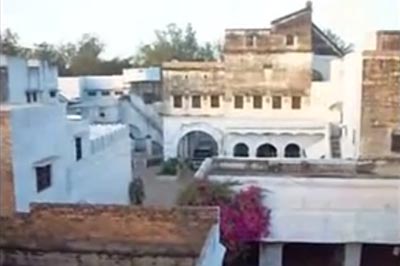 Then in 2010 I came to know about this Jeep. Asothar is a small area, closer to nature. It was a beautiful place and there was a small old fort of the Raja of Asothar, where both Raja and his brother (the late Mr. Lal Chandan Singh) lived. I met his son Mr. Chandrapratap Singh who is a nice person and showed me the Jeep. 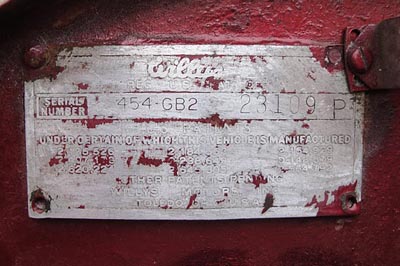 After looking once it seemed OK. The heart of the Jeep was replaced by a Solex carb and the dynamo was replaced by an alternator, the fuel pump with an electronic pump. Other than that, everything was original. There was a 1951 Ford Custom also next to this 1954 CJ-3B. I left the place to make arrangements. 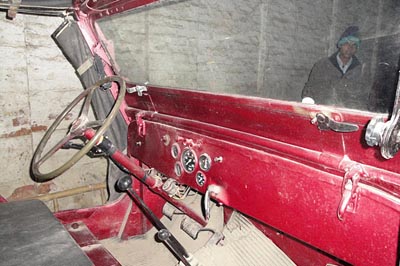 After a month I came back to the same place with Mr Manhadev Singh. He is a collector with a good collection of Jeeps and classic cars. We reached there in the morning, and not wasting a single minute we pulled out the Jeep from the garage. 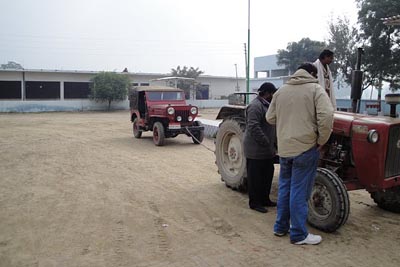 It's very difficult to move a jammed Jeep and utimately it refused to start. Now we prepared for the worst. There was sludge and everything was jammed. 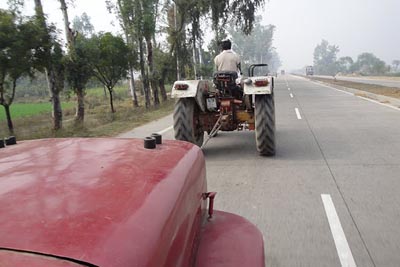 We tried a local mechanic, who did his job. He freed the wheels, and although the brakes refused to work we started our journey to our final destination Delhi, which is around 450km (300 miles) from there. 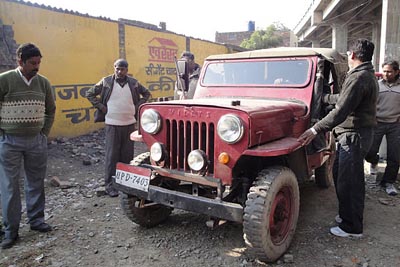 But after covering 100km, the Jeep broke down in Kanpur. Now we had no other choice left -- the Jeep was loaded into a truck and transported to Delhi.

I think currently this Jeep (restored) is in Punjab -- I don't know much about its whereabouts. -- Davistine Liddle 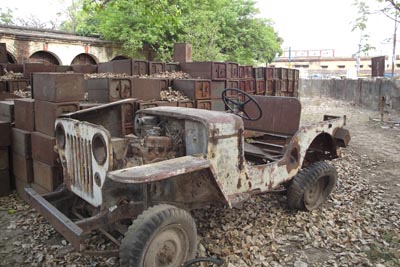 Thanks to Davis for sending the photos.

He's still on the lookout for Jeeps to save, although they're not all as nice as the one in Asothar. He sent this photo he took in Gorakhpur in early 2014 of a former government CJ-3B which was scheduled to be auctioned. -- Derek Redmond