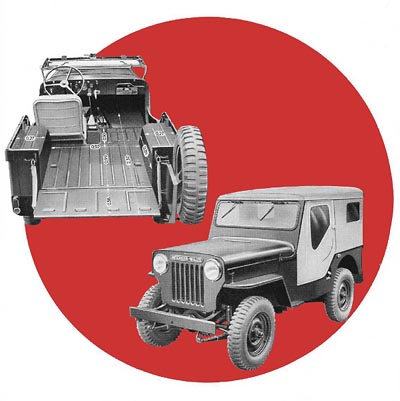 The French company Hotchkiss reportedly produced 3,496 units of its JH-101 version of the CJ-3B under licence from Willys, between 1955 and 1960.

This illustration from page 3 of an early brochure scanned by Jean-Claude Guerry, includes interior dimensions and shows features including a swing-away spare tire carrier, taillights with separate reflectors, and a glove box in the dashboard. The ventilating windshield has latches at the bottom, and top-mounted wipers. 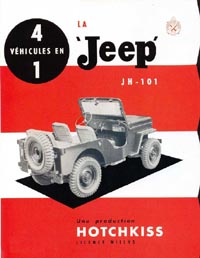 Page 1: A larger copy of the photo (100K JPEG) gives a better look at a unique detail: European-style turn signals including mechanical swing-out indicators mounted in the body side panels. This and the spare tire carrier may have been optional or may have been discontinued, as they don't show up in later photos seen on the Jeeps in France page. 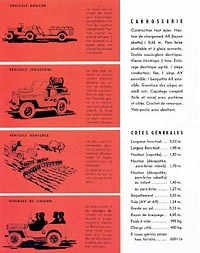 Four sketches show the Jeep in use as an economical delivery vehicle, an industrial vehicle with additional equipment, an agricultural vehicle capable of cultivation and mowing, and a vehicle to carry passengers safely over all terrain. 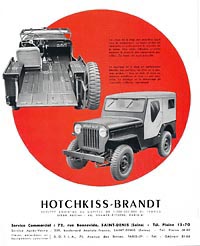 Page 3 gives the full name of the company as Hotchkiss-Brandt, and lists addresses in Paris and Saint-Denis for various departments. The text reads:

"The seats of the Jeep are removable (except that of the driver). The rear gate folds down to extend the length of the floor. The tailgate is is also removable.

"The roof of the Jeep is perfectly watertight. The doors, the sides and the rear panel -- all in fabric and mica on a tubular metal frame -- are removable. The assembly or the disassembly of the unit can be carried out quickly." 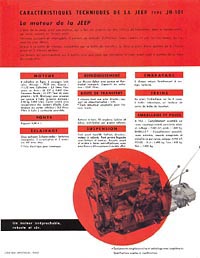 Page 4: Much of the back page is devoted to the merits of the Jeep motor. The irony is that Hotchkiss was not using the Hurricane as the standard engine in the JH-101; they were using the older flathead engine that was also going into their M201 version of the Willys MB. They soon made the Hurricane available as an option.

"The heart of the Jeep is its engine, which proved reliable over millions of kilometers worldwide, on roads and all terrain.

"Responsive, powerful and untiring, it allows the vehicle to carry out, at any time year round, work of all types.

"Thanks to its gearbox and its transfer case, the Jeep has a range of 6 speeds forward and 2 speeds reverse."

Thanks to Jean-Claude Guerry for scanning the brochure. -- Derek Redmond

For more on Hotchkiss, see Jeeps in France. Also on CJ3B.info, see a brochure for Hotchkiss Fire Jeeps.