A Trip to Burma

Back in 1983, a friend and I decided to visit Burma (now known as Myanmar), a former British colony between India and Thailand. Burma was quite an exotic destination at the time, with only 5,000 visitors per year. Getting there was easy enough by air, but everyone got only a one-week visa, so it was necessary to plan an itinerary in advance. Most people included the cities of Rangoon (now Yangon) and Mandalay, and so did we.

Burma was in many ways a time capsule of earlier days and this also reflected in the vehicles seen. There had only been a trickle of newer imports for several decades and large numbers of trucks and cars from World War II and the early postwar period were still in everyday use. 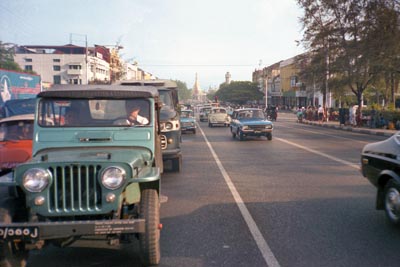 This street scene from Rangoon shows an uncharacteristically modern mix of vehicles, many of them hardly ten years old. Those with black registration plates were privately owned while public transport had red plates. The CJ-3A is the oldest vehicle in view but still appears to be in good condition. At the far end of the street is the famous Shwedagon Pagoda: 99 m high and gold plated. 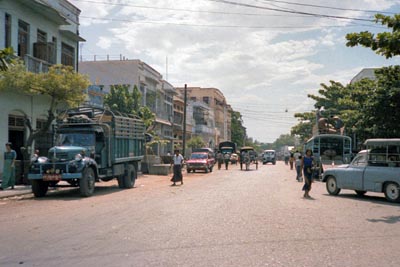 A more representative sight in 1983 was this busy back street. On the left is a 1941 Dodge truck and a red 1979 Toyota pickup, and on the right a Czech Skoda 1201 pickup from the 1950s. In the distance a CJ-3A is coming up the street, passing a GMC 2-1/2 ton truck parked at the curb, and sprinkled throughout is a mix of horse carriages, pushcarts and unhurried pedestrians. 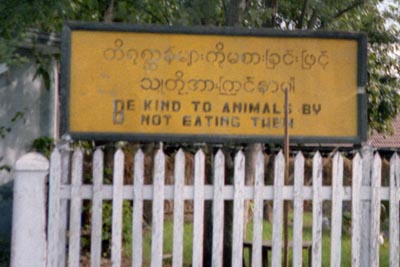 Burma was a devout Buddhist country and religion played a large part in the daily life. This sentiment of this roadside sign is clear enough, if a bit unusual to Western eyes. 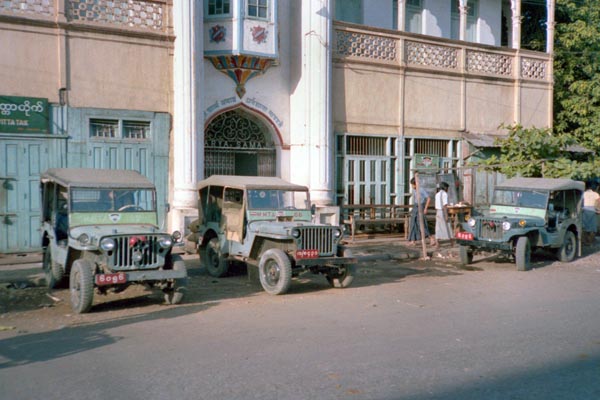 The wartime Jeep still had an important place in the transport industry and the Burmese were clearly adept at keeping these relics in service. These three Willys MBs (or Ford GPWs) on the streets of Mandalay were largely in stock configuration, down to the original tops, even if two of them had new headlights fitted. The red plates show them to be taxis or rental cars. 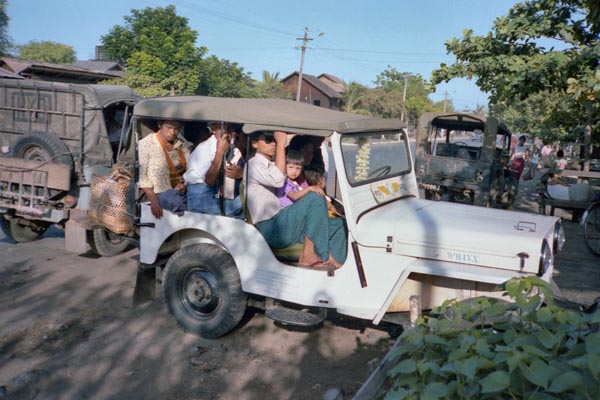 How many people can you fit in a Jeep? This one has at least nine aboard but is still waiting for the driver, and perhaps more passengers. The use of wire loops instead of hood blocks, as well as some other details show that this CJ-3B was manufactured by Mitsubishi in Japan. 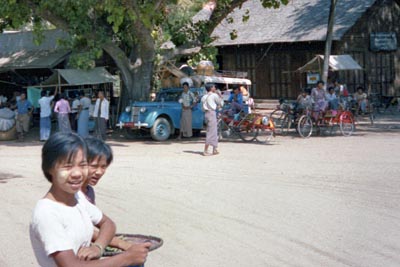 The Pagan (or Bagan) area in central Burma, with its 10,000 temples -- mostly in disrepair -- is one of the great tourist attractions in the country. But in 1983 amenities were still modest and most transportation was drawn by horses, or oxen. This pickup truck seen in the town of Nyuang-U was modified from a 1940 model Austin 10 and was in fact one of the few motor vehicles spotted. 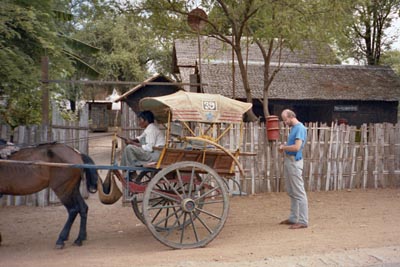 As crude as the Jeep might seem as taxi, it was positively luxurious in comparison with some of the other public transport in Burma. Here my friend Fred has just paid off the horse cart we used to go to the Post and Telegraph Office in Pagan, where I sent a telegram of congratulations to a friend in Sweden who was getting married. 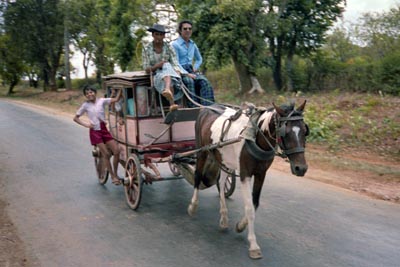 Travellers in the rural areas around Mandalay (and probably also elsewhere) often used these remarkable little single-horse stagecoaches. Presumably introduced by the British in colonial days, they look like a cross between a Wells Fargo coach and an Amish buggy. 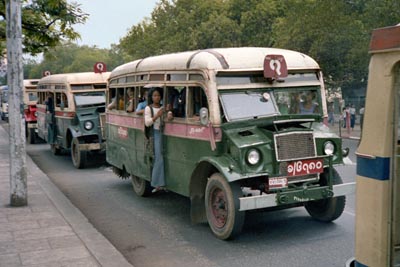 In the cities, people travelled on buses which were usually converted from WWII army vehicles. Most of them were based on trucks with Canadian Military Pattern (CMP) type 13 cabs. These colorful and fully loaded examples in Rangoon all carry the route number 7 in Burmese numerals. 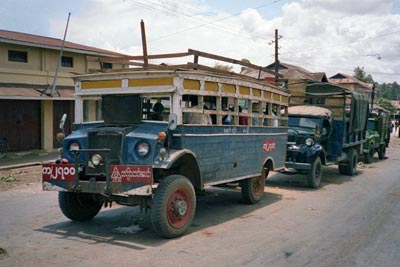 Another common style of bus body, made out of wood: thick planks of prime teak. In the West, the cost of the same amount of teak would likely exceed the cost of a new bus of similar size. This body style was apparently geared towards rural use and allowed a fair amount of luggage to be carried on the roof. Behind the bus is another one of the ubiquitous 1941 model Dodge trucks. 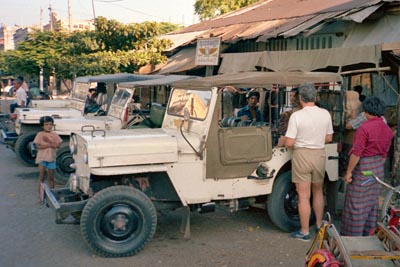 A nice selection of Jeeps available for hire outside a streetside transport office in Mandalay. The nearest one is a Mitsubishi-built CJ-3B, as seen from the brackets/handles at the rear corner and filler cap, the wire loops on the hood and -- not least -- Mitsubishi name on the hood side. The apparatus fitted on the underside, below the driver's seat, is a bit of a mystery item. 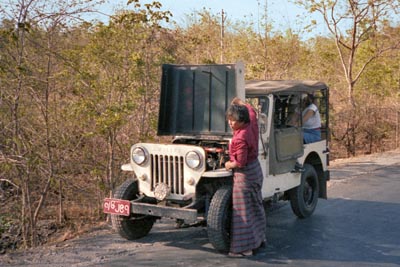 The very same CJ-3B as in the previous photo, stopped outside the city with a spot of mechanical problem. Nothing the driver couldn't handle, though: minor malfunctions were just part of his daily life. In this view the Mitsubishi mark above the grill is clearly visible, as is the massive electric horn. 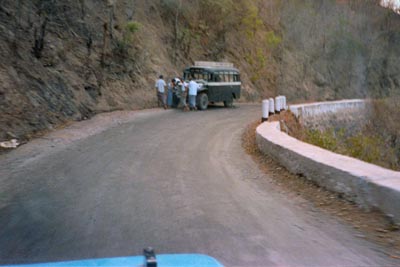 One of the most memorable occasions of the Burma visit was a Jeep trip up in the hills above Mandalay. On the way back, the driver turned off the engine at the top of the hill -- presumably to save fuel or engine wear -- and then just rolled for the entire one-hour journey back down to the plains. At every corner, he pumped the brakes madly and screeched through the turn. About halfway, we made a brief stop while the driver threw a bucket of water on the wheels to cool down the brakes.

We soon decided that the only thing to do was to hope that the Buddha smiled on us, to stop worrying and instead sit back and enjoy the strawberries we had bought before setting off.

This is the view across the hood from my shotgun position as we came upon a local bus converted from a Dodge Personnel Carrier, which had overheated on the way up the mountain. It was surrounded by a cloud of steam. 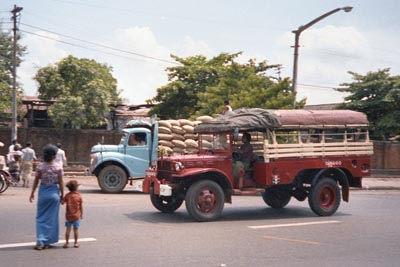 Another Dodge seen in Rangoon, which had also started out as a 6x6 WC63 during WWII but had been converted to 4x2. The front wheels look like they came off of a Toyota FQ15 (a Dodge M37 look-alike) and the rear ones -- or more likely the whole rear axle -- possibly from some sort of Bedford or Austin truck. 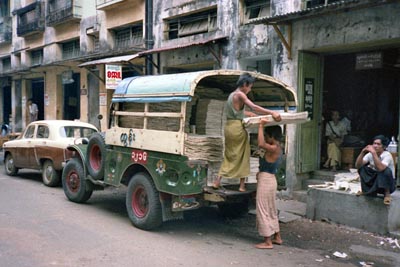 This Dodge Weapons Carrier, in comparison, looked like it had been largely left alone, apart from the rear wheels and the new roof. It was loaded with what looked like thick sheets of stiff paper. The car in front of the Dodge is a Soviet Moskvitch 407 from the late 1950s. 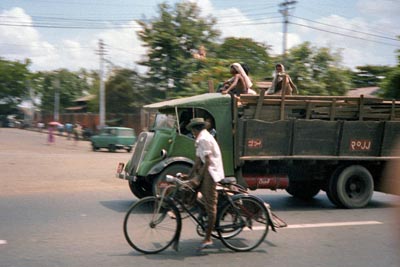 The oldest truck design spotted in Burma in 1983 was the Fordson Thames 7V, first introduced in 1937. However, the model remained in production until 1947 so this particular example may only have been 36 years old... 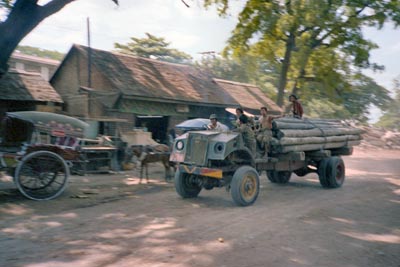 Finally, one of the most remarkable vehicles was this lumber truck making good speed on a small road near the Irrawaddy River in Mandalay. It had been cobbled together from who-knows-what components, topped off with a stripped CMP cab. The general state of the vehicle would have reduced any European or North American traffic policeman to tears.

All photos © Leif Hellström. Special thanks to Sven Bengtsson for help with some of the vehicle identifications.

And thanks to Leif for this travelogue. -- Derek Redmond

The flag at the top of this page was the official flag of Burma/Myanmar from 1974 to 2010.