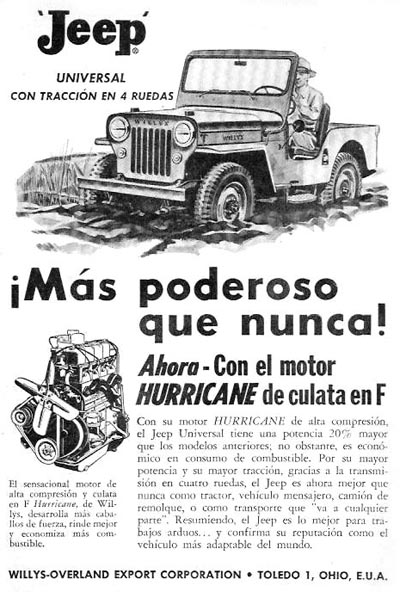 This ad found by Rafael Terán comes from a 1953 issue of Reader's Digest (México), and it's a fairly rare example of a Latin American ad for the CJ-3B. After the debut of the CJ-5 in 1954, most countries preferred the new "dog-eared" Jeep. But this ad appeared when the 3B was still the newest model, and the text reads:

More powerful than ever!

Now, with the F-head Hurricane motor. With the Hurricane's high compression, the Universal Jeep has a power 20% greater than previous models; but is economical in fuel consumption. With its greater power and its greater traction, thanks to the four wheel drive, the Jeep is now more than ever like a tractor, delivery vehicle, trailer truck, or transport that "goes anywhere". Summarizing, the Jeep is the best thing for difficult jobs... and confirms its reputation as the most adaptable vehicle in the world.

The drawing seems to have a connection to the illustration that appeared on Kaiser-Willys brochure KW-1763 in the U.S. 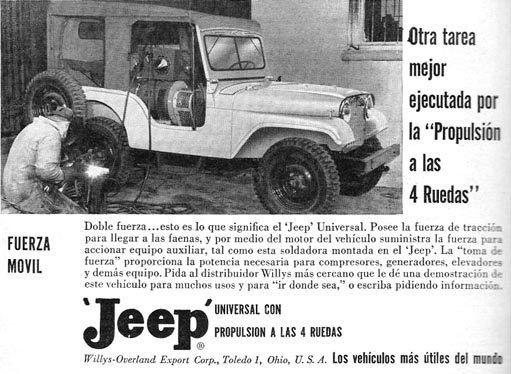 A 1955-56 series of ads for the CJ-5 in Mecanica Popular (Edicion Mexico) featured photos of Jeeps in industrial roles, with the same heading for each:

Double force... this is what the Universal Jeep means. It has the tractive force to arrive at the job, and by means of the vehicle's motor it provides the force to drive auxiliary equipment, such as this welder mounted in the Jeep. 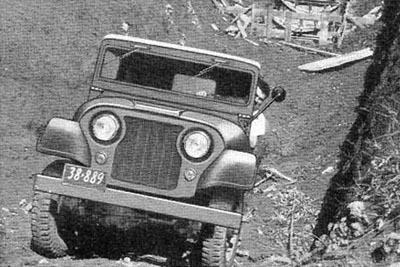 Where the roads finish and the land becomes high and rough, you can trust the effective tractive force of the 4 Wheel Drive of the Jeep Universal, to arrive at the job site. With a Jeep you can climb steep hills, maneuver through thick forests, drive over loose rocks and sand... and arrive at your destination! Because of that the Jeep has become essential equipment for engineers, contractors, geologists, miners and carpenters. 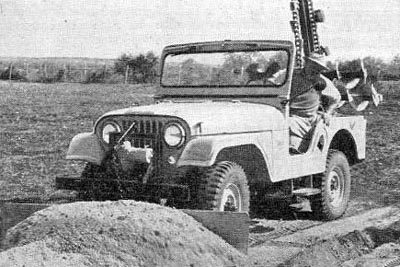 The Jeep Universal with a front-mounted blade, driven hydraulically, is an efficient filler. Here is a demonstration of a blade mounted on a trencher Jeep... with which it's possible for single motorized unit to execute both operations: to dig and to fill up. 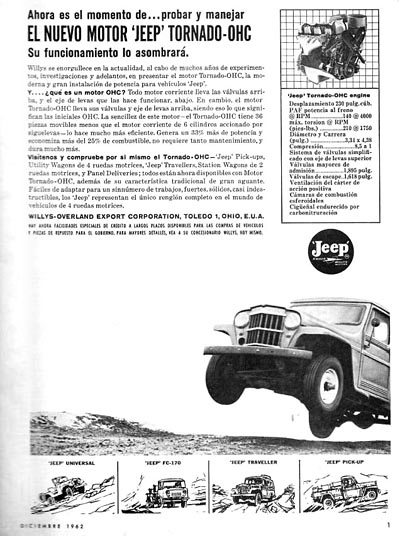 A later advertisement for the Tornado OHC engine features a photo of a Jeep pickup grabbing some air. It reads:

Now is the moment of proving and handling the New 'Jeep' Tornado-OHC motor. Its operation is astonishing. Willys is proud, after many years of experiments, investigations and advances, to present the Tornado-OHC motor, the modern installation of power for 'Jeep' vehicles.

And what is an OHC motor? All current motors have the valves and camshaft below. However, the Tornado-OHC motor has its valves and camshaft above, which is what the initials OHC mean. The simplicity of this motor -- Tornado-OHC has 36 moving parts less than the current 6-cylinder motor -- makes it much more efficient. It generates 33% more power and saves 25% of fuel, it does not require as much maintenance, and it lasts much longer.

The ad also includes a "Kaiser-Willys Motors Jeep" logo that I've only seen in another 1962 ad from Mecanica Popular (see Jeep Ads for South America).

Thanks to Rafael for finding the ads. -- Derek Redmond

See also some ads for VAM Jeeps in Mexico and some Jeep Ads for South America.