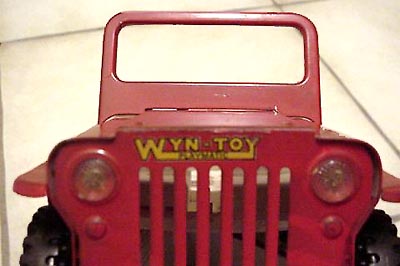 Does this look familiar? Yep, it's the familiar snout of the Tonka flatfender, as built in New Zealand by Wyn-Toy, for the downunder market including Australia. This one belongs to Clinton Kempnich, who says, "The Wyn-Toys were probably better looking than the Tonkas, with better wheels and greater detail in decals and paint. They made an army version that is really cool. Tonka themselves also made variations in NZ and Australia. These vary to the US ones in colors and other details." 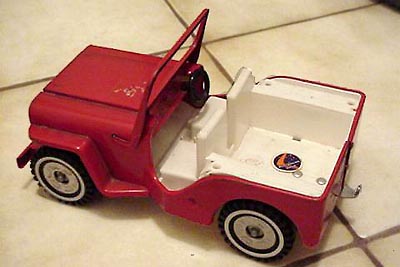 One noticeable difference between the Wyn-Toy and the American Tonka is the wheel and hubcap design. The Wyn-Toys apparently have a whitewall painted on the tire rather than a separate insert; and a hubcap with the center cut out, to avoid the problem of having to fit over the axle cap.

Clinton says, "The little sticker in the back is a 'Buy Australian Made Sticker' with a boomerang and the Southern Cross shown. In the 60's there was a push to buy local as we were getting flooded with OS stuff. As with most NZ companies they had their main set-up in Australia as we were their main market.

"I suppose they had trailer accessories as well but I have not seen any. The Wyn-Toy does have a substantial tow bar hook." 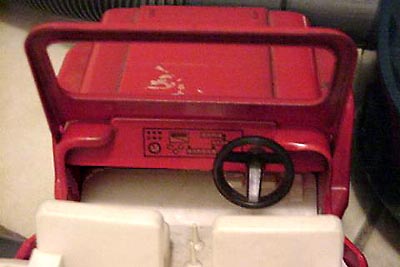 The other obvious unique feature of the Wyn-Toy is the right-hand-drive, including correct placement of the pedals in the plastic floor, and the somewhat fanciful dashboard decal.

Thanks to Clinton for these photos. It would be interesting to see any other varieties built downunder by Wyn-Toy or by Tonka, and to find out if any were exported beyond Australia. Further photos or information is welcome. -- Derek Redmond