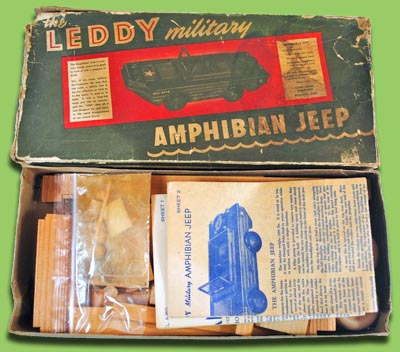 Dogged detective work paid off for Mark Eaton of Spokane, Washington, who located an unbuilt example of this 1:14 scale GPA amphibious jeep kit, in its original box from Leddy Model Industries, a company located in Watsonville, California which produced ship model kits.

We had previously seen two assembled versions of this large model of the World War II Ford GPA (also known as a seagoing jeep or "seep") but could not determine who manufactured the kit. -- Derek Redmond 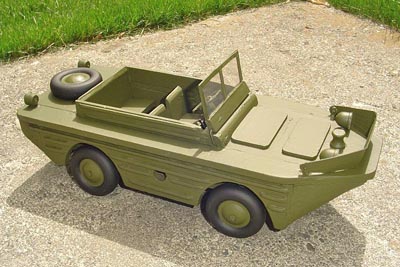 Mark found this example in 2014, and said, "I have been looking for details on this large-scale, all-hardwood model. It is the exactly the same model that Dan Eastwood had tried to find information on back in 2009 (see below). Mine was only missing a few items when it arrived, and it will go into my collection of WWII wood models. I plan on adding a whip antenna to it as well as markings pertaining to the kit format." 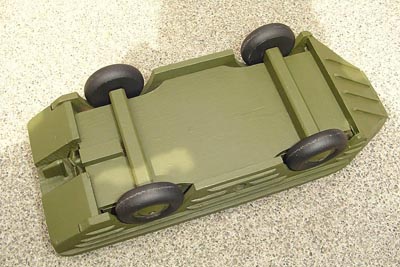 The assembled model is 13 inches long, and prior to finding the Leddy packaging, Mark suspected it may have been manufactured by Mod-AC, the same company which produced a smaller 1:24 scale wooden kit (see below).

Mark had also found what appeared to be the same wooden kit, listed in a 1944 Shure Winners catalogue on page 227 (400K JPEG). The massive (over 1000 pages) catalogue of novelties and general merchandise was published for many years by the N. Shure Company, a Chicago mail order house. It didn't identify the manufacturer. 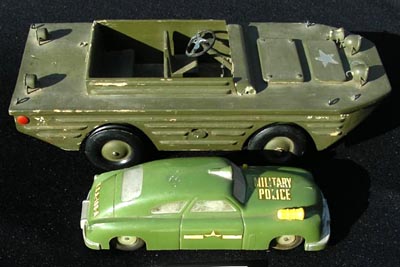 Dan Eastwood sold this example on eBay in early 2009. Prior to selling it he attempted to confirm its origins, but found no definite information: "I do not know who originally made this wooden model. The scale is approximately 1:14, and there are no identifying marks on it as to its origin. Mod-AC Mfg. Co. is known for manufacturing 1/24-scale wooden models of jeeps, Army half-track trucks, etc. but this one is a much more impressive size. This photo shows its size in comparison to a 1/24 scale car." 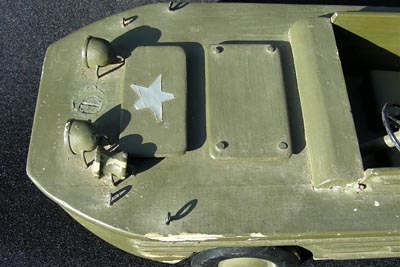 Prior to the identification of Leddy as the manufacturer, Dan had speculated, "One possibility is that during WWII wooden model kits of several military vehicles were used as incentives to encourage the sale of war bonds. Because the model seems to have been carefully crafted, it also might have been a desk-display model given to US Government 'customers' by Ford in gratitude for their contract, or made by the US Army Training Center as a model for contract discussions." 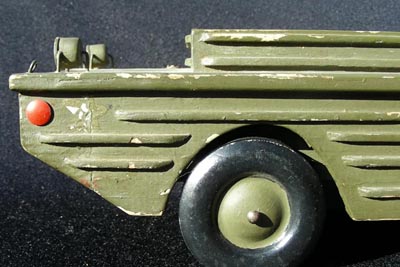 "All four wheels roll smoothly (see a bottom view, 70K JPEG.) The water-propellor (110K JPEG) turns only slightly. I've gently blown the dust off the model but it could use careful cleaning and possibly some touch-up paint in spots. The steering wheel (100K JPEG) is thin wood that broke at some time in the past and was crudely repaired with hot-melt glue by a former owner."

The Seep in Action 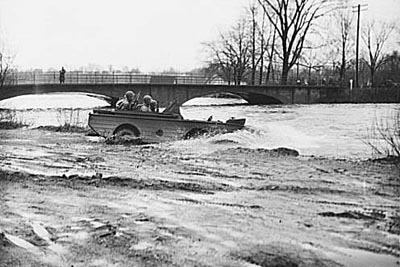 The body of the Ford GPA (G=Government, P=80" wheelbase, A=Amphibious) was designed in 1941 by Roderick Stephens Jr. of Sparkman & Stephens Inc. yacht designers, but it was not as successful as his earlier design for the DUKW six-wheel-drive amphibious truck. This photo shows testing near Detroit during World War II. Total production by Ford is reported to have been 12,778 vehicles, many of which went to Soviet Russia (see Wikipedia.) 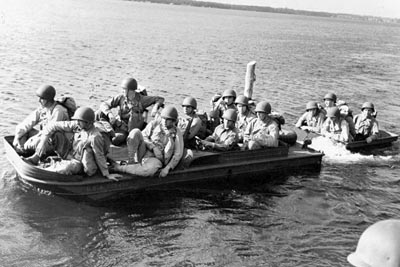 In service, however, the seep was found to be too low in the water, and too heavy on land. Thirteen people in a seep and a trailer as seen here, might be risky even in calm water. You can find more details on these interesting vehicles elsewhere on the web, including the story of "Half-Safe", a GPA that was sailed and driven around the world (from 1950-1958) beginning with an Atlantic Crossing in a hurricane!

The packaging of the 1:24 wooden kit produced by Mod-AC Mfg. in 1943 promised that the "U.S. Army amphibian jeep (Quack) will lead the invasion of the Axis countries," and mentioned it had already seen service "from New Guinea to Kharkov." (Kharkov, at the time the biggest city in Ukraine, was largely destroyed in four major battles between German and Soviet forces from 1941-43.) 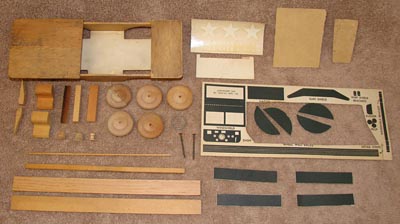 The Mod-AC kit contained pre-cut wooden parts and cardboard details, as well as decals and sandpaper. When assembled it is 7 inches long. This example sold on eBay appears to have a metal steering wheel casting, which may not be original. 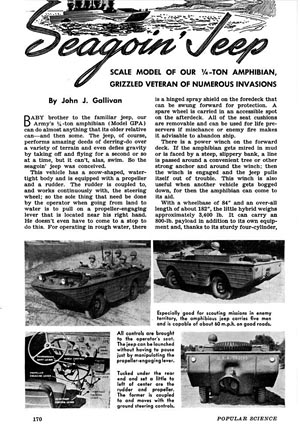 Bill Kolar of Clovis, California came across this article and set of plans published in Popular Science in May 1945, and wondered if it might be connected to the large wooden models found by Mark and Dan.

The first page of the article "Seagoin' Jeep" calls it a "grizzled veteran of numerous invasions," but the text seems primarily based on Ford press releases rather than actual reports on the use of the GPA in theater. The second page of text (300K JPEG) describes step-by-step how to build a wooden model from scratch, and includes a photo of the completed model. 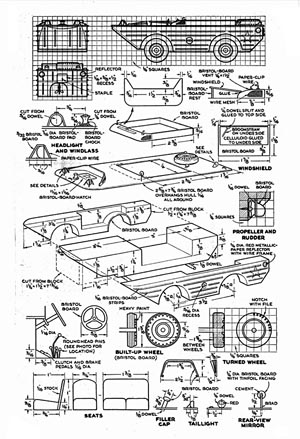 The plans do have a lot of similarities to the Mod-AC kit, with the principal difference that the body is cut from three solid blocks of wood, rather than from thin hardwood sheets. The scale is again 1/24, so if someone were to use the plans to build a larger version, the scale would likely be doubled to 1/12, rather than the 1/14 of the models seen above.

Speaking of large models, Bill says he plans to construct a 1/6-scale replica of the GPA, so we can look forward to perhaps seeing that in the future.

Thanks to Dan and Mark for taking photos of this unusual model, and Bill for the plans.

There have been many other miniature versions of the Ford GPA -- this would be a great topic for a future article on the Toy Jeeps Pages. -- Derek Redmond