For a while now, some of us have been having some fun photographing toy Jeeps against real world backgrounds. It's another way of appreciating the craftsmanship that goes into a nice model, or just seeing the toy in a new way.

Steve Mark of Kansas City has taken this idea a step further, by creating a virtual 3D model of a Tonka Toy Jeep, whose color, position and size can be manipulated on screen, before it is placed into a background photo.

Click on any of Steve's pictures for a large version (100K) suitable for use as an 800x600 desktop picture. 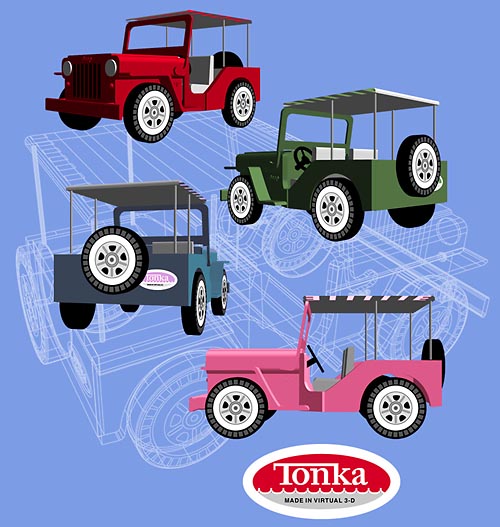 Working primarily from the side view photo on the Dispatcher Details page, Steve created a wire frame 3D model (seen behind the Tonkas here) which can be rotated into any position. It is then given details, color and lighting, and rendered to produce a final version which can be placed in front of a background. 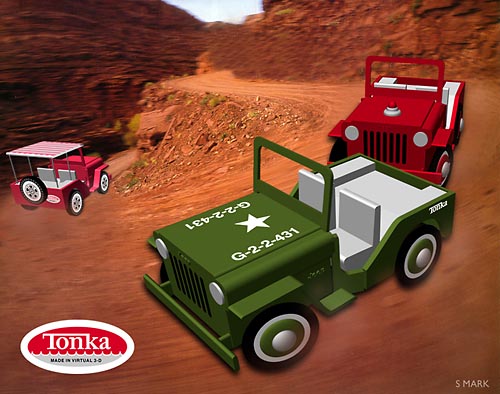 Steve says, "The programs used to create the digital pictures, were Adobe Illustrator 5.5, Adobe Dimensions 2.0, and Adobe Photoshop 3.0. The images were created on a Power Macintosh G3/266, with 416 megs of RAM, a Hewlett Packard ScanJet 5P, and a Sony DCR-TRV320 digital camcorder, with memory stick. High resolution versions of the digital images were created at 300 dpi. The bigger files are 25-30 megs each. You can still use old software and a 4 year old Macintosh, to create really nice images." 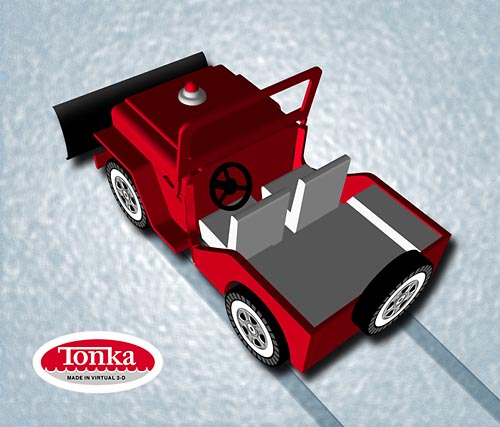 "Everything in this picture is virtual, even the snow. Its was a lot of fun playing with, on a cold winter's day in the midwest! The Jeeps are not exact dupes, because of the limitations of the 3-D program, and the processing time to render it out," comments Steve, who has obviously played with a few real Tonkas in his time. 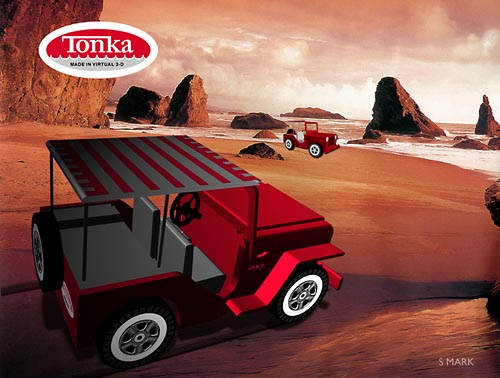 "Here's a drawing of a 3-D Tonka on the beach. I really like the lighting on this one. All of the photo backgrounds are out of Jeep catalogs. There is a real Jeep Wrangler hidden behind the virtual Jeep in this photo."
Thanks to Steve Mark for the great illustrations. -- Derek Redmond