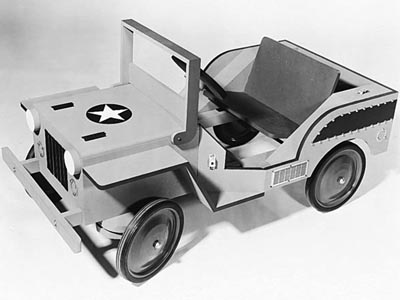 This Jeep is Plan No. 410 from U-Bild, a company that has sold plans for wooden build-it-yourself projects by mail order for many years. As of 2021 it's still available on the U-Bild website, so I expect there are still people building this Jeep. If you have photos of one you've put together, I would be happy to post them here.

The project requires one sheet of plywood, plus some additional wood and other materials. It's designed to be propelled by the driver's legs reaching the ground, à la Fred Flintstone. 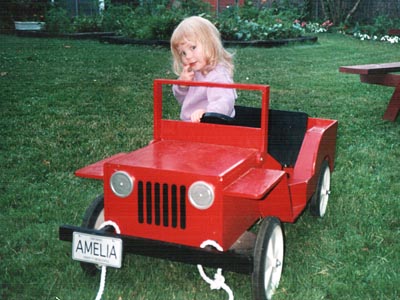 I constructed one for my daughter in the mid-1990s. Pretty basic, with jar lids for headlights, spray paint for the grille, and wheels from a broken wagon. Also a rope to pull her around in it, because the Jeep is somewhat heavy to be moved by little legs. 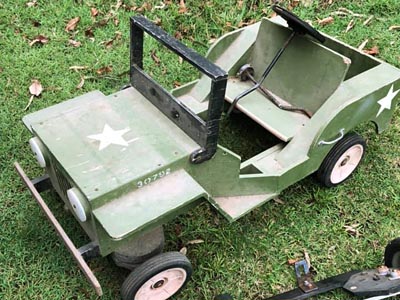 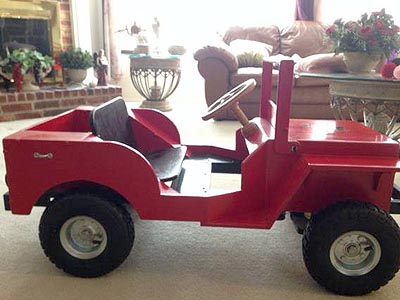 This one sold on eBay in 2013 for $250. See also a front view photo (60K JPEG). Deluxe wheels look good and probably roll more smoothly on grass. 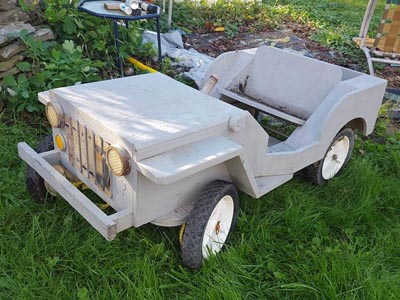 Here's another photo I found on the web. I don't know where this one was located, but it looks like it got pretty heavy use. 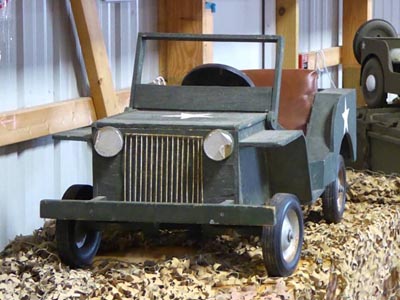 I took this photo at the 2016 Bantam Jeep Heritage Festival, where the Jeep had a place of honor in the Jeep History building, below the display of Jeep grilles from the 1940's and 50's. 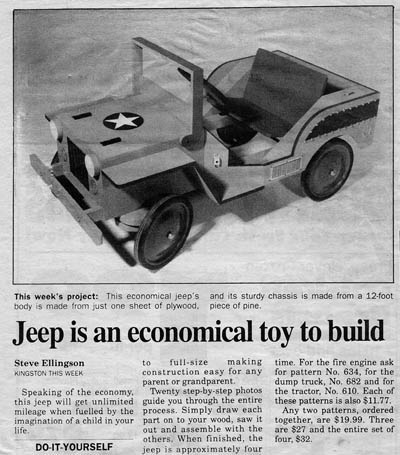 U-Bild's mail-order plans were marketed in the early 1990's with articles supplied to newspapers, which were basically advertisements. This example emphasized how easy the project was, and how economical compared to expensive commercial toys. It commented on the fun of customizing the Jeep by using odds and ends to decorate it and create headlights, speedometer, etc.

The article also mentioned a few of the many other plans available, including a fire engine, dump truck or tractor.


The single sheet of plans and instructions unfolds to about 34x46 inches. 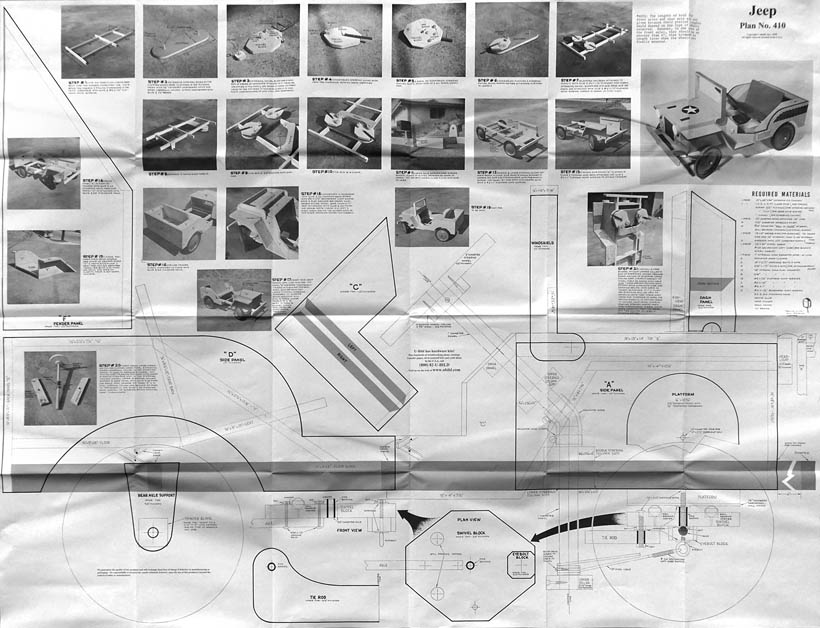 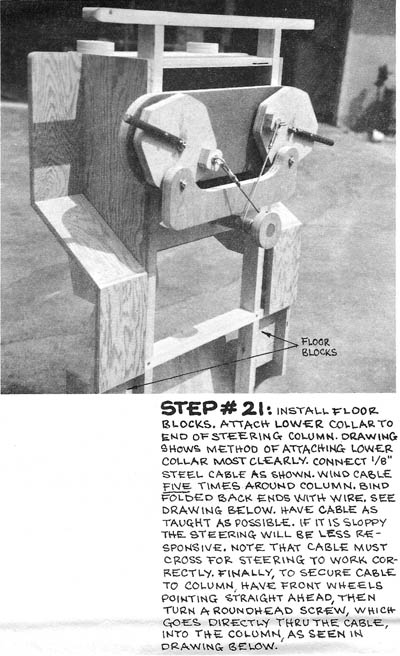 The biggest weakness in the U-Bild design is the steering mechanism, which relies on a cable wrapped around a wooden steering shaft (see Step 21) and does not work very well.

A second problem, more easily fixed, is the middle frame crossmember, also seen in this photo. The crossmember is slightly forward of the seat, so it restricts leg movement and makes propelling the Jeep by foot much more difficult. It can simply be eliminated; note that it is missing in the U-Bild advertising photo above. 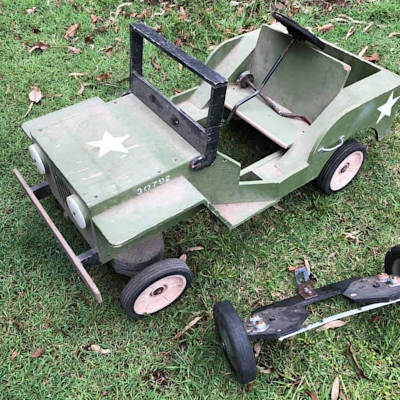 Jeff Spencer explains the modified steering system in the second Jeep he built: "The steering design was a failure so I designed and built my own from a pedal car design.

"What you see here is the 'mark 1' Jeep and the 'mark 2' steering setup. The reason I have another steering assembly is I built a second Jeep several years ago for a preschool, along with a bulldozer and tractor (same plan company.) After the toddlers 'used 'em to death', the teachers returned them to me for refurbishment but alas the Jeep was beyond it. I did salvage the front end which was a improvement from the original design -- the mk2 version.

"The seat in mk1 was a bit too angled which made propelling the Jeep a little harder so I rectified that too." 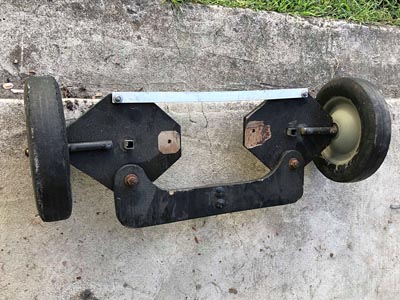 "The mk2 has another aluminum front tie rod to give more lateral stability, seen here in a bottom view. It was added later as a improvement." 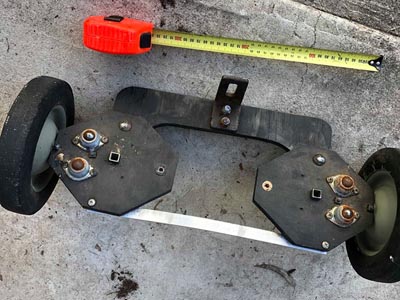 The top view shows the slotted bracket where Jeff's mk2 steering wheel shaft connects, and the ball bearing casters which support the body. 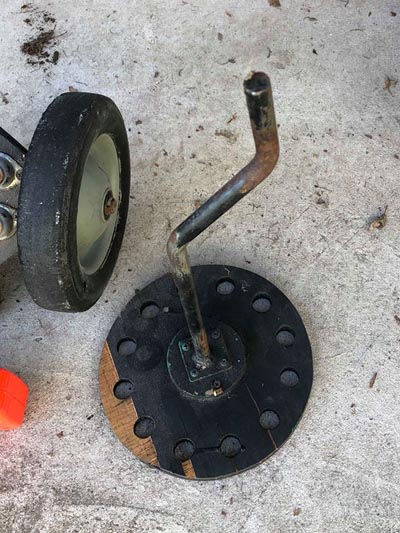 "There is a steering rod which is attached to a wood steering wheel. To support the rod you need a dash plate and second cross assembly to support the turning rod. The rod goes into the slotted plate attached to the tie rod. The system copies commercial Chinese-made pedal cars." 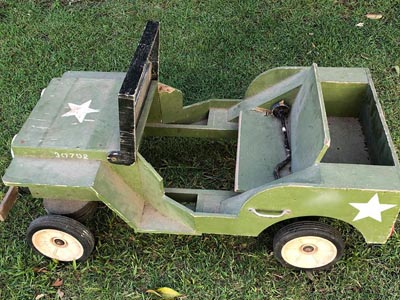 Jeff's modifications also included eliminating the middle frame crossmember, seen in the Step #21 illustration above, which interferes with the Fred Flintstone propulsion.


Thanks to Jeff Spencer for the details on his project. Anybody else built one of these? -- Derek Redmond

If you're interested in a more complicated project, see Junior's Pedal Jeep, a chain-drive wooden Jeep.