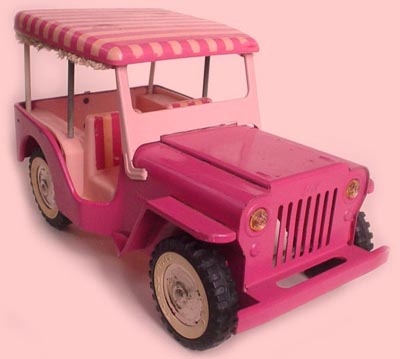 Although I have suggested that the design of Tonka's famous series of Jeep toys was actually based on the high-hood body of the CJ-3B (see Tonka Jeeps Are CJ-3Bs), a popular Tonka Jeep was always the "Dispatcher," named for the 2-wheel drive Willys DJ-3A Dispatcher. From 1962-64 Tonka also sold this Surrey version. 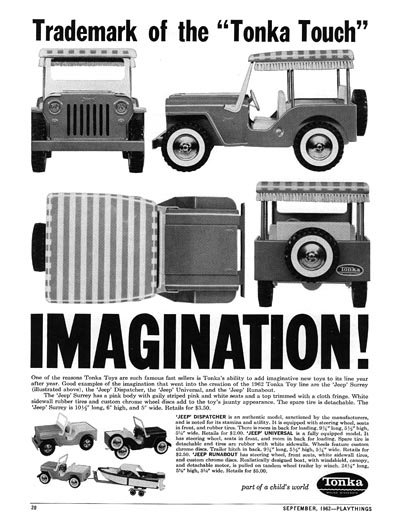 Tonka was clearly proud of their Jeeps when the first four versions were introduced in 1962, particularly the Surrey which was featured prominently in the press release describing their 1962 lineup. See News of the Toy Industry (500K JPEG) from Toys and Novelties magazine, March 1962.

The advertisement seen here from the trade publication Playthings almost seemed to suggest Tonka was claiming the colorful, fringe-topped Jeep as their own idea.

In the article below, Bill Preston describes two pink Willys DJ-3A Surreys purchased by Tonka. They likely provided the company with both design inspiration and promotion, and years later Bill restored one of them to its original condition.
-- Derek Redmond

In about 1982, Grant Wenkstern commissioned me to do the restoration work on one of his two pink Surrey Jeeps in Minnesota. The deal was that I could have one of the Jeeps for the labor to restore the other... not a very equitable trade at the time, but then I was young and only half realized the historical value of the Jeeps.

At this time the two Jeeps were about 20 years old. I believe they were titled as 1962 and looked their age. They were now basically used as junk haulers around a golf course owned by Grant. He owned Lakeview Golf and Red Oak Golf, both in the Lake Minnetonka area of Minnesota. 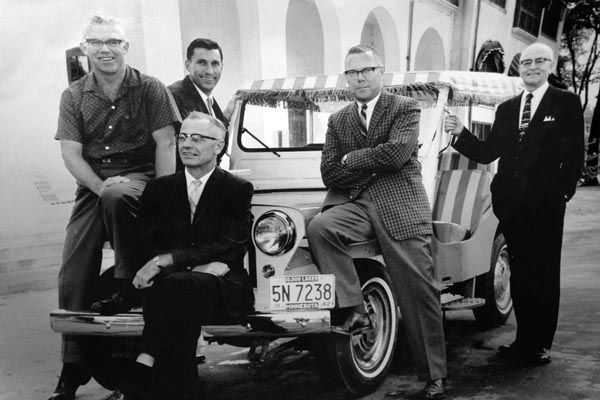 Grant's dad's was Russell Wenkstern, who was the chief executive of the Tonka Toy company from 1961 until 1977. Russ was instrumental in purchasing two new pink Surrey Jeeps in 1962.

I remembered Grant showing me a picture of some Tonka execs, including his dad Russ, with one of the pink Jeeps. Grant recently found a copy of the photo for me, and said it was taken at the Lafayette Country Club in Wayzata, in 1962. A big thank you to Grant for providing the picture.

Note the Tonka Surrey toy just visible on the hood.

The Men From Tonka

In the photo from left to right: 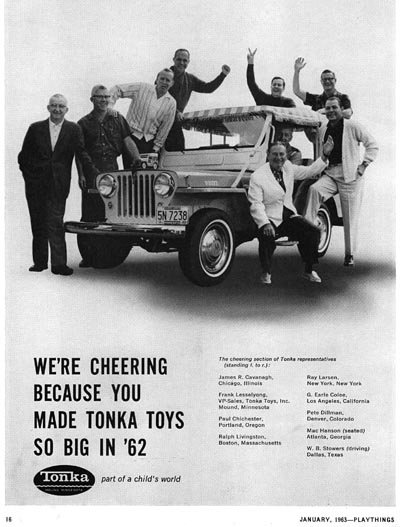 Another picture taken at the same time as the shot of the execs, shows Frank Lesselyong (second from left) now identified as VP Sales, posing with a group of sales representatives from different markets around the U.S.

The photo was used as an ad in the January 1963 issue of Playthings, thanking toy retailers for Tonka's success during the preceding year.

I thought it was pretty interesting to include these details on the men from Tonka here, but now I'll let Bill get back to his story. -- Derek 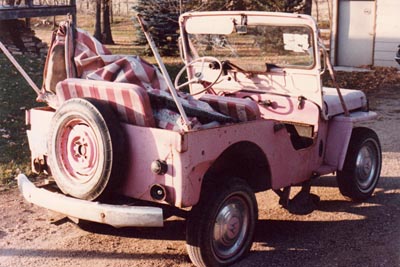 When I received the two Jeeps from Grant Wenkstern in 1982, I was working at Chemtool Inc. in Loretto, Minnesota. The building was once a creamery in the early 1900's and oddly enough in the 1960s was also home to Tonka Toys plastics division. My mother worked for Tonka Toys in the early 60's and she spent her work days in this same old brown brick building with its many wood and metal additions. I remember the rows of large plastic presses and how hot it got in the plant in the summer time. Two shot molding was pretty new back then but Tonka did a nice job of molding the two-tone stripe seats and surrey top that were used on that toy. 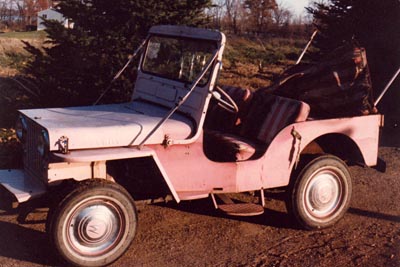 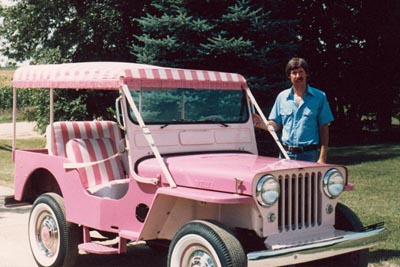 The restoration consumed my spare time for many months and I can remember certain things about the project. Grant took the engine to be rebuilt at a tech school in the area. I painted the wheels early so that Grant could take them and have new wide whitewall tires put on. I did the color match by mixing the primary pink with a light base until the lighter shade matched an un-faded sample from behind the headlight doors. 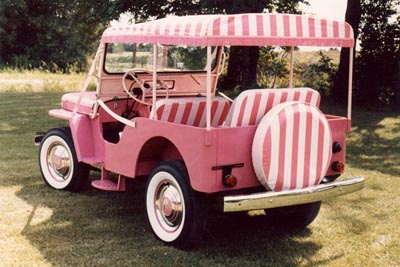 I repaired cracks in the steering wheel on a picnic table while on a long weekend vacation with the family near Motley, Minnesota. It took three tries over several months for SIS upholstery in St. Cloud to dye stripe the seat and top fabric so that it would bond properly. Nowhere was pink fringe available for the top so my wife and I dyed yards of new white fringe in a big bucket of RIT outside on our deck. 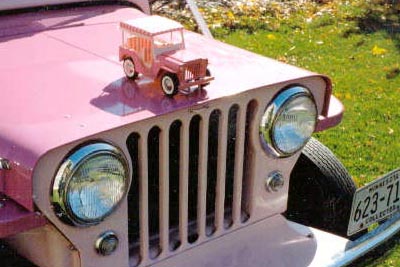 Soon after the Jeep was completed and delivered to Grant I asked him if I could take it to a show. When I went to load it on the truck, I was surprised to see that Grant had drilled a couple of holes in the hood to mount a Tonka Toy Pink Surrey Jeep with a u-bolt from the hardware store. I guess he remembered that's the way Tonka had it in 1962. 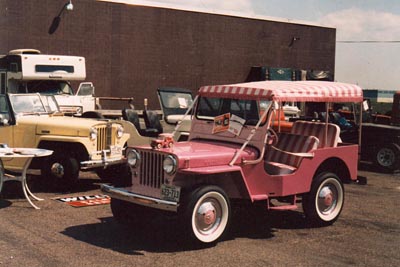 This picture was taken at the Jeep show, at Louie Larson's company Willys Minneapolis, in Lakeville. This would be in the early or mid-1980's. 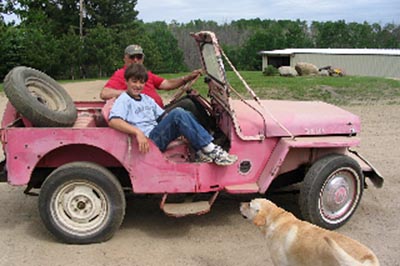 As promised, Grant signed over the title to the "other" Jeep to me. At this point I was totally burned out on the first project so the second Jeep sat in the shop waiting for me to forget the pain of the ordeal. Later I decided to just sell it to Willys Minneapolis. Louie Larson was happy to be the new owner and I knew it would be in good hands. Thanks to Louie for this photo. 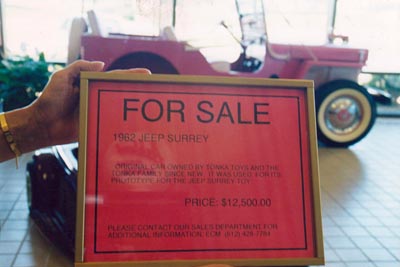 A decade later, after moving to the Seattle area, my wife Laurie and I were visiting family in Minnesota and we heard that Grant's pink Surrey was being displayed for sale in the showroom at Ellington's Car Museum in Rogers, MN. Of course we had to take a look, and sure enough there it was in the main showroom with a $12,500 price tag. 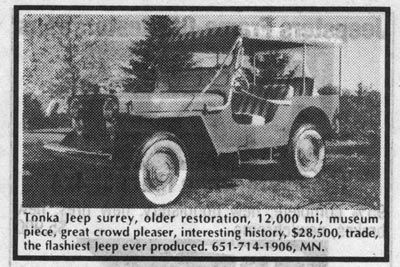 Several months later I spotted that same Jeep listed for sale in the July 1999 Hemmings for twice that amount! As I was writing this story, I called the number on the years old ad. I talked to Mr. Jim Miller who did purchase the Jeep from Grant but sold it some years ago. He said that the Tonka Toy Jeep on the hood had become faded so he replaced it with a new old stock toy from his collection. When I told him I was the one who restored the Jeep he had to bring up the U-bolt drilled through the hood, and I assured him that I wasn't the culprit. 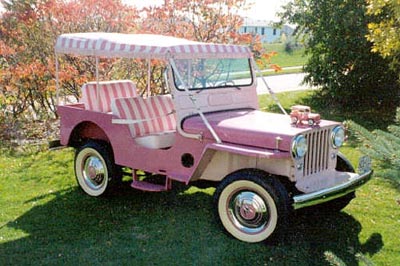 This picture appeared on eBay when 56337 21561 was offered for sale there in 2000. The description read: "Vehicle is in good overall condition. Originally owned by Tonka Toy Co. and the inspiration for the famous Tonka Toy Jeep Surrey, 'the world's most famous Jeep.' This fancy Jeep is a real crowd pleaser. A great addition to any collection or museum! Car is individually owned and titled in Minnesota." 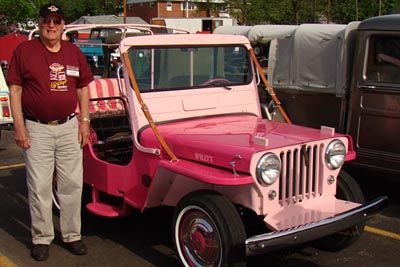 Louie Larson still has the other Surrey 56337 21560, and has shown it at events including this 2009 Midwest Willys Reunion, before the seats were recovered. It has about 12,000 original miles on it, and is now restored to original except for the top. Thanks to Louie for this photo. -- Bill Preston

And thanks to Bill Preston for his story of this interesting pair of Jeeps. -- Derek Redmond

Also on CJ3B.info, see more DJ-3A Surrey Toys and How to Date Your Tonka Flat-Fender.

Return to the Toy Jeeps Pages for more Tonka Jeeps.