Bob Keniston in New Mexico has assembled one of the world's largest collections of all types of toy Jeeps, with approximately 2000 toys filling a whole room of his house. Bob first started buying Jeep toys in the early 1990's, and he says he's been "collecting seriously since about 1998, when Shirley got us a 'puter, and I discovered the four-letter word -- eBay. I'd say my favorites are the Tonkas. Most of the Tonkas run between 15-65 bucks."

Bob has about 200 examples of the beloved Tonka Toy steel Jeeps manufactured in Minnesota from 1962 into the 1980's. 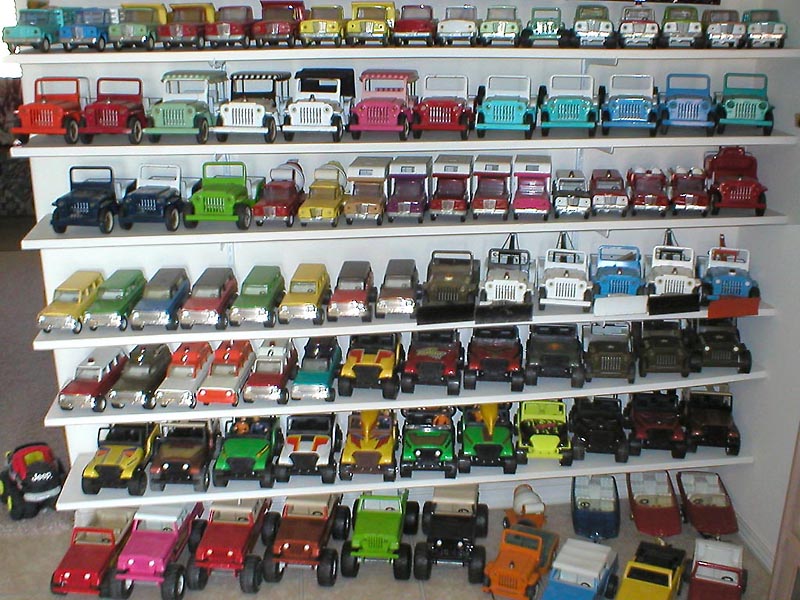 One wall (above) displays a variety of Dispatchers, CJ-5s, Gladiators, Wagoneers and Jeepsters. See also a closer look at some of the Jeepsters plus the complete BF Goodrich T/A Radials set (100K JPEG).He says, "I guess my favorite Tonkas would be the Jeepsters. I've got my eye on a 1973 1:1 -- if the guy will sell it."

Bob says that he and his full-size CJ-5 "Jeep'nCreep'n" (160K JPEG) go 4-wheeling at Moab 6-8 times a year -- "plus Colorado, Arizona, and California (the Rubicon, at least once a year.) I started selling my extra toy Jeeps at the vendors' show at the Easter Jeep Safari 4 years ago. Didn't make a profit -- probably broke even -- but met a lot of new Jeep toy collectors."

This photo shows a lot of the Mini-Tonka flatfenders, and a bunch of the various toys made in even smaller scales by Tonka over the years. See also some Mini-Tonkas with trailers (90K JPEG).

On another shelf are some big Dune Buggies (80K JPEG) and some battery-powered CJ-5s (90K JPEG).

Bob photographed his complete toy Jeep room a couple of years ago -- see a 1500x600 photo (200K JPEG). Most of the Tonkas were on the top shelves in the room before he rearranged things.