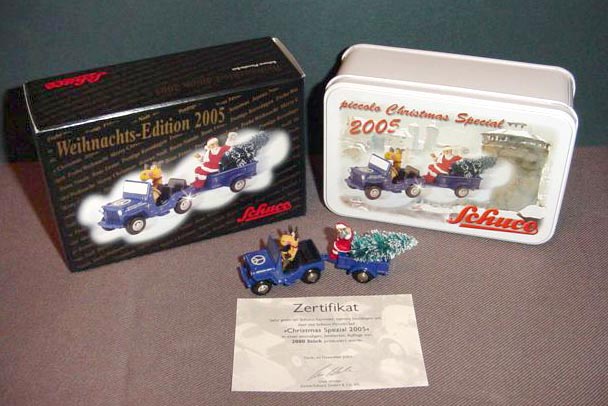 The Christmas 2005 Special Edition of the Schuco Piccolo 1/90-scale Willys Jeep was the second edition of the little toy, which is one of the few examples of a diecast model of the CJ-3B. It was an edition of 2,000 units. 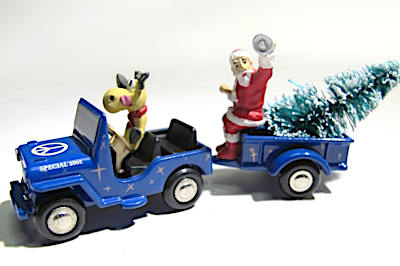 The simple but well-designed 1-1/2" (4 cm) toy is a single, solid casting, with the exception of the steering wheel, axles, wheels and tires. The heavy zamac casting incorporates correct details including 7-slot grille, hood blocks, side steps, taillights and trailer hitch. It runs beautifully on the soft rubber tires. 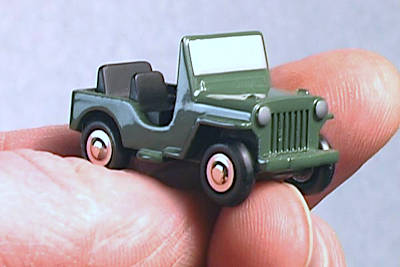 The Schuco Jeep was originally released in the year 2000 in an edition of 4,000.

The hood is tall enough to make it clear that the prototype is the high-hood CJ-3B, although the exact proportions look like they could have been based on early Willys illustrations such as The Vehicle of Ten Thousand Abilities. That was likely CJ-3A artwork revised with a slightly higher hood, but on the actual production CJ-3B the hood was even higher; the bottom of the headlight rings should be higher than the top of the flat fenders. 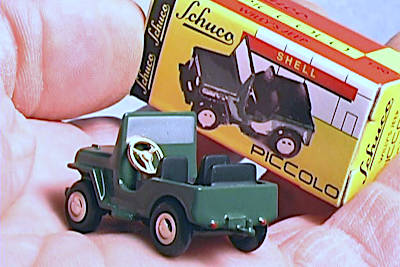 Schuco is a German toy company which originally marketed their tiny "Piccolo" series of mostly European prototypes from 1957-69, and those original models are very much in demand by collectors. The Schuco brand is now owned by the Simba-Dickie Group in Germany, and the Piccolo line was re-launched in 1995 with some reissues of the original models as well as many new vehicles such as the Willys.

The Jeep also came in a U.S.Army version with a matching green Bantam trailer (240K JPEG) but Schuco models in general are not well-known in North America. As of late 2006 the Jeep was still available from dealers online for about US$20. 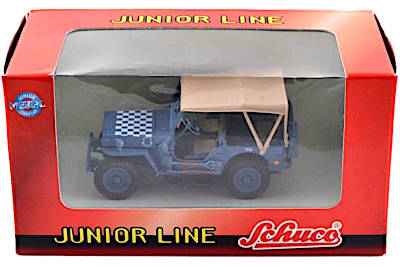 Schuco also markets a number of other, mostly larger series of models, including a detailed 1/43-scale Willys MB produced in Royal Air Force blue and in beige, as well as a U.S.Army version (80K JPEG).


Thanks to Peter Wörthmüller for the Christmas packaging photo. -- Derek Redmond