The "Jungle Jeep" was a 6-volt battery-powered riding toy, manufactured by Eldon Industries in the early 1970's.

Mike Boyink rode a Jungle Jeep as a young boy, and in Battery-Powered Jeep Riding Toys on CJ3B.info he comments, "I think it was too small; by the time a kid is old enough to control something like this they'd be a little big for it." That assessment seems to be confirmed by the picture on the box above. 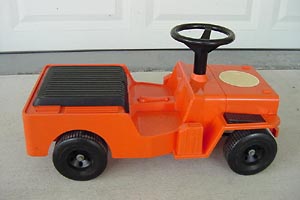 Lionel Wittenberg took the photos seen here of his Jungle Jeep and the original box. He says, "I recently gave it away to my next door neighbor. I used to ride it when I was a kid, about 25 years ago. I believe the battery only lasted a couple of years at the most; it probably wouldn't even hold enough of a charge to keep a digital watch running anymore. I had it stored (in the original box) in my attic for over 20 years." 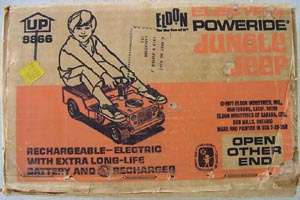 This example is pretty well preserved, and the photos below show most of the details you might need if restoring one of these toys. Click any of the photos for a larger copy (60K JPEG).

Thanks to Lionel Wittenberg, and to Mike Boyink for the bottom view and battery connector photo. -- Derek Redmond