Here are a number of old and new Jeep models you can assemble, by printing the templates and cutting out and glueing together the pieces. Printing on the stiffest paper you can put through your printer is recommended for any of these projects. 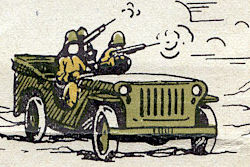 If you want something easier, there's a very simple paper cutout model from 1954 in Tour De France Jeep Toys on CJ3B.info. 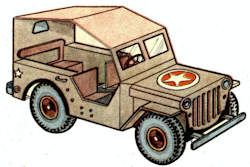 Another vintage Willys paper model has been posted in a few places. I don't know who originally published it, but the pattern is signed "Le Hédan". 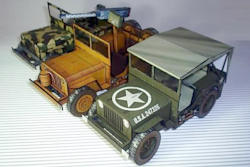 Mauther Papermau in Brazil created this 1944 Willys MB in olive drab with U.S. Army markings (100K JPEG). He did have camouflage and SAS Desert Rats versions, but apparently the plans are no longer available. 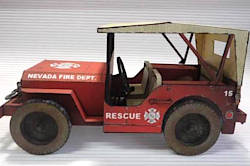 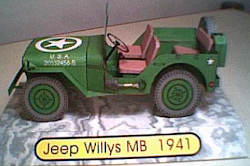 Antonio Mauricio's bright green Willys MB from Spain also has a five-page template. Download it as a PDF (1.2MB). 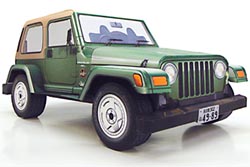 The template for this Mitsubishi CJ-3B was published by 4x4 Magazine in Japan for Christmas 2007. Santa is optional, and you can even use this as a Christmas Ornament. Download the printable template (460K GIF).

Also from Japan is a paper version of the Transformers Hound Jeep (60K GIF). 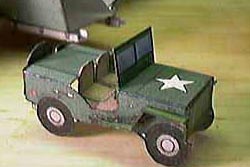 This simple folding paper WWII jeep comes with the Waco Invasion Glider model from Fiddler's Green, who now also have a Rotabuggy flying jeep. This jeep is about 6 inches long. 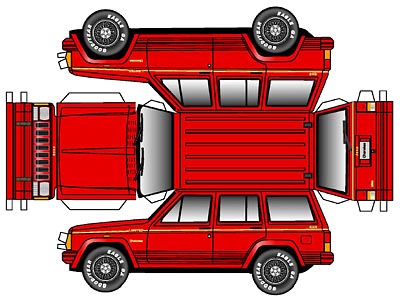 This is one of a number of paper Cherokees that were available in 2009 as PDF files from Masanori Shimozato's website in Japan. Here's a printable JPEG version (160K JPEG.)

AxialRacing.com, who sell RC models, created this paper JKU Wrangler Rubicon, and even have a YouTube video showing how to build it. 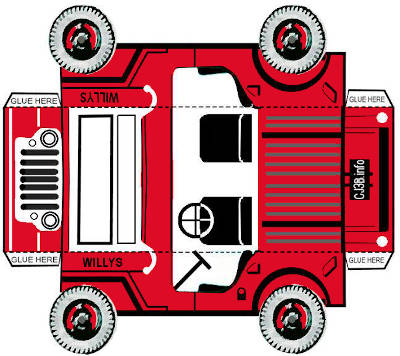 Barry Ogletree found this cutout available on an undated Kelloggs Corn Flakes box (160K JPEG). I initially thought it was a CJ-3B, because of the high hood with WILLYS stamped on the side. But the front grille and the windshield look more like a CJ-2A. I guess a date for the Kelloggs box would help confirm what model it's based on. 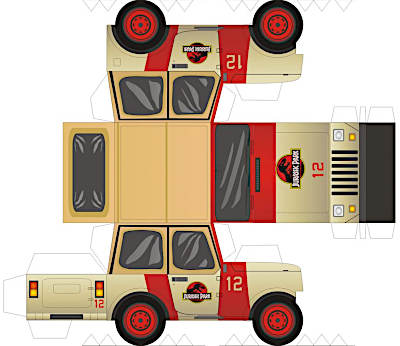 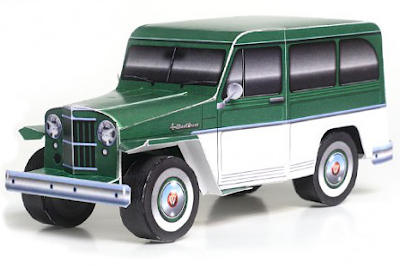 If you're willing to spend a few dollars, PaperCruiser.com has templates for about a dozen beautifully detailed paper Jeeps to choose from, including this Willys Wagon, an FC-150, JKU, M715, XJ and several recent Jeep concept vehicles. And they are available in a variety of colors. 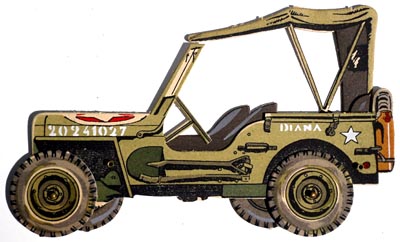 Adam Woodward sold this nicely-preserved item on eBay in 2011, describing it as, "A remarkable and rare jeep cardboard and metal model made in France by Ajusta, circa 1945-46 (the immediate postwar period.) It is comprised of an original box with label containing the parts necessary to make an olive-green American Army jeep model with 3 occupants.

"The jeep itself has been assembled. The original two paper runners (90K JPEG) for the jeep's parts are still in the box, however." 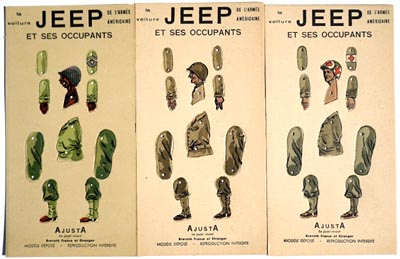 Adam adds, "The three occupants are still in their original runners and are not assembled. At the bottom of the box are the clips and metal rivet attachments (100K JPEG) necessary to finish the model.

"This item was purchased in France, and brought back to the United States by a returning soldier after WWII." 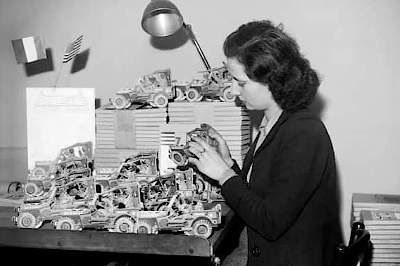 This photo (source unknown) appears to show the assembly of Ajusta kits for sale as completed models, or possibly to promote the book seen in the background. Does anybody recognize the book? The photo reportedly dates from December 1944, and is courtesy Mario R. Maipid. 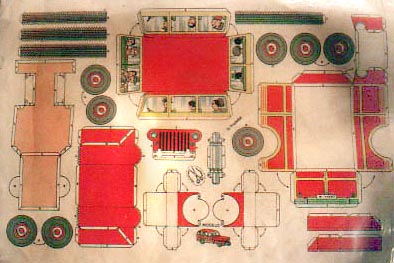 Here's an early version of a red Jeep wagon. Gary Keating has a number of paper and cardboard Jeep models in his collection, including this amazing template for a Willys Station Wagon, which Gary believes originates from South America. It includes the sidewalls and treads necessary to build four 3-dimensional tires. 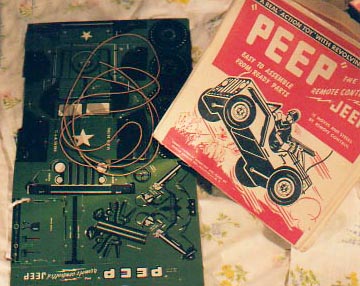 This paper jeep kit in Gary's collection was made in the USA and is notable for its detail, including a driver, "revolving wheels" and mounted machine gun. "Peep the Remote Control Jeep" is also perhaps the first remote control jeep toy ever built; it uses a piece of string for the purpose.

The name "Peep" suggests this is a pretty early toy; the term was widely used during WWII but disappeared rapidly once the "jeep" nickname became standard usage. 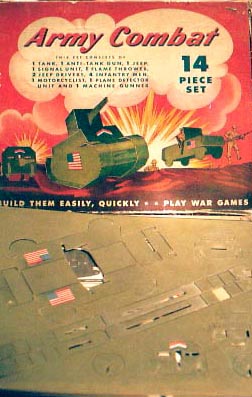 The jeep in this early "Army Combat" set was, as usual, illustrated on the packaging with all four wheels off the ground. But the models in the kit are much more rudimentary than the "Peep" at the top of this page. Most of the 14 pieces in this set are 2-dimensional figures, including two drivers for the jeep.

The assembled cardboard toy below is very similar to the jeep from the "Army Combat" set. 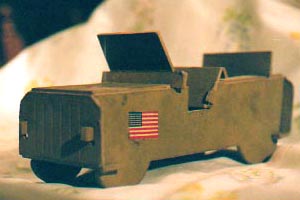 Below is a selection of other paper and cardboard items from Gary Keating's collection. Dates and manufacturers are not identified on most of these early toys, so any further information from packaging or reference sources is welcome. 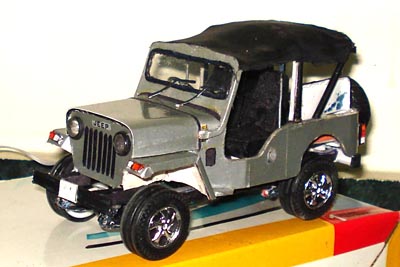 A motorized paper Jeep! Mechanical engineering graduate Anoop Thomas in Kerala, India used his computer drawing skills (40K JPEG) to help him build an accurate 1/32-scale Mahindra CJ500D out of cardboard. But what really makes this model unusual is the electric 4WD drivetrain, with remote control cable. No steering yet though....


Thanks to Gary for the early kit photos. -- Derek Redmond

See also a paper Nellybelle Jeep and plans for a Juice Box Jeep on CJ3B.info.