The original "New Ray" CJ-7, a 1/32 scale diecast, friction-powered 4-wheel-drive toy made in China, has been sold in North America since the mid-1990's. New Ray has also been using the name "Speedy Power", and has released unpowered models based on several Jeep Corp. prototypes and the Sahara Wrangler. A 2001 release is a new version of the CJ-7. 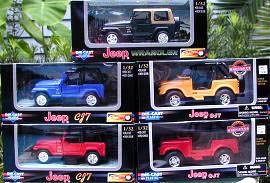 Here are both the new and the old "New Ray" CJ-7s. Note that the packaging is nearly identical. However, the older CJ New Rays (right bottom, right middle) are slightly larger and have the distictive CJ profile, while the new CJ's (left bottom, left middle) have the same profile as the Sahara Wrangler (top). Note the "CJ" decal on the sides of the new New Ray CJ's in the larger version of the photo (120K JPEG)! 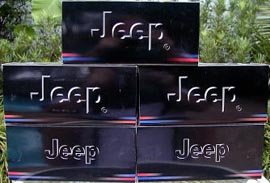 Note also that the back of the boxes are not very different. However, the new New Rays now have the "Registered" JEEP trademark (top three boxes)!

On the shelf, we find that there are repackaged old New Ray CJ's right along with the new New Ray CJ's! Note the Gold Dakar sneaking in on the right of the new CJ stock. 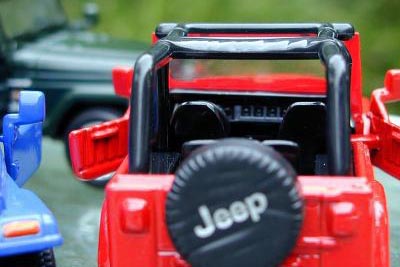 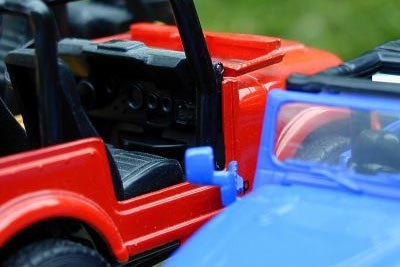 The old New Ray CJ's on the left, the new New Ray CJ's on the right, and the Sahara Wrangler in the back. Notice that there are significant differences in the slatted grilles. Could it be that "TJ" is not licensed to New Ray? See Sahara Toy Jeeps for more New Ray Sahara TJ's. 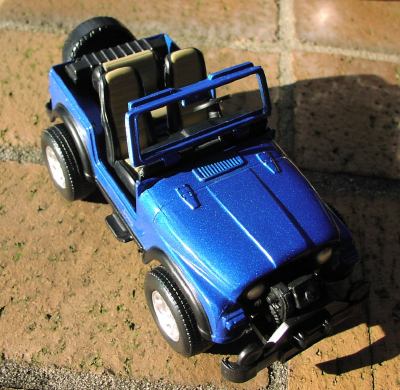 The kit does not include a roll bar or hard top, and has no friction drive. The tires are plastic instead of rubber as on the friction-powered version. The interior is tan in the middle of the seats instead of black. There is just 'Jeep' on the side, and the wheel wells and running board are painted black. 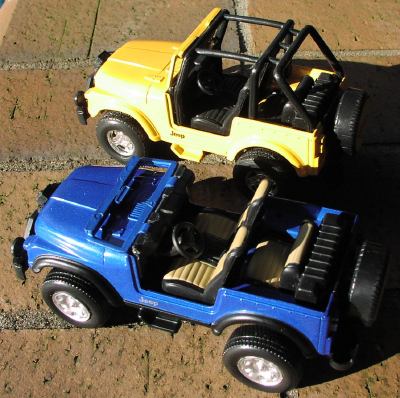 The kit in front, with the older version behind. See also a front view and a rear view of the comparison (60K JPEGs).

Thanks to Mike Albright for putting together this page based on his collection. See also the New Rays MB and an unpowered plastic knockoff of the CJ-7 (30K JPEGs).

P.S. My opinion is: pick up an old New Ray CJ-7 if you run across one. You'll never find a better toy for the money. -- Dakar Redmond