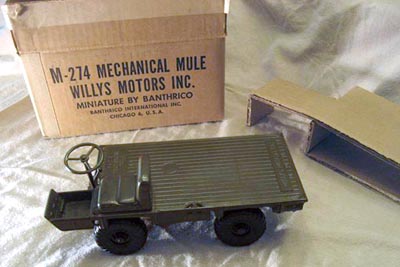 Phil Bragg has identified the manufacturer of this cast aluminum model of the M-274 "Mechanical Mule" as Banthrico, of Chicago. In 2015 Phil wrote to say, "Picked up a pristine M-274, in the box, off eBay this past week. Proof positive on who built them.

"Most folks I've spoken with think this model would have been produced around 1957 as the earlier version of the Mule (early 1950s prototype) had a foot basket that slanted towards the ground.

"There is a seal by Atlantic Container Corporation on the underside of the box, partially covered by brown tape. I was told that seal might have a code that would reflect the date of the box manufacture but it is not visible when it's covered by the tape. This box was made to fit the Mule perfectly. Nice top cover that protects the steering wheel." 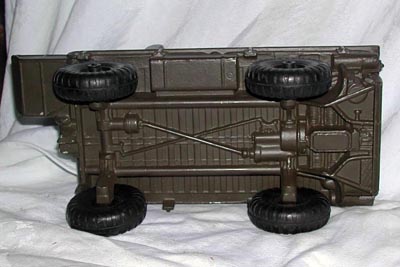 Regarding how many Mules were produced by Banthrico, eBay seller luke12099 told me in 2020, "A friend of mine named Jim Stutter of Bremerton WA once worked for Banthrico when he lived in Chicago. My friend is long gone now but said that he painted car banks for Banthrico in the mid to late 1950s. He told me that the Mules were a very limited production run, two to four hundred."

They are certainly less common than some Banthrico models such as the Jeep CJ-5 (see Jeep Dealership Promotional Models on CJ3B.info.) They are also more detailed than the other Banthrico models, including a fully detailed underside.


Al-Toy collector Colin Peabody had speculated in 2012 that Banthrico was the source of the Mule: "The M-274 wasn't built by Willys until the mid-50's, when Toledo Casting and their associate names were supposedly no longer in business. I am thinking that the model was made by either Authenticast or Banthrico, even though it's the same scale as the Al-Toy Jeeps. Al-Toy always made their tires with their name on them, and the M-274 model doesn't have that trademark.

"One of the reasons I think the model was done by either Banthrico or Authenticast (Comet) is that Comet did a lot of military identification models for the troops, although most of them were smaller than the Mule or the Al-Toys. The last diecast models, of the Surrey and of a Willys wagon, were done by Banthrico around 1960-61."

Robert Woolley added, "Did you know how Banthrico got its name? They made tabletop cast banks for banking industry promotions. Banthrico is from: Bank Thrift Company."

Few examples of the Banthrico M-274 model have surfaced, so it took some time for its origins to be identified. Apparently produced for Willys Motors, perhaps as a promotional item, it carries no marks identifying the manufacturer. It was suggested that it might be one of the Al-Toy Aluminum Toy Jeeps produced for Willys by Toledo Casting in the 1940's, which would have made it the rarest of them. The large (approx. 1/11-scale) model does have some similarities to the Al-Toys, and Willys and the Army were testing the M-274 in the late 1940's, although the Mule was not put into full production for the U.S. military until 1956. 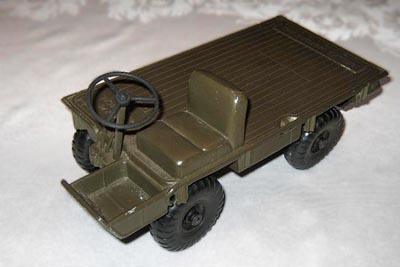 Phil Bragg wrote to CJ3B.info in 2008: "I have been doing some research on this diecast M-274 Mechanical Mule. Just this week I acquired another one of these diecasts, and there are about 13 publicly known to exist. I have taken or shown mine at military vehicle shows and though they generate great interest no one knows anything about them. Many of us are afraid that the history of this model will fade away as most have come from estate sales." 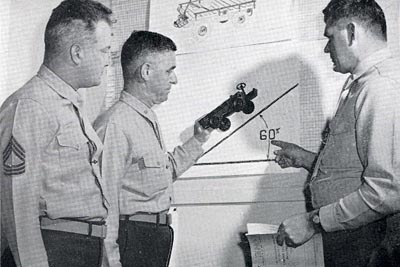 "I have located this one photo in a July 1958 issue of the US Marine Corps Leatherneck magazine (50K JPEG) and have spoken with an M-274 Mule parts dealer who relayed to me an account of a person who told him of only 12 of these made for Willys.

Although perhaps best known for its use by the Marines, the M-274 was first purchased in 1948 by the US Army to test as a cargo carrier, and was also used by the Navy and Air Force (see Marine Mule.) It evolved from a vehicle designed at the end of World War II by Willys-Overland as a medical evacuation litter carrier. There were 11,240 Mules produced between their introduction and 1970, when production ceased (see Wikipedia.) 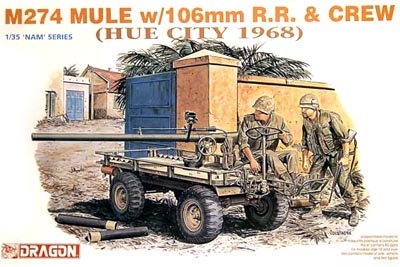 The Mule was used as a platform for various weapons, and for carrying men, supplies and ammunition during the Vietnam War and into the 1980s. Rated for a load of 1,000 pounds, it was the first vehicle able to carry more than its own weight. There have been several plastic model kits of the M-274, including this 1/35-scale kit from Dragon Models which includes a 106mm recoilless rifle, a weapon vital to the Marines' strategy in the 1968 Battle of Hué.

All M-274 versions were equipped with full time four-wheel-drive, and earlier models were four-wheel-steer. The steering wheel could be adjusted to several positions, which allowed driving from a sitting, walking, kneeling or lying position. The only suspension was provided by the wide, low-pressure tires.

The engine was located under the platform at the rear, protected by a steel cage. The early models built by Willys were equipped with a 4-cylinder, air-cooled engine, which was replaced in versions built by other suppliers with an air-cooled 2-cylinder horizontally-opposed Continental Hercules engine (see Mule History.) 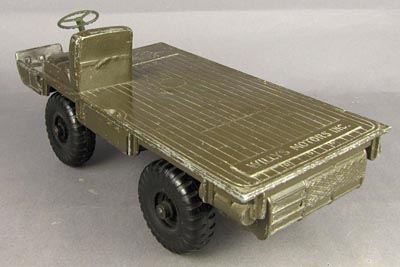 Robert Wooley sent photos in 2011 of another of the diecast Mule models found in good condition. See also a right side view (60K JPEG).

The labels "M274 Mechanical Mule" and "Willys Motors Inc." can be clearly seen in the photos, but there are no markings on the tires, as would normally be found on Al-Toys. 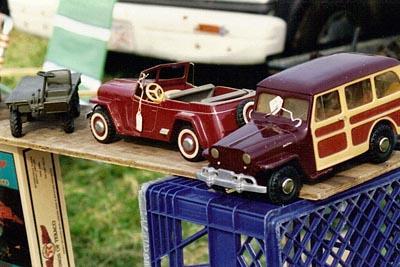 Glenn Byron sent a photo of a Mule at the Hershey show in 1993, on a vendor's table alongside an Al-Toy Jeepster and Station Wagon. Glenn says, "I found no evidence of Al-Toy being involved with this toy and was not at all impressed with it for the price, as the man wanted just as much for the Mule as he did for the Jeepster and Station Wagon. Those little tags all said $1200.

"I do not doubt the Mule's rarity, as in all my travels I have only seen this one and one on eBay a few years ago. It is a very unique toy and I'm sure a very historical piece, just not a part of Al-Toy lore." 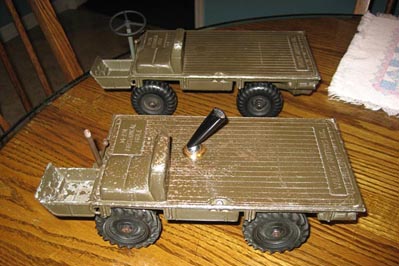 Phil Bragg mentioned, "Many of us who have been scratching our heads over this believe it was built as a sales tool, not a toy. Hence the detail of the undercarriage and its use in the Leatherneck magazine.

"In Willys News, January 1958, an article entitled 'Mule Draws Big Crowds In Shows Across Country' states, 'One of the most exciting vehicles among the hundreds of 1958 models exhibited at the Chicago Auto Show proved to be the Army's new M-274 Weapons Carrier, popularly known as the Mechanical Mule.' The article also mentions, 'Millions of other people have also seen the Mule on television, as it appeared in commercials on the Maverick show recently.'

"There appear to be at least two different sets of tires used -- tractor-style (foreground in the photo) and military NDT (background.) Even the Leatherneck article mentions possible uses by farmers, ranchers and outdoorsmen; this shows that Willys may have had a civilian application in mind with the Mule. Did they make the diecast models for this market?" 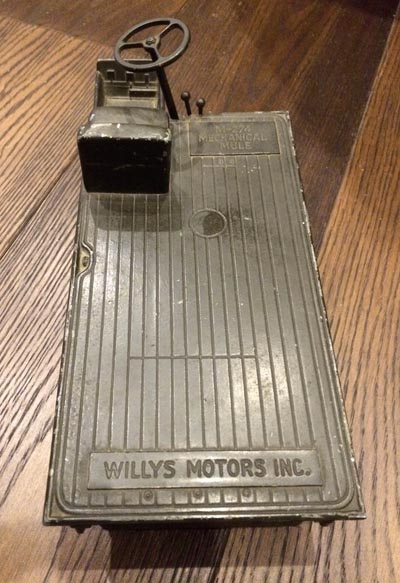 Ed Hingelberg wrote in early 2017 to say he also had a Mule. "I just rediscovered the Mule going through my inventory of 'stuff'. It is in very good condition with the original steering wheel and stem. I'm 61 and it has been in the family as long as I can remember.

"My father worked at a manufacturing plant in Marysville, Michigan. They made some kind of parts for the old Jeeps. This goes back to the 50's and I remember him bringing one home, and me being so excited to have him take me off road and using the windshield wipers with a manual mechanism that worked by hand. I believe he would have brought the Mule model home from work. I remember it from the early 60's.

"The plant and company is long gone and I couldn't find any history on it, being a rather small operation. My dad would be 101 if he were still alive and his co-workers would have been in the same range." 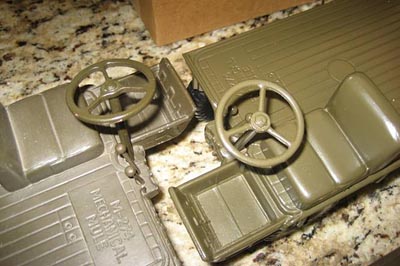 Phil Bragg added Ed's model to his collection, and reported, "The steering wheel (on the left in the photo) that came with this Mule is slightly different than the Mule I purchased in the original box. It is slightly larger in diameter at 1.668 as opposed to 1.59 and is slightly thicker top to bottom at .122 as opposed to .1 (if I measured them correctly.) Note: this steering wheel has been moved to a nearly pristine model that was missing the column and wheel.

"The column looks to be the perfect length and diameter with splines on both ends. Overall this steering wheel looks to be more robust and could withstand handling better than the other one. Additionally, this one reacts quite strongly with a magnet whereas there is no reaction with the other which is probably why they are almost always found broken or missing. For the times I have looked for a replacement steering wheel I have never come across anything so close to this one. Now wondering if Banthrico received complaints with the original fragile steering wheel and made a more durable replacement. 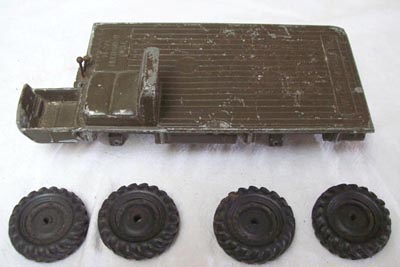 In 2011 Phil had found another Mule: "Front of foot basket and a rear corner of the deck were bent. Wheels were separated from body, and the usual missing steering wheel and steering column. The wheels are the tractor style, not the non-directional tires usually found.

"Using a C-clamp I was able to straighten the dents, applying pressure with the screw handle. This worked reasonably well with this soft metal. Tiny cracks did form on the inside of the bend in the metal. Applied Super Glue to these cracks to prevent any further movement. This seems to work. I have an extra steering wheel and getting a piece of plastic or metal rod for a steering column will not be any problem. Discovered that a standard roofing tack pin happens to be the same diameter for the wheel hub and its disc is almost identical to the disc on the other Mules with the exception of a small protrusion in the center of the original.

"Being that this Mule model had been damaged and its paint quite rough, I decided to paint this unit. While cleaning the deck of old paint I discovered that one of the screws holding the rear engine cage piece was somewhat loose. Whoever made the promotional models used a self-tapping screw that can only be screwed in and not removed. With a little work I was able to remove both screws and remove this engine cage piece. What I was hoping to find was a casting mark on the inside of this cage piece. Unfortunately there is nothing there."

We would be interested in hearing about any other examples of the Banthrico Mule. Thanks to Phil Bragg, Colin Peabody, Glenn Byron, Ed Hingelberg and Robert Wooley for their contributions. -- Derek Redmond

See the story of the Al-Toy Aluminum Toy Jeeps on CJ3B.info.