The "Meccano" construction system was patented by Frank Hornby in the U.K. in 1901 under the name "Mechanics Made Easy," and he changed the name to Meccano in 1908. His company continued to produce the sets of plates, girders, gears and wheels until 1981, along with a range of toys including Hornby Trains and Dinky Toys (introduced just a few years before Hornby's death in 1936.) For a few years, there was a Meccano factory in the U.S., but Gilbert Toy Company's "Erector" sets captured much of the American market.

Painted Meccano debuted in 1927 with a red and green color scheme, changed to blue and gold for the domestic U.K. market for 1934-41. Postwar production began in 1945 with a return to red and green. The financial fortunes of Meccano declined until, in 1964, Lines Brothers (Triang Toys) bought the Meccano name. Another color change was introduced by the new management: yellow, black and zinc plating. Black was replaced by blue for the 1970's, and U.K. production ceased by 1981. Around 1990, Meccano France purchased the rights to the "Erector" trademark in the U.S. and started selling Meccano sets marked "Erector Meccano." The Meccano name was bought in 2000 by Nikko of Japan.

There is now a large international community of Meccano modellers building models often much more complex than those built by British schoolboys in Meccano's first century. 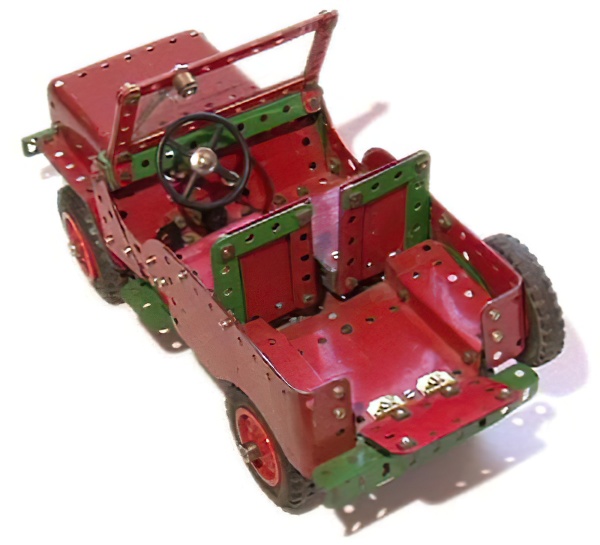 This powered Jeep model was built by the late Don Redmond. It features details including clutch and brake pedals, transmission shifter, windshield wiper, opening tailgate, and side-mounted spare. The steering wheel is an unusually realistic Meccano part. (I also used one of these in my conversion of a Tonka Jeep into a U.N. Peacekeeping M38A1.)

This model is about the same size as a Tonka, at 11-1/2" (29cm) long. It is powered by a wind-up Meccano clockwork motor under the hood, connected by a driveshaft to the rear axle (two-wheel drive only.) 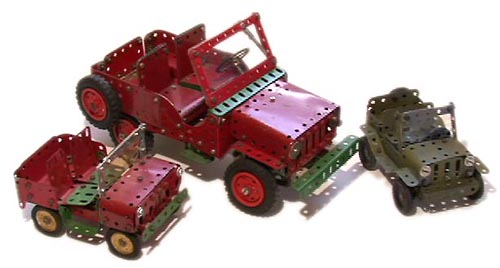 Here the big clockwork Jeep poses with a couple of simpler, freewheeling models, each about 6" (15cm) long. They demonstrate the variety of ways that the huge range of standard Meccano parts can be combined to model a given prototype. 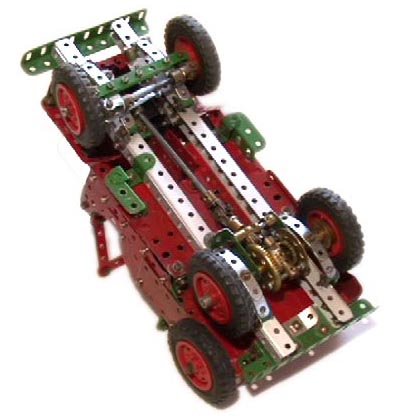 The view of the larger model from below shows some of the hidden prototypical features including C-channel frame, leaf spring suspension, brake drums, side steps, and fully functional steering and rear differential (50K JPEG). 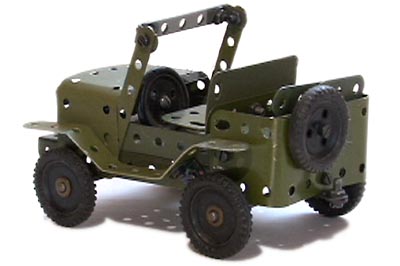 The little Jeep built in 2006 with olive drab parts from a Meccano military set, illustrates a different approach to modelling. (See a front view, 40K JPEG.) That is, capturing the essence of a prototype as simply as possible. Although it includes seats, steering wheel, headlights and front marker lights, spare tire and trailer hitch, there are only 37 parts used, not counting nuts and bolts. Contrast this with larger models built by Don, such as a 24" (60cm) foam fire truck (120K JPEG). 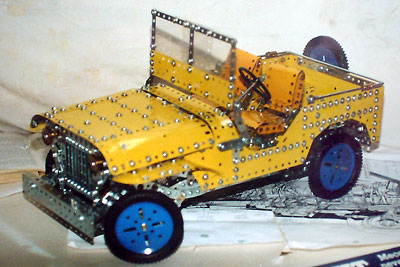 Or with this large, detailed model of a 1942 slat-grille jeep, completed in 1991 by Daniel Cassidy, and exhibited at the North Eastern Meccano Society annual exhibition in Darlington, UK. It featured four-wheel drive and was built using 1970's yellow/blue/zinc Meccano. 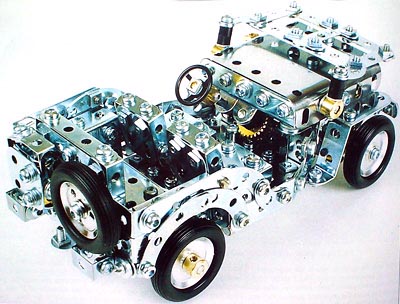 A 1/18 scale model (7-1/2" long) built by Bernard Périer in France was detailed in a September 1999 article in the excellent Constructor Quarterly magazine. The model consisted mainly of 1970's girders and flat strips which were zinc plated, so for consistency the plates used for the hood and floor were stripped and polished to match. The article 1943 Jeep with trailer and driver (240K JPEG) includes additional photos showing the underside. 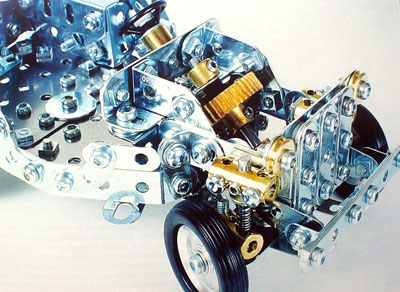 The steering of Périer's model was geared low to make it easy to push and steer with a finger. The suspension utilized coil springs. A tin man driver and Bantam trailer (130K JPEG) were included in the project. 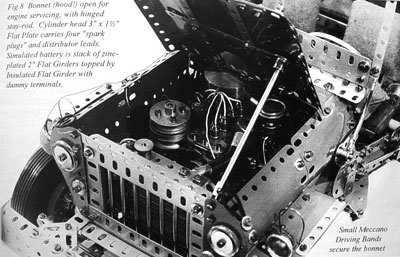 A March 1995 article (200K JPEG) in Constructor Quarterly, written by Bert Love, was headlined "U.S.A. World War II Willys Jeep: A 'proportionately appropriate' detailed Meccano model." What may be the most detailed, accurate Meccano Jeep model ever built was powered by a DC motor through a transmission and hi/low transfer case to two- or four-wheel drive. 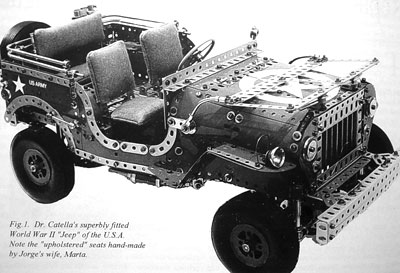 This remarkable model on an 18-1/2" (47cm) frame was created by Jorge Catella of Argentina. It also had functioning brakes, and used Marklin universal joints.

Thanks to the authors of the Constructor Quarterly articles. -- Derek Redmond