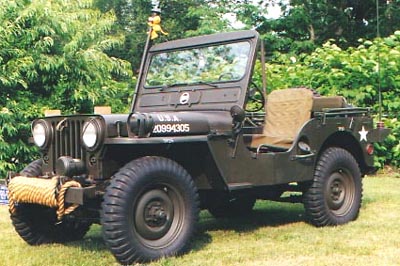 I have been restoring Jeep vehicles and collecting Jeep memorabilia for over 20 years. I have restored several CJ-5s, and currently own a fully restored 1953 M38 (see also a rear view photo, 20K JPEG), a 1954 M170, 1949 CJ-3A and 1957 CJ-3B. I have a large collection of Jeep literature and manuals, and a collection of Jeep toys spanning from the early 40's to current collectibles. These facts have brought me to this story on M38 Jeep collectibles. Mainly, where are they?

I have a few postcards, some magazine ads, and some published pictures and such, but I have only six toys based on the M38 military Jeep. The plastic model kit producers, tin toy makers, and diecast makers have done other Jeep models to death, such as the MB, early CJ's (both flat and round fenders), Jeepster Commandos, station wagons, FC's and pickups, but no M38's. If an M38A1 can be represented, along with the Mule, why not the M38?

Here are the six M38-based toys in my collection: 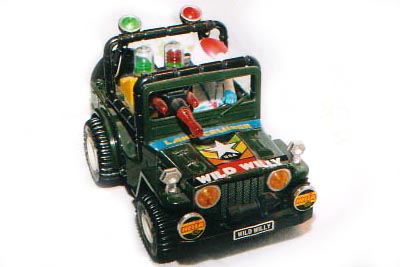 This battery-operated, 1/10-scale bump and go action Jeep was made by Cheng Shing Toys out of Taiwan. It's made of plastic. I'm not sure of the years it was produced, but it may be from the late 60's early 70's, or even later. The green and red lights on the roll bar and the yellow, red and green lights on the back end of the Jeep flash as it moves, and the front-mounted gun flashes red also. Add the yellow blinking headlights and this makes for one rather bright and flashy toy! In other words it looks ugly! Then there is the siren sound that constantly wails.

The M38 features include the windshield with three raised areas under the glass, side pockets for the top bows along with footman loops along the side for the side curtain. There are reflectors on each rear corner also. There are even raised bolts where the bow storage brackets are bolted to the side, as well as where the spare tire mount would be located if on the side. The rear of the Jeep has a spare tire and a gas can. On both sides there is a bracket where the shovel blade would be mounted also. This toy's driver (see a left side photo, 20K JPEG) bears a close resemblance to the driver of the Tamiya Wild Willy (below), as does the whole vehicle, right down to the winch in the front and the "Wild Willy" decals. But it lacks the detail and sophistication noted on the Tamiya vehicles. I have no idea why the "Land Cruiser" decal is included. It runs on three C batteries. 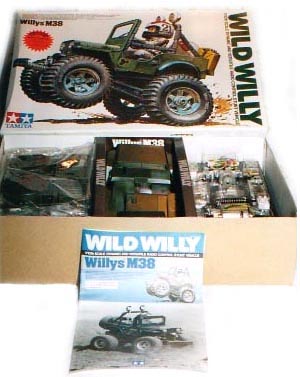 Most everyone knows the Tamiya 1/10-scale "Wild Willy" Jeep. It's radio controlled, and has variable speeds forward and one reverse, and full steering control. It's almost impossible to control at its top speed, as it's made to do wheelies for long distances and thus steering control is lost. At slow speeds its easily managed, and it can do its fair share of climbing and obstacle running. To just let it take off and go is a lot of fun to watch! This Jeep toy is truly "like a bat out of hell!" Due to its size, the body has details like a correct gauge panel and glove box. A gas can is mounted on the back as well as an M38 Decal on the spare tire.

The photo on the right is a complete unbuilt kit still in the box. The box art is absolutely wonderful! Note the M38 reference on the box top. I have also included a picture of a complete spare body kit (20K JPEG) for the Wild Willy, which contains the body parts, driver, decals, and hardware. 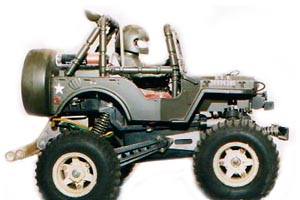 The Wild Willy on the left has a body I modified to look like my M38, with the same hood numbers, tp markings, and stars. I also added headlight guards and lighted headlamps. See a front view photo with an unmodified kit (20K JPEG). Too much time on my hands when I did this, I guess! May enter it in a military show just to see what happens!

Tamiya came out with a remake of this vehicle several years ago that was stated to be an improved and updated version. They spoiled it by making the grille with horizontal openings not unlike the M151, thus ruining the M38 appearance. Probably copyright laws prevented the famous Jeep grill from being used. I don't know if an original grille can be substituted on the new version without much trouble. The original "Wild Willy" is still the one coveted by the true collector. 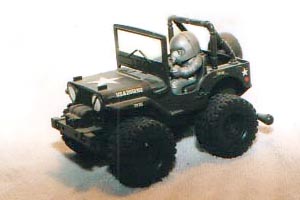 There is a 1/32-scale version of the Wild Willy, also made by Tamiya: the "Wild Willy Jr." It's made of plastic, is battery powered, and has true four-wheel-drive, but no steering control. It does a great job climbing over anything reasonable.

It has a lot of M38 features, such as the headlight guards, gas tank filler guard, bow brackets, front tow hooks, correct windshield, reflectors and footman loops, shovel and axe body creases on passenger side, auxiliary power unit on right fender, along with the hood plate for the fording tube. Also, the correct blackout lights front and rear are on the Jeep. There is a detailed tailgate on the rear along with a spare tire, but no gas can carrier (though there are four raised marks where it would be mounted!). The cowl battery box cover is present also. The windshield folds down, as it should. Decals are included such as hood number, stars, and tp markings. Overall, it's a great representation of the M38 in a small scale. It takes two AA batteries. 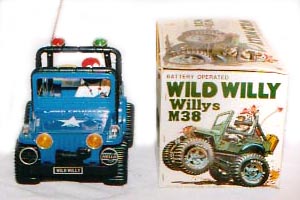 This is a colorful version of the Jeep made by Cheng Shing in Taiwan. The body is basically the same as the one described at the top of this page, minus the gun. Same M38 features. It's 1/10 scale, made of plastic, and has bump-and-go action. When activated, the Jeep moves around while the red and green lights on the roll bar blink, the yellow headlights flash, and the red light at the tip of the antenna flashes. There is a wailing siren sound also. The box art looks very similar to Tamiya's Wild Willy art. Note the M38 title on the box also. Nice Jeep and a little less obnoxious than its sister above! Takes 3 C batteries. 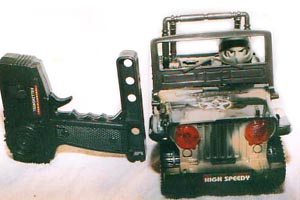 Here's a 5-function, battery operated remote control plastic toy made by Randa out of China. Its called the "Turbo Powered Cross-Country Jeep." It's eight inches long and needs six AA batteries and two 9-volt batteries to operate. This Jeep has many M38 features such as the headlight guards, gas filler guard, bow brackets, footman loops, reflectors, detailed tailgate and indents for shovel and axe (see a left side photo, 20K JPEG). Also the auxiliary power unit on right fender, correct windshield that folds, grill hinges, front tow hooks, and cowl battery box cover. The box art has nice colored drawings of M38 Jeeps. Not the detail found on the Tamiya 1/10 version, but still this toy is an accurate representation. No date on the box, but it has to be fairly new. 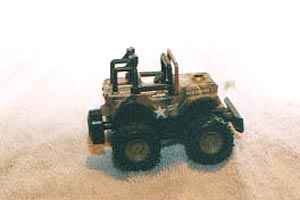 The last M38 collectible I have is a three-inch-long cigarette lighter, made in Japan. It has a camo paint scheme, rolling wheels, and has several M38 features, such as the headlight guards and tailgate. Due to its small size detail isn't possible but it's definitely an M38. It has "WILLIS JEEP" decals on the hood, sides and front bumper, and a star on the hood. Hood numbers are also there. You fill the lighter from the back under the tailgate, and push in the spare tire to light the flame. The flame comes out of the hole in the hood. Again, this small item has close ties to the Tamiya "Wild Willy" such as the full roll cage, and even has the NOS tank next to the driver's seat; it's conceivable that Willy was its inspiration.

I have several tin Jeeps that have headlight guards, but they are double bars, so I won't include them here. They are more likely based on Mitsubishi versions of the Jeep. Monogram makes a small "Winch Stunt Buggy" model that snaps together, and has pull-back motor action and power winch. Again, the box art shows double headlight guards, so I won't include it in the M38 class. If anyone has other M38 toys or memorabilia, feel free to add them to this list.

Thanks to Gary for the list and the photos. -- Derek Redmond