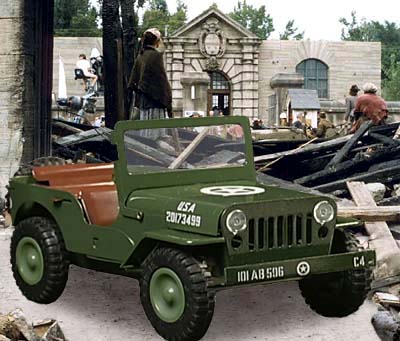 We recently saw the introduction of inexpensive diecast models of three as-yet-unreleased Jeep prototypes -- the Dakar and the Icon from Speedy Power, and the Jeepster from Hot Wheels.

As the year 2000 begins, we're also seeing an increased interest by collectors in models from the other end of the Jeep timeline, those rare early toys and ID models manufactured during and just after World War II. And on the Internet we've seen an explosion in the number of Jeep toys being offered on auction websites. All of these things point to a very healthy level of interest in both serious and casual collecting of toy Jeeps, as we enter the year 2000.

No doubt this interest is partly due to the larger phenomenon of the growth in popularity of collecting toys of all kinds. It's a hobby that allows us to relive our simpler, younger days, while maintaining the fiction that our time and money is being invested in something that will grow in financial value.

But toy Jeep collecting also benefits from the fact that, like a fire buff collecting toy fire engines, or someone who sews collecting thimbles, the hobby often grows out of an interest in the real thing. The level of knowledge and committment necessary to make a hobby satisfying in the long term, is perhaps more likely to be present, than it would be for a collector of more ephemeral toys. There has perhaps been a toy Jeep collector or two who eventually graduated to owning a 1:1 Jeep, but there are certainly many more who started as Jeep owners and gradually became interested in the toys depicting their prototype.

In addition to auction sites, the Internet has offered increased contact between Jeep toy collectors who previously may have only suspected that there were other people out there who shared the same interest. If you haven't made that contact yet, try out the jeeptoys e-mail list.

The photo at the top of this page shows a stamped steel, friction-drive toy made by Gonio of Czechoslovakia, approx. 1/20 scale. It's pictured at the Montreal location for the TV movie "Nuremberg", set at the end of World War II. The background photo is by Guy Malette, who with his brother provided and drove an MB and a GPW (40K JPEG) for the filming. Guy is a military Jeep enthusiast, and is also one of probably not too many North Americans who have the Gonio MB in their toy collections. (See a larger copy of the photo, 55K JPEG.)