Early Jeep Toys Made in France 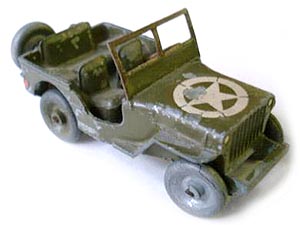 When you think of French toys, Dinky Toys is not usually the first manufacturer to come to mind, but in fact they were one of the first off the mark with a toy jeep in France following World War II in 1946. Their military diecast with metal wheels was given several civilian paint schemes in 1948.

The variety and quality of jeep toys produced immediately after the war in France is remarkable. In addition to the cast metal Dinky Toys, there were several companies making tinplate toys.

The wide range of tinplate included a number of fire service jeeps. The 1/43-scale example below, produced by Polichinelle in 1946, has wooden wheels and is driven by a wind-up motor. According to an article called Jeep: les modèles français (140K JPEG) in the April 2000 issue of the French newspaper La Vie du Jouet ("Play Life"), it came originally with two firefighter figures ("les pompiers"). 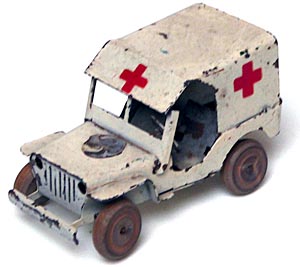 Jeeps released by Polichinelle between 1946 and 48 included several military and ambulance versions. This ambulance is in the collection of J-F Lavie. See also a rear view (100K JPEG). 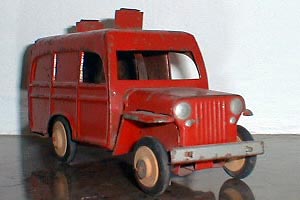 A series of larger, 1/18 scale tinplate Jeeps, produced from 1946 to 1949, carry the mark "J.R.D." They also are motorized, and include station wagons as well as Universal Jeeps. This fire service wagon from J-F Lavie's collection came originally in a set with 4 figures.

See a JRD station wagon (20K JPEG) showing the socket on the left side for the key to wind up the motor. 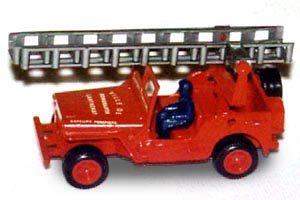 How about a fire Jeep with an aerial ladder? Here's an interesting 1965 toy photographed by J-C Guerry. Made by Safir Champion, this "Sapeurs Pompiers" (fire department) version was one in their series of 1/43 jeeps based on an earlier casting first produced by France Jouets (F.J.) in 1961. The lettering on the hood reads "Ville de Romorantin-Lanthenay."

Other Safir Champion Jeeps included USAF Military Police, Free French Forces, US Rangers, rocket launcher, ambulance, and "Protection Civil" (civil defense). The Safir Champion catalogue apparently also included a version with Israeli army markings, and one with a Soviet red star, although these may not have actually been produced.

This Joyax tinplate fire Jeep with clockwork motor dates from about 1950, according to the article in La Vie du Jouet. Total length is 260mm (about 10 in.), and again les pompiers are included.

See also the left side with box (220K JPEG) showing the windup key, and the illustration on the other side of the box (180K JPEG). 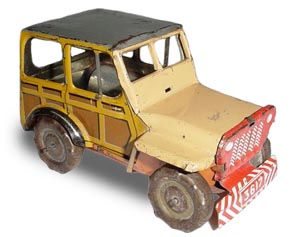 This 1950 station wagon is from Joyax, who also issued the fire engine above. It's approximately 1/35 scale. The grille and bumper on this example owned by Peter Woerthmueller look as if they may have been donated by a Joyax wrecker ("dépanneuse"). See also a rear view photo (40K JPEG).

Another example owned by J-F Lavie has an all-red front end, and smooth metal tires. See a front view and a rear view (30K JPEGs.) 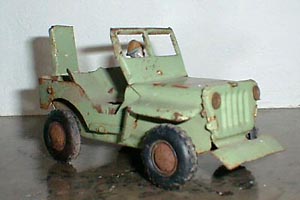 Here's the basic Universal Jeep from Joyax. This one appears to have originally been a wrecker -- it has the remnants of the tin boom in the rear.


One more brand name appearing on tinplate Jeeps in the early 1950s was C.R., who had an extensive catalogue including a number of fire Jeeps. They may have been the only French tinplate with lithography approaching the detail of some of the Japanese toys. See a photo from La Vie du Jouet of two 1/20-scale C.R. Jeeps (20K JPEG).

According to the six-page article in La Vie du Jouet, some 120 varieties of toy Jeeps were produced in France between 1946 and 1987. See their production list of Toutes les versions (300K JPEG), organized by scale and manufacturer. It does not include toys with no manufacturer's label. 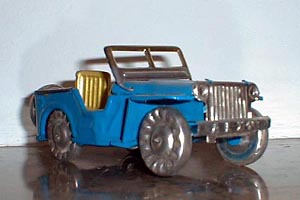 This one, from J-F Lavie's collection, looks similar in style to much of the French tinplate, but a 2006 note from Bryn Freeman suggests Portuguese origin: "The blue tinplate one is the same as one I picked up brand new in Portugal about 5 years ago. There were lots in a gift shop and I understood that they were being produced somewhere in the north of Portugal for the souvenir trade, but using old patterns."

The longest continuous line of toy Jeeps in France, from 1965 to the present, comes from Majorette. See Majorette Small Diecast Jeeps and Majorette Large Diecast Jeeps for photos.