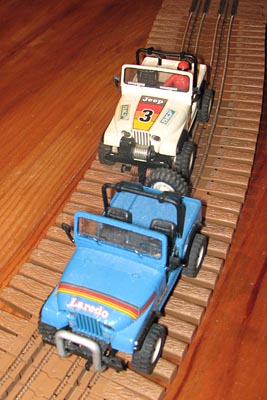 The Spanish toy company Exin obtained in 1965 the rights to build under licence specific slot models from the Scalextric brand of England. Exin built slot cars until 1993/94, when they declared bankruptcy and were bought by the American toy giant Tyco. Tyco made slot cars under the brand SCX until they were bought by Mattel, who were not interested in slot cars and ended the line.

In 1985 Exin introduced a wonderful original idea in slot cars -- the Scalextric STS (Super Traction System) (120K JPEG) in Spain. It was an off-road racing set with four-wheel-drive vehicles in 1/43 scale, and a variety of off-road tracks (100K JPEG). 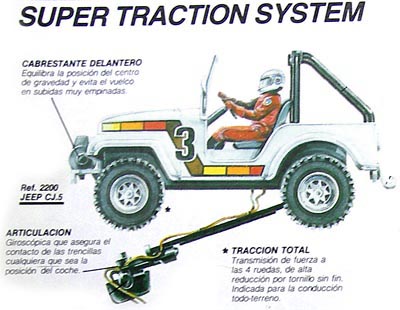 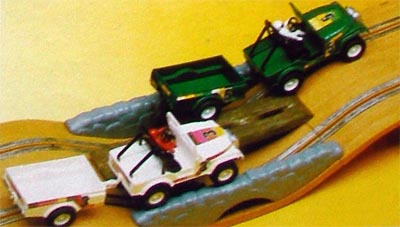 The cars had a mobile front arm containing the guide that allowed them to climb over obstacles in their path. The system included special tracks with obstacles, gradients, suspension bridges, flexible tracks, etc. 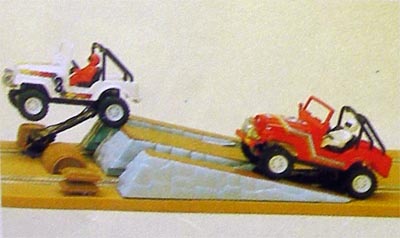 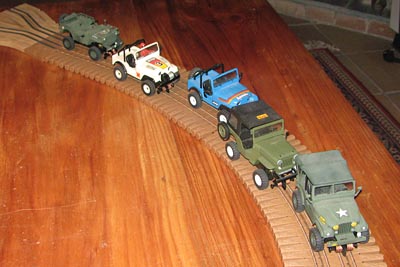 The STS was in the Exin catalogue for four years before disappearing. It didn't catch on in the slot-racing market, which preferred fast cars at full speed rather than Jeeps climbing obstacles.

But for Jeep fans, the STS must be among the best Jeep toys ever manufactured. Three custom modified models (90K JPEG) built by me include an M38A1, Willys MB, and CJ-3B.

The M38A1 is an STS CJ-5 painted military green and with military decals. The Willys MB is a 1/43 scale plastic kit built, painted and fit on an STS chassis. 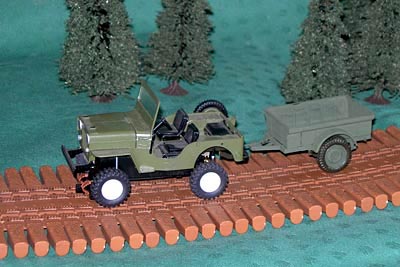 The CJ-3B is a modified version of the MB kit, with the hood, grille, windscreen and dashboard hand-made. It is also fitted onto a standard STS chassis. -- Josep Bordas

Thanks to Josep for the photos and story of Exin, and for making the unique CJ-3B slot Jeep! -- Derek Redmond