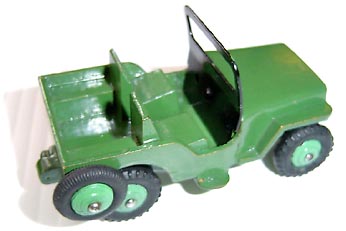 At first glance the toy seen here appears to be a nice but somewhat played-with example of the Dinky Toys number 25Y Universal Jeep, made in the U.K. starting in 1952.

In fact, this is a unique piece of Dinky Toys history, and certainly one of the rarest toy Jeeps in existence. It's one of more than a dozen handmade wood Dinky Toys prototypes, which went up for auction at Bonham's in England in November 2004.

The model is all wood with the exception of the wheels, and the windscreen which is cut from sheet metal. See also a left side view (30K JPEG). 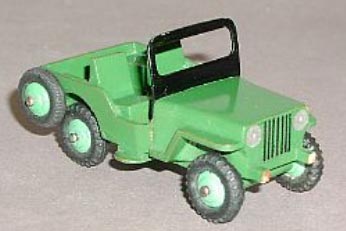 What is most astounding about this prototype is that it is closely based on a Jeep with a tall bonnet -- the high-hood CJ-3B (40K JPEG). It's clearly different from the diecast 25Y production model (20K JPEG) which was a quite accurate representation of the older, low-hood CJ-3A (although the diecast version does retain the black windshield of a CJ-3B.)

The wooden model is listed as a prototype for the 25Y, and if it does indeed predate the diecast which was advertised for sale in Meccano Magazine in August 1952, there seems to be only one likely explanation. It was created in early 1952, based on an advance look at the Willys CJ-3B which appeared in America in the summer of that year. But when the 25Y was approved for production and detailed measurements were needed to create the final mold, the only full-size Universal Jeep available for measuring in the U.K. was a CJ-3A. 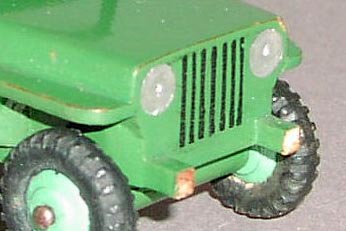 The front bumper is missing, and a close look reveals that the tall CJ-3B grille is drawn on the model, and the headlights are silver paint. The rear power take-off is included, as on the diecast version, but other changes in the final production CJ-3A include the design of the spare wheel, and the addition of a steering wheel and trailer hitch (30K JPEG.)

Other Dinky Toys prototypes in the auction included the military Austin Champ (40K JPEG,) a short-lived competitor of the Jeep and Land Rover which was used by the British Army. 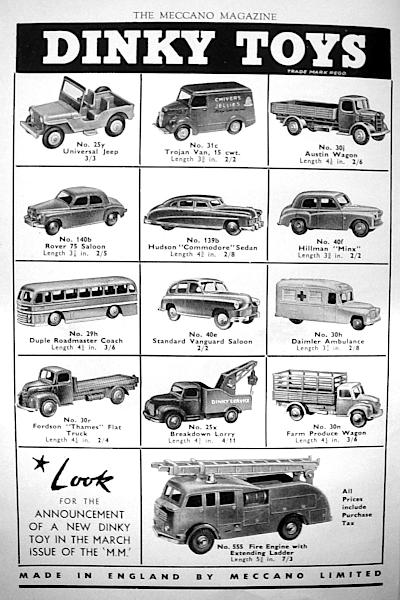 An advertisement from Meccano Magazine, February 1954, shows the Universal Jeep along with other Dinky Toys of the period, mostly based on British vehicles. The 25Y is one of the more expensive items in the ad, presumably because of the number of detail parts included. It was part of the Dinky Toys line from 1952 until 1967 (after 1954 as number 405). The most common colors were red and green (a slightly darker green than on the prototype) and it was also produced in blue and yellow. The dies were later sold to Nicky Toys who manufactured it in the early 1970's in India.

Thanks to seller Chris Wade for supplying information on this unique item. -- Derek Redmond