Dinky Toys are the blue chips of the model car collecting hobby. Unlike the "limited editions" of today's collector cars, Dinky Toys were true toys, issued to be used and abused with little consideration for future re-sale value. The downside of attempting to collect Dinky Toy Jeeps in original condition (with their boxes no less) is the steep price they command. Filling holes in a collection with rough examples is very common practice, and with Dinky Toys, the wide availability of almost all spare parts makes this fun while adding a repair aspect to the hobby. It is hard to keep a Jeep owner from fixing their Jeep (toy)! 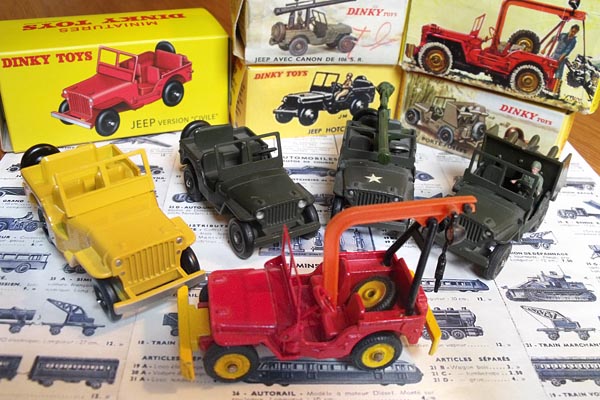 But what if you could add to your collection a brand new Jeep, complete with a box and fresh paint: modern reissue of old castings! Not exactly the original, but close enough to stand-in on the display shelf. Enter Atlas Editions in 2014 with a line of French Dinky Jeeps made using original dies under license to Mattel (owner of the Dinky Toys brand).

Can you tell which are the originals in this "complete" collection of French Dinky Toy Jeeps? 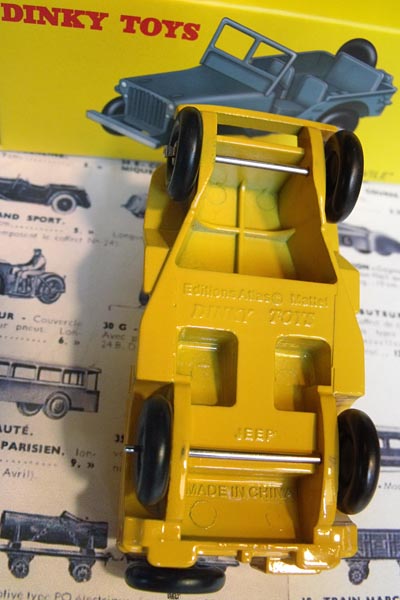 In fact, the collection above includes a yellow reissued Atlas 24M (70K JPEG) at the back left. The back row continues with original French Dinkys 80B, 829 and 828, and the 1412 tow truck out front is also an original.

It was quite fitting that Willys MB Jeeps were the first new models that Dinky Toys released after the war, both in Britain and France. The yellow French Dinky Toy #24M (90K JPEG) seems to be the hardest Dinky Jeep to locate, in any condition. The 1:43-scale model is slightly larger than the rest of the French Jeeps, and featured solid wheels with no rubber tyres.

Given the opportunity to purchase a reissue for less than $12 shipped from China, I jumped at the opportunity to "complete" my collection. As seen in this photo, the model is identified on the base as "Editions Atlas © Mattel, Made in China" so it is a legitimate reissue rather than a knock-off. 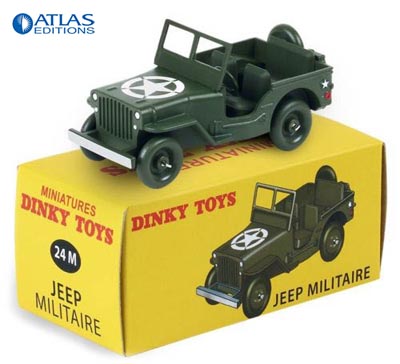 The Atlas 24M is also available as a reissue (right) of the green Jeep Militaire version of Dinky Toy #24M (50K JPEG).

Atlas Editions has been producing various diecasts for years, including two 1:43 Tintin-themed Jeeps. The Dinky re-casts however, are being marketed in a rather old-fashioned manner, where one buys into a subscription and a new model is shipped monthly. Of course eBay offers the option to buy from re-sellers, but also it appears that the China factory source may be selling these direct to consumers at a discount. 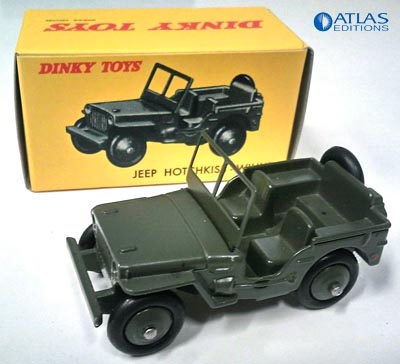 The more common of the French Dinky Toys is the slightly smaller 80B "flat-hood" casting, in 1:50 scale. Similar to the British "domed-hood" Dinky Toy #153A (60K JPEG), the model was initially available with solid upright windshield, which is the version reproduced by Atlas. 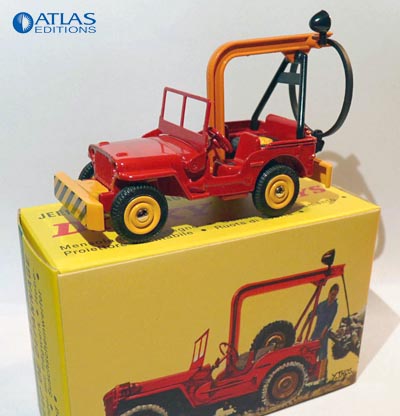 Nothing recent here, but there have been some previous reissues.

This early Nicky Toys reissue dates back to 1963, when some original British Dinky dies were sold to a company in India, which literally pasted the name "Nicky" over "Dinky" and tried to commercialize on the popularity of the newly out-of-production Dinkys. This 1:43-scale Jeep, based on the Universal Jeep Dinky Toy #405 (90K JPEG) is unfortunately quite crude, with cheap wheels. 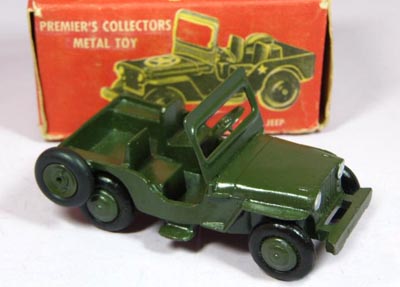 I'm uncertain if the Premier's Collectors toys, made in Japan in the 1980s, used the original dies or are just a very good copy of the classic British Dinky 405.

For collectors of Dinky Toys, both of these reissues are a novelty, just like the new Atlas Editions of the French Dinky Jeeps are sure to remain.

Thanks to Jarek for updating us on the Dinky Toys story. -- Derek Redmond