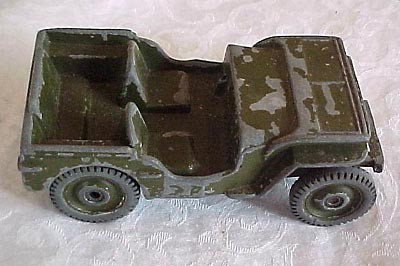 Like many Dales out there, mine was in sad shape when I got it. It had no spare or steering wheel and the paint was pretty bad. You would expect that something in this condition would be a steal price-wise but not so! These babies are HOT, and a mint one was outside my price range. 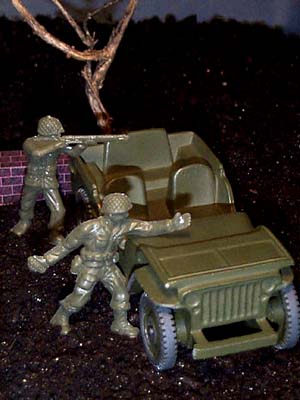 First thing to do was to fix up the paint. Matching 50-year-old leaded green paint is not that easy, but I found a pretty good match in Testors 1165 Flat Olive Green. This color is slightly lighter in shade but it looks good. After stripping off the old paint, I painted mine to look sort of slighly worn as I did not want to remove the original paint from the base or the wheels.

So the jeep was now painted and ready for some new parts. I thought of making my own spares, but through some ID model collectors I found a source for spare wheels and steering wheels! 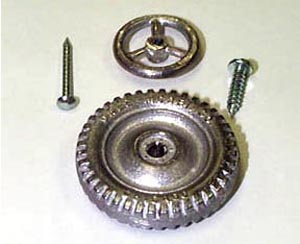 The picture above shows the spare with the "DALE - MODEL CO." text. The text on the spare could very easily be removed using 180-grit sandpaper, and the spare be used as a replacement for a wheel. 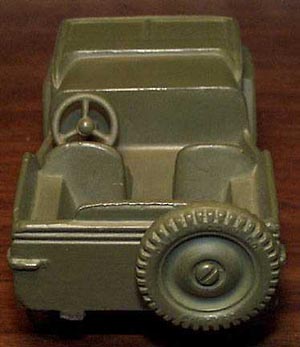 I painted and assembled my like-new Dale for a fraction of the cost of a new one. And this particular Dale can now also be seen on the big screen at Walt Disney's "California" theme park in California. The movie is called "Golden Dreams" and has a soldier coming home after WWII to find his son playing with the Dale he sent back from the Post Exchange.

Thanks to Jarek for describing the project. See also his article on World War II Jeep Recognition Models -- Derek Redmond