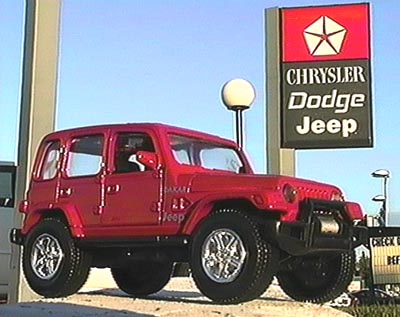 Did you see the Jeep Dakar at your local dealer? Well, unfortunately you never did and never will, but at least the toy version of this Chrysler concept vehicle was available in some toy stores in 1999. This nice 1/32 diecast was made in China by "Speedy Power" (owned by Toymark Company Ltd.). Jarek Skonieczny found this red one for me, and I photographed it at Kingston Dodge Jeep Eagle. 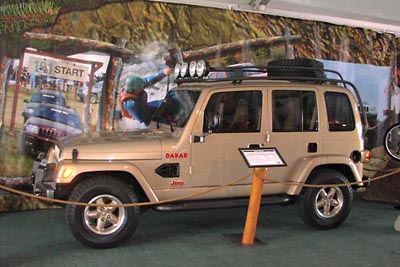 The toy Dakar was discount-priced (under $10 Canadian) and was also available in a gold paint (20K JPEG) similar to that seen on the concept vehicle exhibited by Chrysler in auto shows. Mike Albright took these photos at a "Jeep 101" event in 2003.

Elements of the 1997 prototype Dakar eventually saw production in the form of the Jeep Liberty and the TJ Wrangler Unlimited, but the Dakar's unique combination of comfort, convenience and offroad ability was never put on the market. 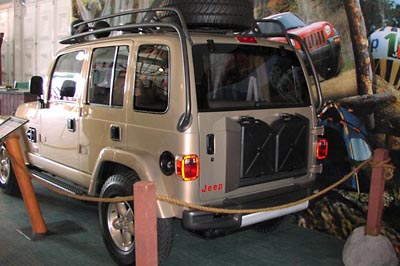 A real Dakar was apparently spotted in early 2000 on its way by air freight to Abu Dhabi in the United Arab Emirates. Maybe this means that if you have enough money you can buy one?

Incidentally, the choice of the Dakar name seems a bit odd since there were two 4x4's already called Dakar -- a package available on the Mitsubishi Montero, and a kit car sold in Britain for use on a Range Rover chassis. Seems a bit sloppy of Chrysler to choose that name, but right in the tradition of using the "Wrangler" name, previously copyrighted in Canada by GM. (I guess we have to blame that choice on AMC, not Chrysler.) -- Derek Redmond