These are toys no more

I know of no other website that deals so thoroughly with Jeep Toys as this one, CJ3B.info, does. So it stands to reason that all jeep toys that are somehow worthy of mention should find a niche on this page. That is why I come to write about the Cararama series of die-cast jeep toys.

Once again the word "toys" seems rarely applicable when one looks at some of these products. Having two small grandsons whose parents are financially able to shower them with all kinds of expensive toys, I am able to compare two worlds. The one world is the one I myself come from, where, as a boy, you barely had the funds from your own allowance to purchase a single Dinky Toy. In most households, an amount of one pound (Ł1 sterling, at a time when South Africa was still a Union under British control) was too high a price for a young boy's Christmas present. A sorely needed pair of shoes would have cost the same, but you don't give a boy shoes for Christmas! The other world now belongs to my grandsons. It is an era where a cell phone affords much more enjoyment to a child than the nicest of die-cast car models, and where a nine-year-old is able to instruct his grandfather how to properly access all the phone's functions! 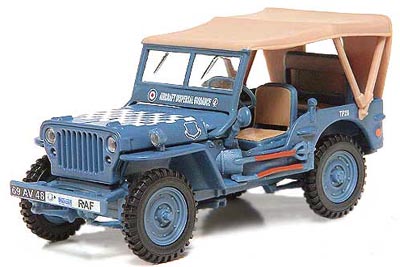 The relatively new Cararama series of die-cast toys, specifically the World War II jeep, today plays a larger role in my own life as a jeep aficionado than in the lives of my grandsons. I leave their lack of enthusiasm for the jeep range of toys to their parents to consider, and concentrate on this remarkable product, which has been hitting our outlets for a few years now.

Those hardened Dinky Toy collectors who know the 1:43 scale Cararama range of die-cast models will undoubtedly shrug their shoulders and remark on these products not being in the same league at all with Dinky. Not comparable, they might say, and not fair to even try. I suppose if one bears in mind that the makers of today's die-casts have access to technology that Meccano never even dreamed of, then what Meccano achieved around the time of World War II with what was available, deserves the highest appreciation. Recall that Dinky Toy 153A was a very exact jeep model for its time.

I will not dwell on modern techniques of die-casting in comparison to the old, but rather leave that topic for someone else to investigate and report on.

In 1997 more than 100 acres of land was acquired at Dongguan City, just inland from Hong Kong, and a modern factory complex built. There the firm of Hongwell Toys, a private Chinese corporation registered in Hong Kong, manufactures the Cararama range of die-cast scale models of popular vehicles, in both 1:43 and 1:72 scales.

All the models feature die-cast body construction. They have windscreen wipers, plastic light fixings, door-mounted rear view mirrors, rear de-misting elements and high-density brake lights where applicable. They even have registration plate numbers, manufacturer's badge or model markings, and manufacturer's type wheels. At a price of only about ten dollars apiece for the 1:43 scale Cararama models in the USA around December 2005, they were excellent value for money. In South Africa even today, they can be purchased new for about R60 to R85 apiece, which is equivalent to about $8 to $11.

Now the 1:43 scale World War II Willys jeep is the only model dealt with in this article, and any comparison to Dinky or other makers' models is freely made (without a conscience, so to speak) irrespective of whether it is fair or not.


Comparison with other models

In this article it's all about the faithful reproduction of the World War II jeep by Hongwell. No other manufacturer known to me seems able to rival the jeeps of the Cararama range in this price bracket. 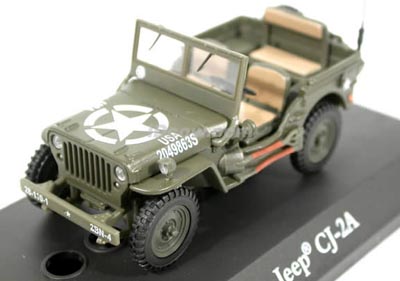 The Cararama jeep models truly excel. They stand up remarkably well to very close scrutiny of the features and detail as found on the actual full-size Willys MB and Ford GPW jeeps. The range of Cararama Willys jeep models that I have come across in my city are the olive drab version (one with the top up and one with it down), the blue Royal Air Force model with the top down, the suede (tan) colored version with the top up, and a Desert version with an unattractive kind of blotchy camouflage. These models each come in a display box, mounted on a plastic base that reads JEEP CJ-2A, which is a horrendous misrepresentation of the actual contents. As we all know, the CJ-2A is just not the same animal as the MB or GPW.

To compare the Cararama jeep with other die-cast models in 1:43 scale, I looked searchingly at the British Dinky Toys no. 153A, the Willys Jeep by Corgi, the Ultra Jeep Willys 1945 by Matchbox, and the Edison jeep made in China. I also bought a model which the words on the box proclaimed to be a Schuco, but lo! Inside there was a Cararama jeep, without a shadow of doubt.

I don't compare the models aspect by aspect as that would stretch the article unnecessarily. Where another manufacturer's model is not mentioned, it means the Cararama is superior. 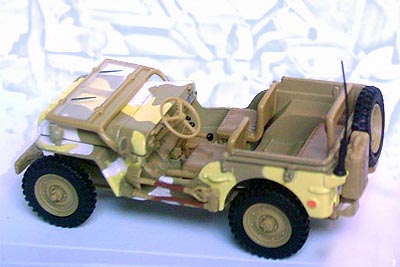 The Cararama jeep tyres have the proper military non-directional tread pattern often poorly represented in other models. The front wheel hubs are different to the rear hubs, as in the real jeep. Although all the manufacturers in this comparison had the tread pattern well enough executed, only Cararama had the different hubs, complete with all nuts on both the hub and rim.

Some models in the Cararama jeep range have a "canvas" top (canopy) fitted. The top is finely represented in plastic and is beautifully detailed. The two top bows are slender as they should be. Just below, on both sides, are the grab handles and small white star. At the front are found the hood clamps (fasteners) and large invasion star. Some models have the top down, and on these the windshield can be folded down on to the hood. Even the colored seat covers are patterned. The gearshift lever is present, as is the two shorter transfer case levers. Only the Matchbox Ultra has these levers equally well represented.

The dashboard shows the correct number of gauges, as well as the three data plates on the extreme right. The steering wheel has three slender spokes, as it should. The wiper blades are visible on the clear plastic windows.

The front of the model shows the correct number of radiator slats (nine), the sunken headlamps with patterned lenses, and, just underneath, the front blackout marker lights. On the left mudguard (from the driver's vantage point) is the blackout driving light with cowl, and rear view mirror. 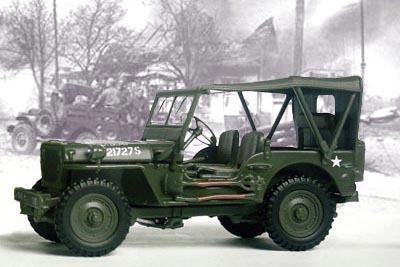 The USA numbers on both sides of the hood can be clearly seen, as well as the unit number on the front and rear bumpers. The "pioneer tools" (spade and axe) are properly mounted with securing straps easily visible. The axe and spade handles are painted brown, simulating varnished wood. The flexible radio aerial is present, as well as the side-mounted reflectors. In the version with the top down, the bows lie flat along the tub sides.

The underside is more finely detailed than any I have compared it with. Visible is the sump of the engine, the leaf springs, the drive shafts leading from the transfer case, the exhaust pipe and baffler, and the skid plate.

Common to all the models compared, the Jerry can has a strap securing it to the body. At the rear, the red stoplights and rear blackout lights are present and well executed.


I am not a Hongwell employee

In case someone should think that I have some kind of invested interest in Hongwell because I wax so lyrical in my praise of these models, let me dispell any such fears. In fact I do detect a flaw. This is a feature found on the real jeep that is glaringly absent in the die-cast model -- the trailer hitch. Strangely enough, I find that the hitch is also absent in the Matchbox Ultra. I cannot think why this feature is omitted. If it were not for the hitch, the Cararama model could be regarded as an otherwise virtually faultless small-scale die-cast replica of the real thing. 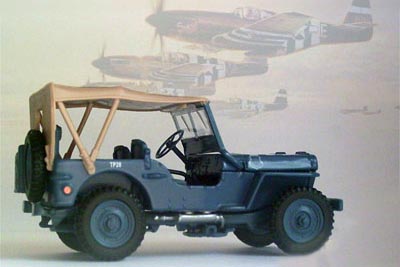 Readers wanting to slam me for putting the Cararama jeeps on too high a pedestal, might say, "Where is the opening hood, the finely detailed engine, the detachable top, the wheels that steer?" I might add to that, "Where is the horn that sounds, the lights that glow, the driver that sings Yankee Doodle?" I suppose one should expect some of these first-mentioned details to appear on a die-cast jeep model made to a scale of at least 1:18, or a plastic kit, for that matter. But then it would not be die-cast, and not 1:43.

But I would be pleased if someone could show me another die-cast model on the same scale having, for example, the correct four fasteners: two for fastening the hood, and two for fastening the windscreen when folded down. The Cararama has these, might I add to its credit. That's pretty good going!

When my grandsons come over to visit, I don't hide my die-cast jeeps anymore. They don't play with them anyway. -- Johan van Zyl


Thanks to Johan for this review. -- Derek Redmond