Jason Caniglia sent this photo of some of his collection in 1997, including a Tonka in near-mint condition which he thinks is about 30 years old.

You might notice Jason has a Rat Patrol book beside his Jeeps. Back in the sixties I got the Rat Patrol model kit for Christmas. Unfortunately I eventually lost all the pieces, but I've still got the box (120K JPEG). -- Derek

In the background is the glossy Olive Drab Tonka with removable plastic soft top. 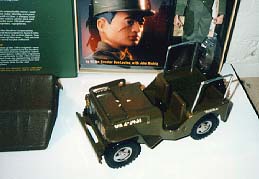 Jason says, "The front windshield folds down and the plastic soft top can be removed. The tires are rubber with silver hubcaps. There is a white star on the hood and the number GR2-2431 on either side. My first thought when I saw it, was that it might be the G.I. Joe Jeep. However, I realized that it is slightly smaller. I used to have one when I was a kid and I pulled out an old photograph to check. I wish I still had that one!"