Model made in Japan from downed U.S. aircraft? 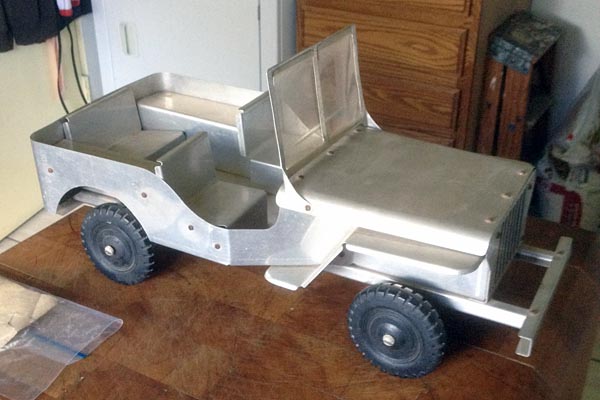 Steve Olguin purchased this big (17-inch or 430mm) aluminum Jeep in 2018. I would have assumed was a homemade one-of-a-kind project, except that Glenn Byron had spotted an incomplete but almost identical model sold on eBay 12 years ago.

So my second thought was that this was possibly a kit, consisting of pieces of sheet aluminum, with small nuts and bolts for assembly. 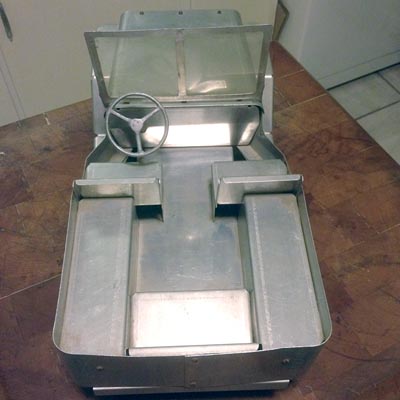 Steve told me, "The Jeep is 17 inches long and is made of aircraft aluminum. I collect vintage toy Jeeps and have many Marx pressed steel Jeeps. The construction is exactly like the Marx and Wood Commodities Jeeps."

He went on, "So I am wondering if this Jeep in a long shot could be the prototype to these toys. Do you know when the first Marx pressed steel Jeeps were made, and also the Wood Commodities Jeeps? The earliest ad I have seen with the Marx Jeeps in it is 1947."

No, I don't know exactly when those American-made toys first appeared, but I think that differences in details, and the larger size of this model, make it unlikely that it is directly related to the Marx or the Wood. 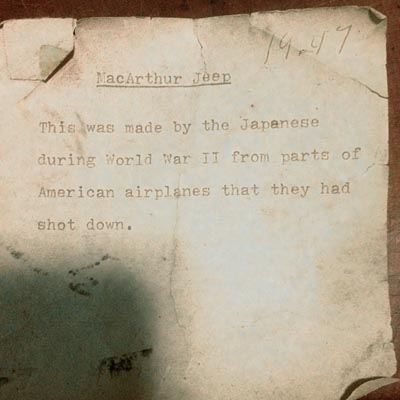 Steve also sent a photo of this typed note which came with the Jeep. He says, "My Jeep was brought home from the war by a friend of the father of the son I bought it from. The note has been with it for all these years, saying the Jeep was made by the Japanese during World War II from parts of American airplanes they had shot down. The note calls it a MacArthur Jeep and a date of 1947 is written on it."

Well, two details in this note raise questions for me. First, Japanese authorities during the war wanted aluminum for the military, so I doubt they would allow civilians to strip parts from downed aircraft. Second, the term "MacArthur Jeep" is how the Willys MB and Ford GPW are referred to in the Philippines, which suggests the model or at least the note may have originated there. 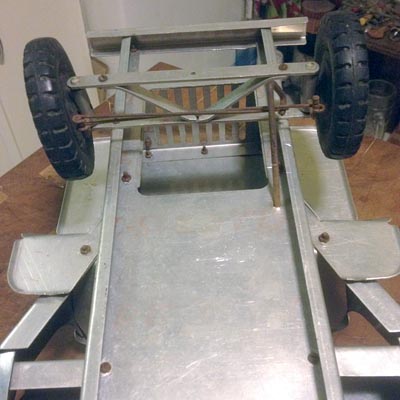 The base shows faintly stamped red ink lettering on the aluminum sheet, which Steve's research indicated could date from the 1940s. 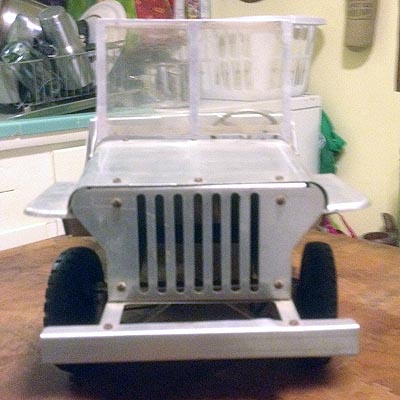 The front grille on this model is also significant. It's different from the grille on the Marx and the Wood Commodities toys. However, like them it does have the seven slots of the postwar CJ-2A. If it was based on the wartime MB and GPW, it should have nine slots, and it seems likely the headlight holes would also have been punched out.

The model is pretty well proportioned, with the fairly obvious exceptions that the front bumper projects too far and the windshield is too tall. 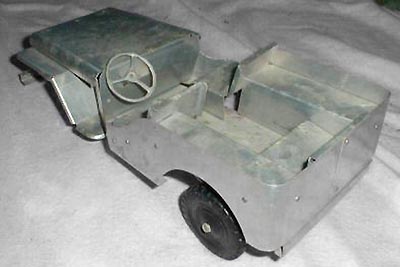 The example sold on eBay in 2006 has the same cast aluminum steering wheel and plastic tires, although the front wheels and most of the steering mechanism are missing. It's also missing the windshield, but the rest of the model appears identical. 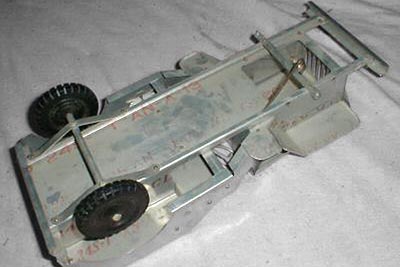 The underside of this one shows more distinct lettering stamped in red ink on the aluminum, "24S-T-AN-A-13", which indicates 24S-T Alclad, Army-Navy Specification AN-A-13. This could date from the 1940s but is still available. (1) 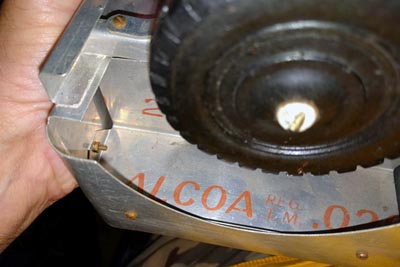 Tom Gallagher sent some detail photos of a similar Jeep he bought about six months ago. The wheelwell shows not only the Alclad spec number, but an Alcoa stamp indicating the thickness of .020 inch. Tom comments, "Gauge of the metal is too thin to have come off a plane. When I got it there was 20 pounds of bubble wrap covering it. They are very delicate. Too delicate to have come from Japan." 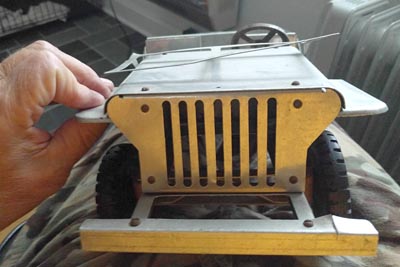 He adds, "Mine does have the windshield but no glass, and no signs of glass or plastic ever there. And what I don't understand is the front bumper sticks out too far. The chassis seems almost an inch too long. "

As well as being too tall, the windshield appears to be made from the same aluminum sheet, so it's pretty flimsy. 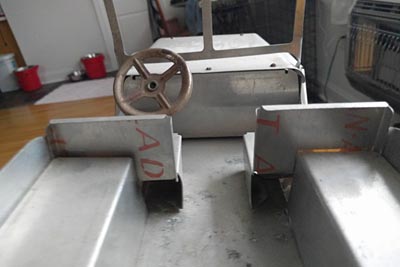 Although the body construction seems to be identical to Steve's Jeep above, this example has a different steering wheel, which looks like stamped steel. 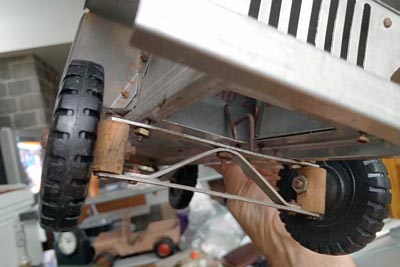 And the steering linkage was never completed. The wire coming down from the steering wheel is simply bent back up above the frame, and there are no tie rods. The wooden dowel used for the steering knuckles is also thicker.

Tom's overall comment on the model: "I figured it was a kit of some kind or built by a model maker. I'd put 100 bucks that the 'MacArthur' note does not go with this Jeep." 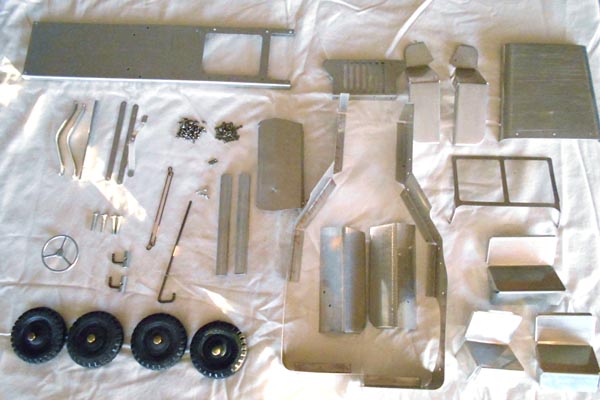 Well, here's the answer. Gary Keating remembered that Dave Eilers had saved pictures for eWillys.com, of a 1946 Jeep kit sold on eBay in 2015.

And there they are -- all the parts, including the steering wheel and little steering knuckles that had been lost when Tom's Jeep above was put together. 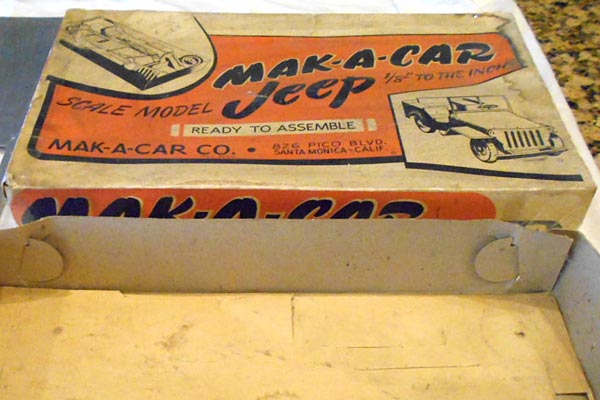 The Mak-A-Car 1/8-scale Jeep kit was produced in California. The company name sounds as if they may have marketed other kits, but I haven't seen references to any. The box says "ready to assemble" and that seems to have been the case -- it doesn't look like it needed much in the way of cutting or filing to prepare the parts. 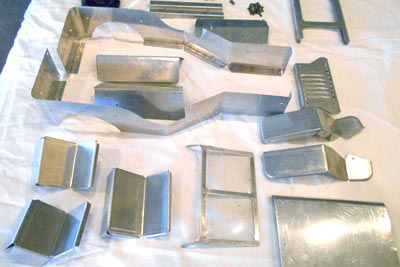 Here's another angle of some of the parts. I guess one remaining mystery is why the front bumper and windshield were not proportioned correctly in this otherwise carefully designed and produced kit. 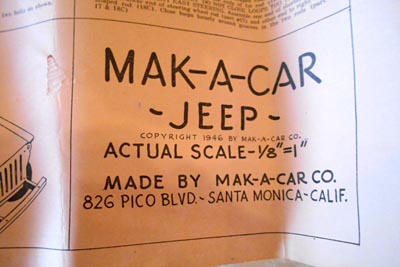 The instruction sheet indicates the kit was copyrighted in 1946, and manufactured in Santa Monica, California. 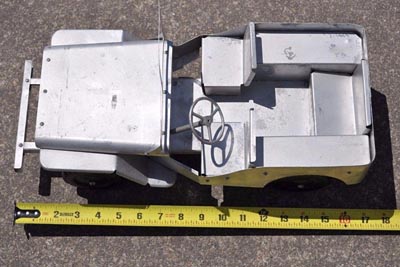 One more assembled example was seen listed in an online auction by WorthPoint. The overhead view reveals how difficult it is to keep the windshield frame straight. 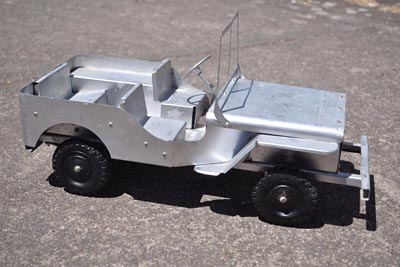 This Jeep seems to be complete and well-assembled. It was painted with a silver paint, which seems like an odd choice since the paint looks pretty much like the unfinished aluminum, but has probably deteriorated more than the Alclad sheet would have.


Of course another remaining mystery is where the "MacArthur Jeep" note came from, and why it came to be with Steve's assembled Jeep for all these years. We may never know the answer to that one.

Thanks to Steve Olguin, Glenn Byron, Tom Gallagher and Gary Keating for contributing to this page. -- Derek Redmond