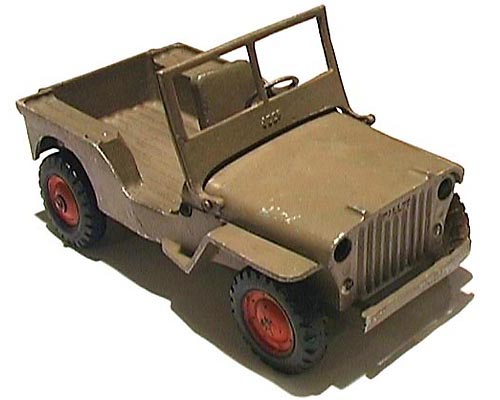 This Jeep model is immediately recognizable as one of the Al-Toy Aluminum Toy Jeeps made in the late forties by Toledo Brass, but has a number of details different from most examples you run across. The differences in this early Al-Toy reflect features of the first CJ-2 civilian Jeeps, and features of the more labor-intensive manufacturing process apparently used in the immediate postwar period when only small numbers of Al-Toys were being produced.

Comparing this Jeep owned by Fred Coldwell with a later example owned by Adam Sparks (below) reveals some of those distinctive details. 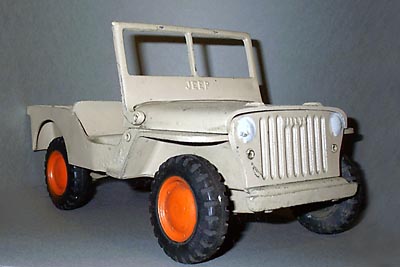 The other obvious change on the later version is the replacement of screws by rivets. The fasteners on the front grille were also moved to put them in the location of the parking lights.

Adam's full side view photo (50K JPEG) of the later Al-Toy shows "6.00x16" and "ALTOY" molded into the tires, a detail missing from the early version. 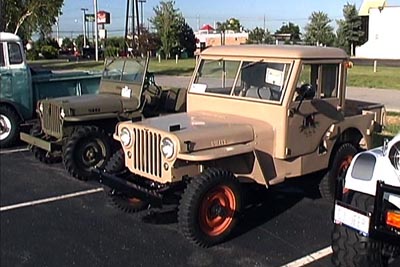 The Harvest Tan paint, with Sunset Red wheels, was a close match to a color scheme used on the real CJ-2As, although it doesn't include the pinstriping found on the wheels of the full-size version. This photo from the 2002 Spring Willys Reunion shows Don Dill's 1946 CJ-2A, with Fred Coldwell's CJ-2 pilot model behind.

The CJ-2 was likely the basis for not only the headlights on the early Al-Toy, but also the "Jeep" logo cast into the Al-Toy windshields. 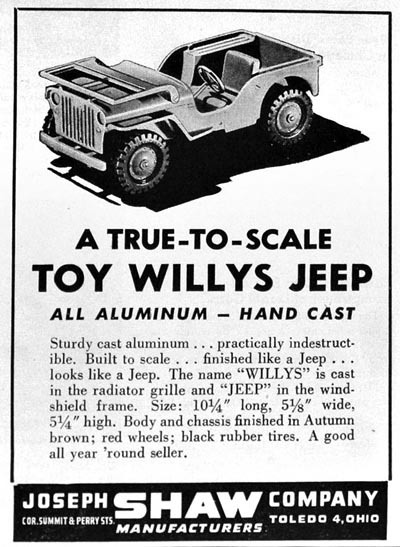 This ad, from Toy and Novelties magazine of April 1946, is a bit of a mystery. It appears to show the early CJ-2-style Al-Toy, and identifies it as being manufactured by the Joseph Shaw Co., a tool maker in downtown Toledo.

Did this company make the first Al-Toys for Willys? Were they connected to Toledo Casting (also referred to as Toledo Brass or Central Casting at different times) who produced the later Al-Toys? Or did Joseph Shaw lose the contract to Toledo Casting for some reason? Were they still selling this early version in 1946, in competition with the CJ-2A version made by Toledo Casting? 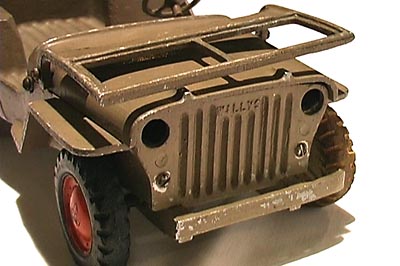 A front detail photo shows the open space behind the front bumper, which was solid on later Al-Toy castings. This opening can be seen better in a bottom view photo (40K JPEG), which also reveals a muffler positioned as on the CJ-2, and holes which apparently held transmission and transfer case shifters. There is no number on the bottom of the casting like the single digit usually seen on later versions which presumably represents a mold number. 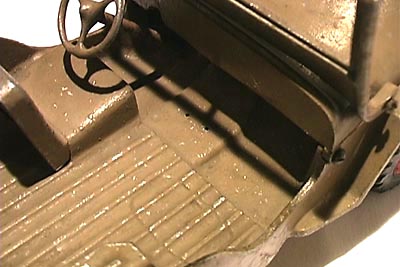 This view from above shows the holes in the floor for the shifters, and also the single driver's seat. Passenger seats, which were optional for many years on Universal Jeeps, were added to the later Al-Toy models. They covered up a nice detail visible on this early casting -- the outline of the door for the toolbox in the floor.

The well-proportioned cast steering wheel was later replaced by a stamped flat version. The steering wheel and the screws in the taillight positions are visible in a rear view photo (30K JPEG). 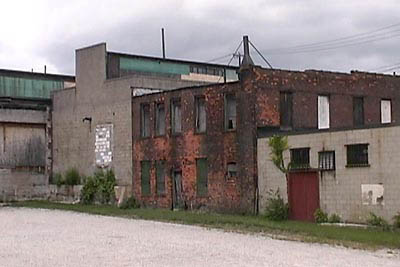 The Toledo Brass plant where most of the Al-Toys were apparently produced, is about 8 blocks up Summit Street from Shaw Manufacturers, and across the street from Mona's Riverview Lounge. This 2002 photo shows the rear of the complex of buildings, which slopes down to the river. See also the front of the building (35K JPEG) which was at one time converted into a filling station.