Toys based on Jeeps working at airfields have followed both military and civilian prototypes. The 1:42 Tomica diecast toy with tank trailer (above) represents the Mitsubishi CJ-3B which was used widely at aiports in Japan (see Airport Jeeps Around the World). Tomica may not have been aware that the tank was designed for emptying aircraft lavatories. See also the Tomica packaging (30K JPEG). 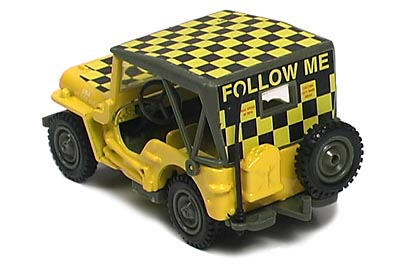 This 1/43-scale MB made in France by Solido is typical of jeeps in use at World War II or postwar British airfields. The "Follow Me" instruction is for pilots, while the smaller "Max Speed 40 MPH" and "Caution Left Hand Drive" warnings are for impatient local drivers. A front view photo (35K JPEG) shows an American flag on the grille, which may or may not be based on a particular prototype.

An RAAF "Follow Me" Jeep on CJ3B.info is an example of a prototype with the yellow and black checkerboard paint scheme. See also a restored M38A1 (50K JPEG, photo source unknown.) 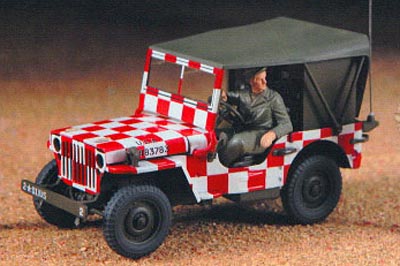 Another "Follow Me" option in a slightly smaller scale is this Hasegawa 1/48 plastic kit. See the photos on the box (100K JPEG). It's a nice little model, although an online review finds the kit overpriced, and the red and white decals difficult to apply over the olive drab body. 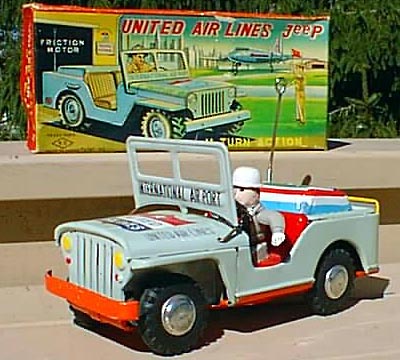 The back of this tinplate piece made by K.O. of Japan has a "Follow Me" sign, and the deluxe lithography also includes an illustration of an airplane behind the driver, and a United Airlines logo on the hood. The driver's left arm moves up and down in a turn signal as the Jeep rolls along.

Gary Keating has several other United Airlines examples in his airport tinplate collection (80K JPEG), as well as Jeeps marked for American Airlines and TWA. 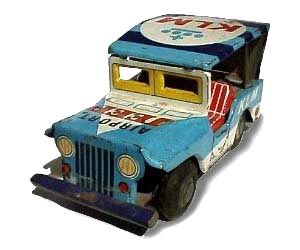 Another nicely lithographed toy is this airport Jeep carrying the KLM (Royal Dutch Airlines) logo on its roof. See also Tinplate Lithography on Jeep Toys: How It's Done on CJ3B.info. 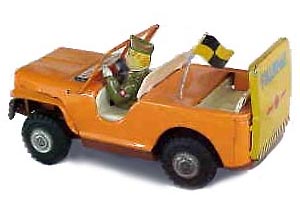 This small Japanese tinplate "Follow Me" Jeep with checkered flag is apparently based on examples like the Eighth Air Force MB (80K JPEG) on the cover of Christopher Anderson's book.

Anybody have any other toys we could add to this page? -- Derek Redmond

See more prototype Jeep photos in Airport Jeeps of the 1960s and the Willys publication Jeeps for Aircraft Ground Support.