After I found two movies from India with love songs sung in a CJ-3B (see Aradhana and Dharmatma), I thought it was an unusual coincidence and I didn't really expect to find another one. Little did I know that those were actually two of many Hindi language films with similar scenes.

I ran across a blog post titled "Ten of my favourite jeep songs", with comments submitted by readers suggesting probably ten more examples. Most of them were CJ-3Bs and of course they were all from "Bollywood" cinema. It gives you a sense of just how common the Mahindra high-hood Jeep was in India for many years. (You'll notice that most of these films are from the 1960s and 70's.)

It's difficult to really capture the flavor of these scenes in a few still photos, so in case you don't mind the Bollywood music, over-the-top acting and bad lipsyncing, I have included links to video clips. But the two films above, which I covered in some detail on CJ3B.info, are still probably two of the best. 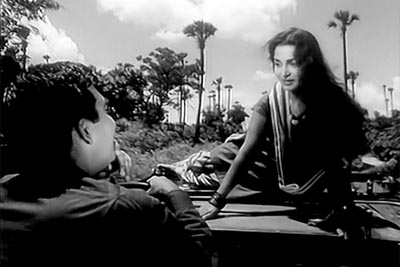 The earliest example I've seen is from a black & white film from 1960, and it didn't really set the pattern, because rather than the usual song by a lovelorn man, it's a woman singing to a man. 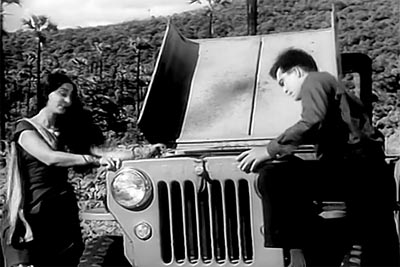 He manages to keep the Jeep on the road, even when she's lying on the hood. But at one point the Jeep breaks down. 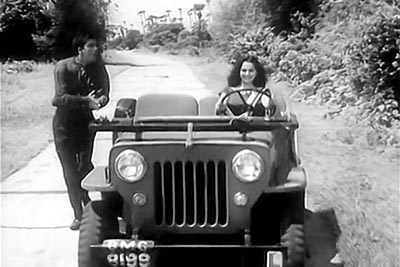 And she even jumps into the driver's seat for a while. You can see and hear her whole song on YouTube. 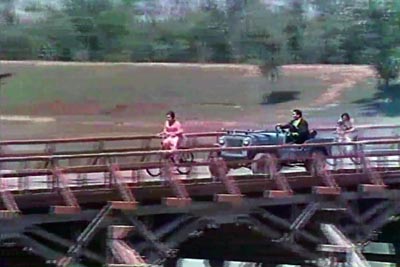 A more typical situation is this Jeep driver singing to a young lady sedately riding her bicycle: "There must be someone who shall spare me a glance. There must be a lovely sight in my life's game of chance." 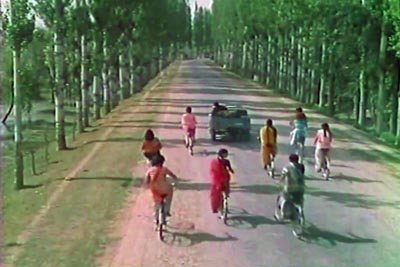 There's a colorful group of girls on bicycles, but he only has eyes for one. You can watch the scene on YouTube. 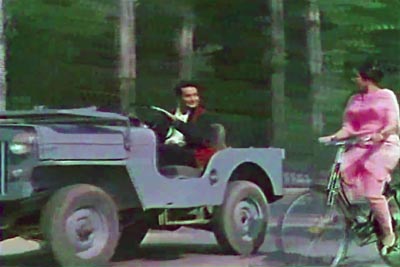 He can't take his eyes off her.. 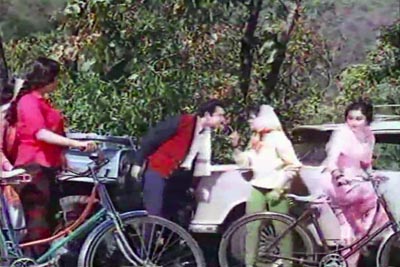 .. and drives straight into an oncoming car. Luckily these head-on collisions during Bollywood songs don't tend to be very serious. 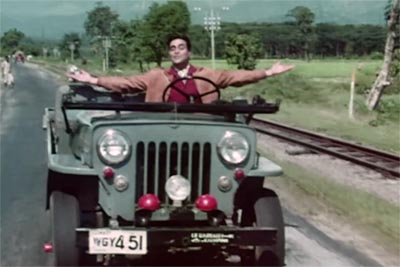 Nobody really keeps their eyes on the road or their hands on the wheel in these scenes, even this fellow whose girlfriend is off flying somewhere in a DC-3 while he's alone in his extended-body Mahindra (decked out with fancy dual horns.) 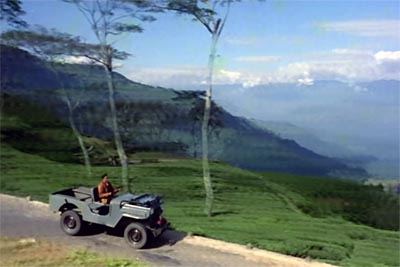 Often the Jeep scenes are shot in beautiful mountain scenery in northern India, where you really wouldn't want to go off the road.

The song "Kaun Hai Jo Sapnon Mein Aaya" is a remake of "Marguerita", sung by Elvis Presley in Fun in Acapulco. See this one on YouTube. 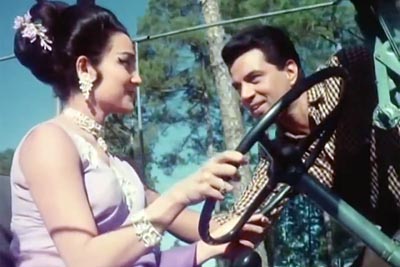 This sweet example has the girl doing most of the driving, leaving loverboy free to climb all over the Jeep. 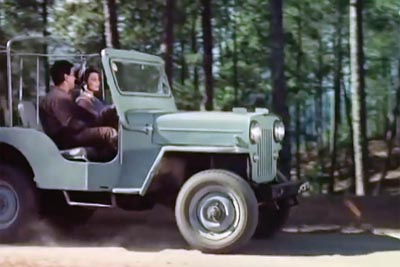 The scene is from Shikar, a huge box office hit in 1968, and actually a murder mystery. The song is on YouTube. 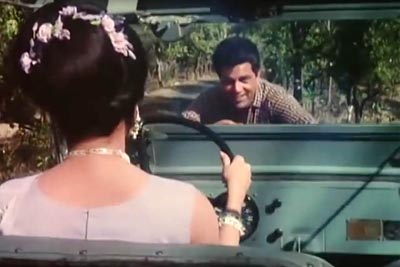 The Jeep is a nice example of an early Mahindra-built CJ-3B, very similar to a Willys with ventilating windshield. It's also the only open Jeep here with the windshield up. 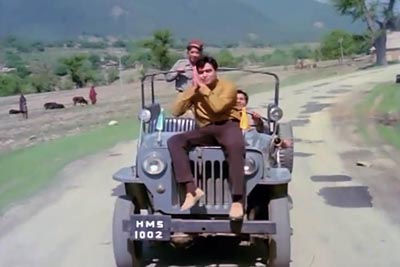 This one doesn't even have a windshield. It's another scene with gymnastics by the singer, but not a love song. The main character here is a garage mechanic, singing about being footloose and on the road. 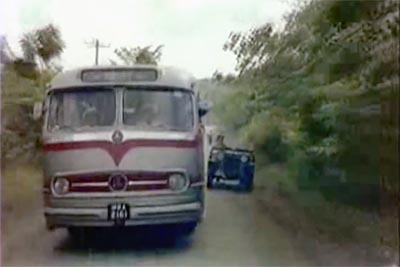 In this film our Jeep driver is pursuing a woman who is riding on this Mercedes bus. Some of the other passengers lean out the windows and sing along with his song. His Jeep is the first right-hand-drive version we've seen here, following Mahindra's switch from LHD production to RHD in 1968. 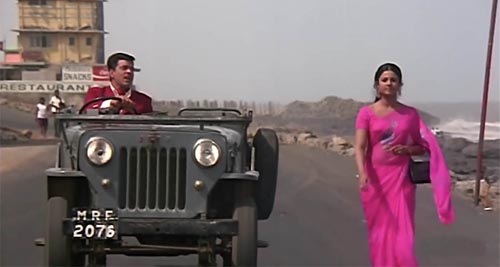 The title means "Two Thieves," and Tony is trying to help Sandhya recover items of jewellry taken when her mother was swindled by four men. Of course he falls in love and follows her in his Jeep. 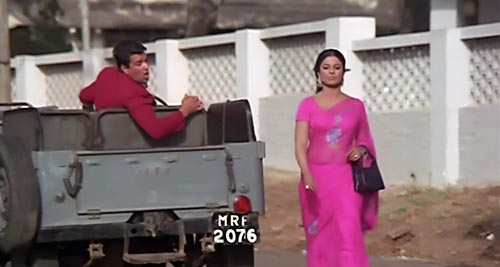 When Sadhya tries to ditch him by walking up a one-way street, he follows her in reverse.

The flat tailgate is one of the quick ways of identifying a Mahindra Jeep. 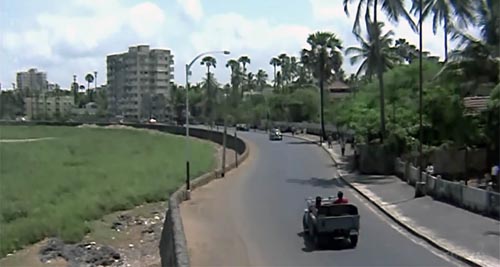 Naturally Tony's song convinces Sadhya, and they end up driving together. The setting is Bombay, rather than the usual country roads. Watch the whole song on YouTube. 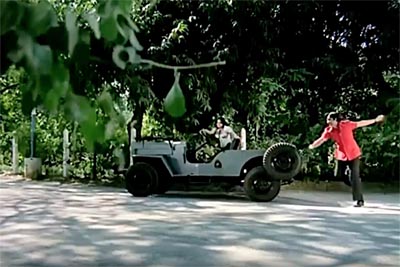 This is a film that was actually somewhat of a landmark in the development of more socially relevant Indian cinema, although you wouldn't know it from this scene. It begins with Ravi dancing around as his girlfriend Veera climbs into the driver's seat of the Jeep. 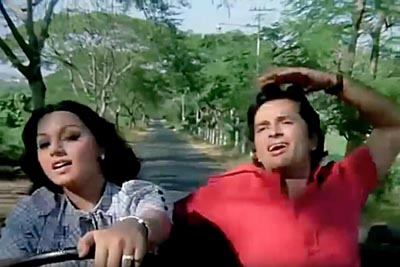 Neetu Singh and Shashi Kapoor play the lovers, singing Keh Doon Tumhe ("Shall I tell you what's in my heart today?") as Veera drives.

Ravi is a policeman whose brother has become a gangster, although at the moment he has no concerns except Veera. The title Deewaar ("The Wall") refers to the wall between the two brothers. 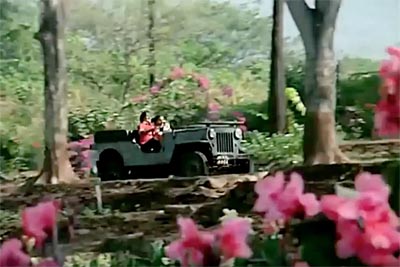 For some reason, almost every CJ-3B in an Indian film is grey. Maybe it's a tribute to Nellybelle? But this Jeep is actually the long-wheelbase version, designated by Mahindra as a CJ-4. 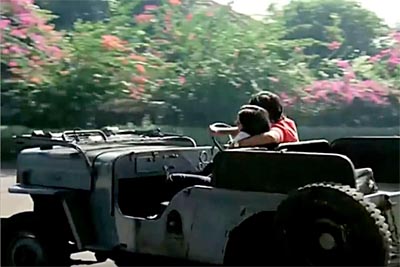 After switching drivers while moving, and then dismounting briefly to finish the song, the couple climbs back into the Jeep and drives away.

This one is different -- the windshield and top are up, and the spare tire is on the left despite the Jeep being left-hand-drive.

And it's a family scene, with the dad singing. The teenaged son is driving, and when he gets passed by this little green car...

...he steps on the gas, for the only real excitement in the sequence. See it on YouTube. 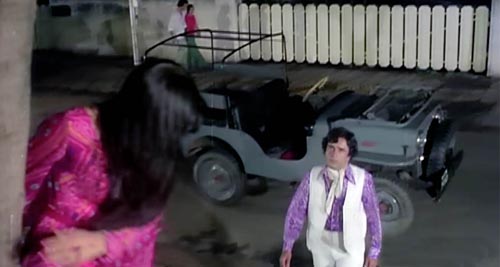 A scene from Suhaag, which was the biggest box office success in India for 1979. It's a complicated gangster story involving twins who end up on opposite sides of the law. 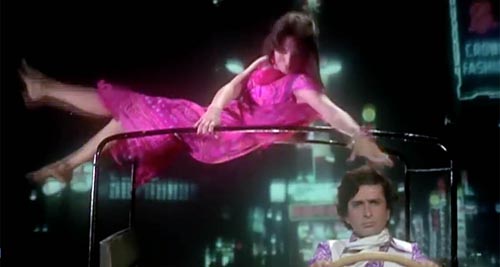 This time it's the lady who gets to do the gymnastics. She's a little inebriated and he's not happy. Watch on YouTube. 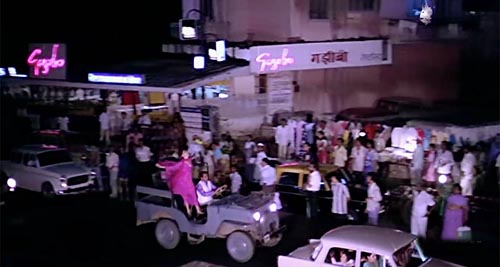 The night exterior in the big city is unusual. So is the Jeep -- another one of those short-wheelbase, extended-body Mahindras. 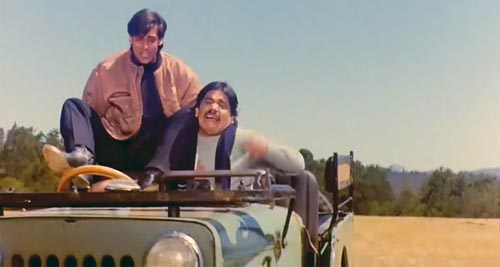 The latest example here was the highest grossing Bollywood film of 1991 -- CJ-3Bs seem to be a key ingedient for box office success. Steering with the feet is the new trick here. 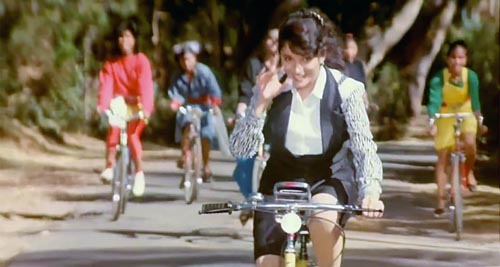 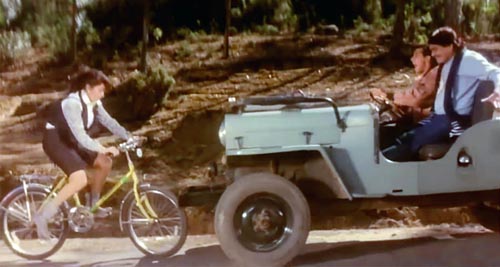 This time the head-on collision is with a bicycle, but once again no damage done. Watch all the zany antics on YouTube.

That's probably more than you wanted to know about CJ-3Bs in Bollywood. But has anybody run across any more recent examples? -- Derek Redmond

See also Aradhana and Dharmatma on CJ3B.info for more love songs in Jeeps.