Love Song in a Jeep

From the classic Bollywood film Aradhana (1969)

In my long list of movies with appearances by CJ-3B Jeeps, there are some strange ones, but this was the first time I found a musical with a love song performed in a CJ-3B. (I later also found Dharmatma and then More Bollywood Jeep Songs!)

Aradhana is a 1969 movie from India, directed by Shakti Samanta and starring Sharmila Tagore and Rajesh Khanna. It dates from the era when the Hindi language film industry was first being referred to as "Bollywood" (a mashup of Bombay/Hollywood.) The hugely popular movie was a remake (1) of the 1946 American film To Each His Own, which won Olivia de Havilland her first Academy Award for Best Actress. (2) 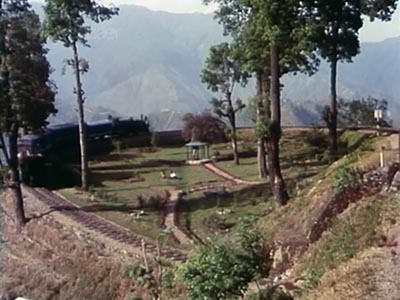 Aradhana begins with shots of a steam locomotive and train (90K JPEG) on the famous Darjeeling Himalayan Railway, a 2-foot narrow gauge railway completed in 1881 between New Jalpaiguri and Darjeeling, in the foothills of the Himalayas in northeastern India. 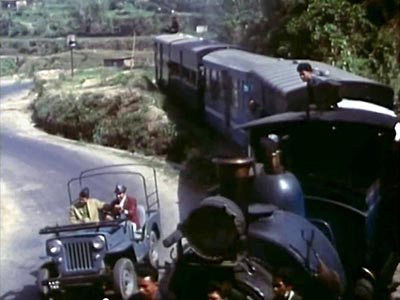 Soon a Jeep appears on the narrow road paralleling the railway, and chases the train as music begins to play. The scene takes place in the late 1940's or very early 50's, so the CJ-3B is not totally authentic for the time period.

Riding in the Jeep is Arun, an Indian Air Force pilot who is pursuing Vandana, a college girl travelling on the train. The driver is his Air Force buddy, Madan. 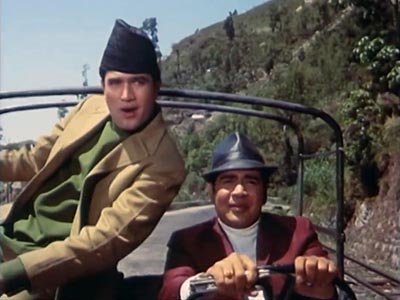 Arun (played by Rajesh Khanna) breaks into a lipsynced song called Mere Sapno Ki Rani ("Woman of My Dreams.") Some of the heartfelt lyrics:

The song, composed by R. D. Burman and sung on the soundtrack by Kishore Kumar, was a big Bollywood hit in 1969 and has remained popular ever since. 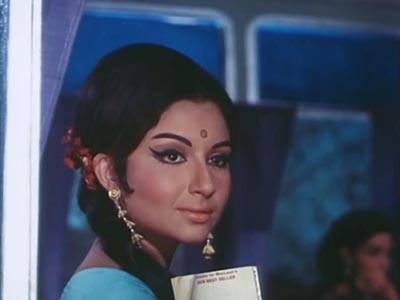 The object of Arun's affections on the train, is Vandana (played by Sharmila Tagore) who is returning from college to her father's home in Darjeeling. She pretends to ignore him but demurely sneaks glances.

At times she hides behind the book she's reading (50K JPEG) -- When Eight Bells Toll, Alistair MacLean's novel about the hijacking of cargo ships in the Irish Sea, published in 1966 (which is much later than the supposed time period of the scene.) 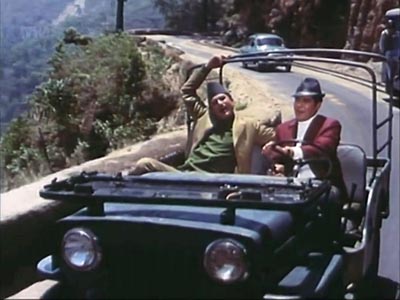 In some great travelling shots taken from the train, Arun works hard to win Vandana's attention. His gymnastic performance of the song is fearless, despite the cliff at the edge of the road, a few feet away. He makes good use of the framework for the Mahindra Jeep's canvas top.

Probably the Jeep is supposed to look military, but it obviously is not an actual Indian Air Force Jeep (90K JPEG). (5) 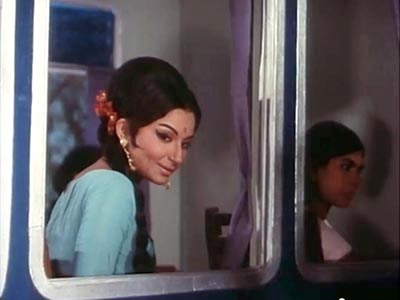 We never see Arun and Vandana in the same frame, because Sharmila Tagore's footage was shot separately in Bombay (now Mumbai) where her train window was built in a studio. (6) 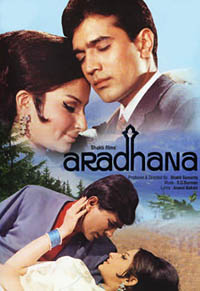 The rest of the story of Aradhana is long and complicated. The couple fall in love and are secretly married, and Vandana becomes pregnant. But Arun is killed in an air crash, and Vandana is forced to give up her baby son for adoption. Not revealing her identity, she takes a job as his nanny, and later takes the blame after her son Suraj kills a man. She goes to jail and Suraj forgets her. 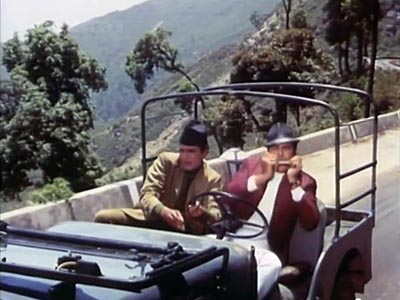 The conclusion of the song Mere Sapno Ki Rani in the opening scene, has Madan taking both of his hands off the steering wheel to play a harmonica solo, leaving Arun to grab the wheel. (The Jeep is clearly being towed by a camera truck through most of the scene.)

As the Jeep passes the train (70K JPEG), we can just glimpse an "apple box", one of the standard tools of filmmaking (7), positioned in the back for Rajesh Khanna to lean on during his gymnastics. 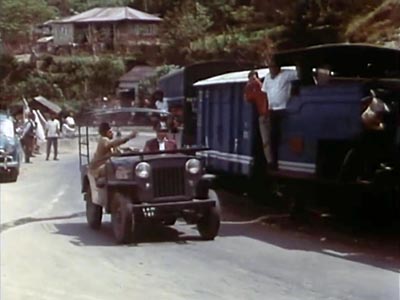 When the little train pauses at a station, the Jeep continues up the road to Darjeeling.

The Darjeeling Himalayan Railway, which still uses some steam locomotives, was declared a World Heritage Site by UNESCO in 1999. (3) 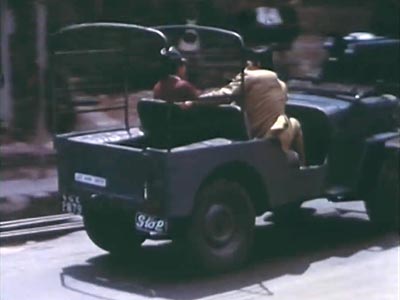 As the music fades out and the Jeep pulls away, we can see the word "Stop" helpfully painted below the taillight, and a sticker on the tailgate which appears to say "Left Hand Drive." We also get a glimpse of another CJ-3B in the background. 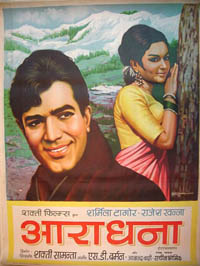 An original Hindi language poster for Aradhana is seen here. The title (which translates into English as "Worship") refers to the devotion of Vandana to her husband and son.

The film turned Rajesh Khanna into Bollywood's first superstar. (I think the Jeep may have had something to do with it.) He appeared in 180 films and later became a politician and was elected to the Indian Parliament. Khanna died of cancer at his home in Mumbai at the age of 69 in 2012. (8)

Thanks to Adil Kadri for telling me about this scene. You can watch and listen to the whole song on YouTube. -- Derek Redmond

See more Mahindras and other high-hood Jeeps onscreen in The CJ-3B in the Movies.