There are many photos of CJ-3B Jeeps in Vietnam on CJ3B.info, but as I assembled the collection on this latest page, I was struck by how it covers almost the entire duration of the Vietnam War (known in Vietnam as the American War) and includes all three variations of the high-hood flatfender seen in country during the war: the Willys CJ-3B, Kaiser Jeep M606, and Mitsubishi CJ3B-J4.

CJ3B-J4 Military Jeeps built by Mitsubishi in Japan were supplied by the U.S. to the South Vietnamese army (known as Army of the Republic of Vietnam, or ARVN), because the cost was lower than shipping Willys Jeeps from the U.S. They can be quickly recognized by the split-pane windshield, vent below the windshield, electrical connector on the right side of the hood, and distinctive headlight guards. 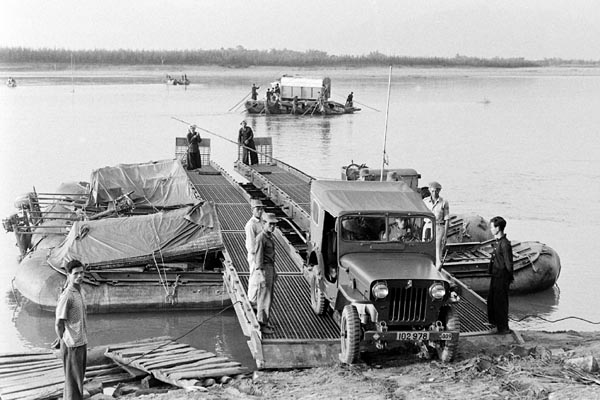 The ARVN Jeep seen here being ferried across an unidentified river in 1961 is a combat-ready, 24-volt model J4C, recognizable by the lifting rings on the front bumper.

This LIFE magazine photo (1) is by Howard Sochurek, who had started working for LIFE in 1950, and by 1961 already had plenty of combat experience. Sochurek was a WWII veteran, and as a photographer he had parachuted behind enemy lines in Korea, and been in Vietnam to cover the fall of of the French garrison at Dien Bien Phu in 1954. (2) 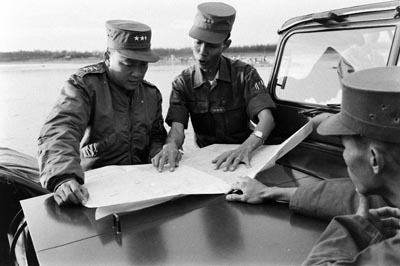 Sochurek grabbed this closer shot of a 3-star ARVN General getting a map briefing on the hood of the apparently brand new Jeep.

I was curious about the identity of the Lieutenant General who rated the shiny new J4C, and after looking through photos of the ARVN General Staff, I recognized him as Lt. Gen. Tran Van Don, commander of ARVN's I-Corps in the early 1960s. The I-Corps Tactical Zone covered five northern provinces -- the front lines in fighting the the North VIetnamese Army and the infiltratioin of Viet Cong insurgents. 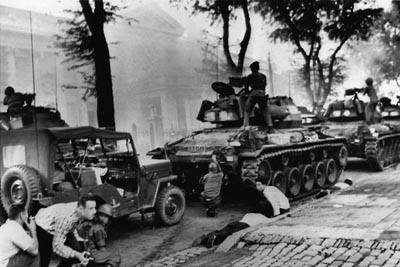 Lt. Gen. Don was also one of the generals who plotted the military coup that resulted in the murder of President Diem, on 1 November 1963. Rebel tanks are seen in this Associated Press photo, attacking the fortified presidential palace in Saigon during the coup, unaware that President Diem had already escaped from the palace. Diem was captured and shot the next day. (3)

The U.S. government was aware of the coup plans in advance, and did not oppose them. John F. Kennedy recorded a dictaphone tape (JFK Archives) expressing his regret about that decision, after hearing about the killing of Diem. It would be less than three weeks before Kennedy himself was assassinated. 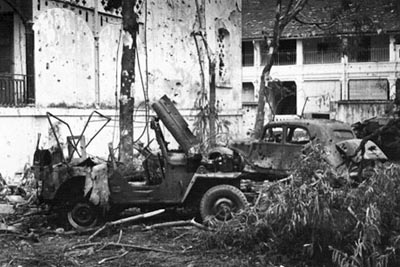 Reportedly a total of 33 people were killed in the fighting between rebels and loyalist troops (4) and this Mitsubishi J4 seen in the aftermath of the coup appears to have gotten in the line of fire.

Lt. General Tran Van Don retired from the Army in 1965, and later served as Deputy Prime Minister and Minister of Defense (5) until 29 April 1975, when he was one of the evacuees aboard the famous American helicopter on the rooftop, as Saigon fell to North Vietnam. (6) 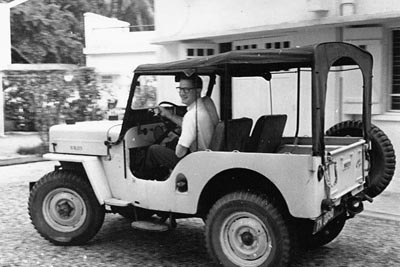 American Foreign Service Officer Dick Teare drives a U.S. embassy Jeep in this photo by James Rosenthal, variously dated as 1963 or 1965. (7) According to Rosenthal, Teare belonged to "a unique unit called the Provincial Reporters. The unit’s members were specifically assigned to travel the countryside beyond Saigon to observe and report on conditions there. Their reports were highly valued and used by senior officers, both civilian and military. Their travel was often arduous and sometimes dangerous." (8) 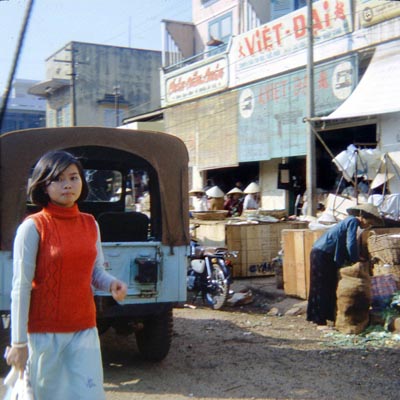 The black & white photo above shows light-colored paint that might be Foam Green, Sierra Blue or Transport Yellow (see Willys Paint Samples 1959-65). The WILLYS stampings are highlighted in a darker color, and the wheels appear to be body color or possibly slightly darker.

This color photo shows what could be a similar paint scheme, with a red WILLYS stamping on light blue. It's frustrating that this interesting shot by an unknown photographer shows only the rear of the Jeep, which has the optional tailgate spare tire mount, but no bumperettes or pintle hook. The lack of a passenger-side taillight suggests this is an early-50's CJ-3B, well taken-care-of and repainted.

The undated photo is identified as being taken in Ban Me Thuot. (9) 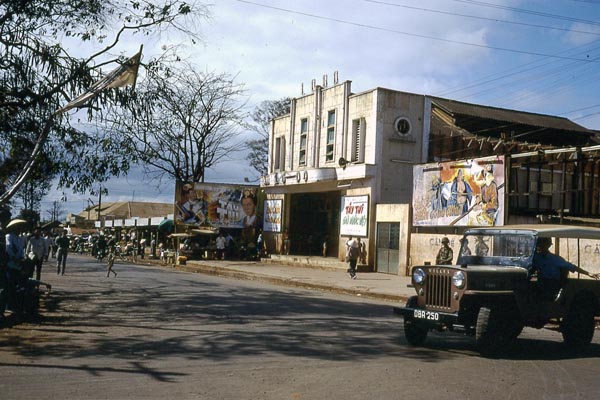 Also identified as being in Ban Me Thuot is this scene of a military driver signalling a left turn, with the Lo Do movie theater in the background. The Jeep is a civilian 3B, with black windshield frame and white WILLYS logos, but apparently painted in an olive drab (or possibly Treebark Brown?)

I tried to date the photo using the movie title Tay Thi on the marquee, but although the popular Vietnamese folktale has been made into various movies and TV shows, I couldn't find one from the 1960s. 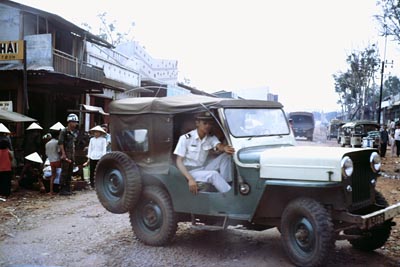 This is a nice shot taken in August 1967, courtesy of Frank Thomas Goins at Bobcat Alpha, a Flickr site which is an extensive memoir of the daily life of U.S. soldiers in the mechanized infantry in Vietnam.

This is a late 50's or early 60's CJ-3B being used as a South Vietnamese police Jeep, with an interesting paint job and a good use of the fresh air vent hole as a spot to mount a whip antenna. 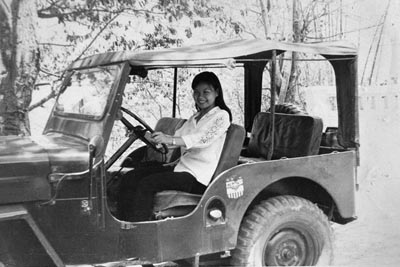 Many of the militarized M606s built by Kaiser Jeep in the 1960s carry the clasped-hands logo (130K PNG) of the Mutual Defense Assistance Program (MDAP) under which the U.S. provided the Jeeps to allied nations. The sticker can be seen applied slightly cockeyed in this 1968 portrait of a young woman posing at the wheel.

The Jeep appears to be missing the rear bumperettes, but other details of the M606 Military Jeep, such as the blackout lamp and lack of WILLYS stampings on the hood, are not visible in this photo.

The paint on the MDAP Jeeps in Vietnam was typically a dark olive semi-gloss. 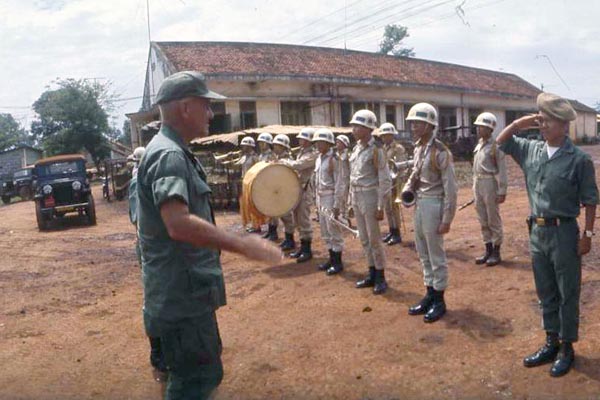 General Creighton Abrams inspects an ARVN unit in this undated LIFE magazine photo taken by Co Rentmeester. (10) It looks like Gen. Abrams has been driven to this event in the ARVN M606 in the background, with 4 stars on the bumper. 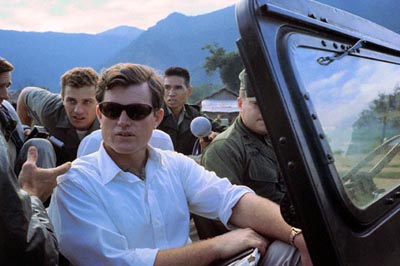 One of the sources of pressure to get out of Vietnam, was Senator Edward Kennedy. He had begun to speak out against the war by 1967, focusing mainly on the need for draft reform and the U.S. failure to provide for the Vietnamese war victims. (12)

Ted Kennedy is seen here on a trip to South Vietnam in January 1968. Following this trip, Kennedy became increasingly critical of America's involvement in the war (which his brother John F. Kennedy had significantly escalated by allowing the coup of November 1963, described above.) (13) 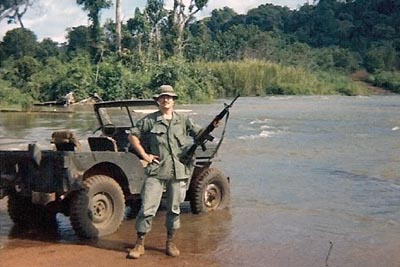 As the sixties became the seventies, there were still a lot of U.S. personnel and casualties, and although the M151 MUTT was the most widely used Jeep, various units made use of high hoods such as this CJ3B-J4 photographed near Nhon Co in 1969.

The picture is courtesy of ohiogman at G838.org, who says, "I can recall driving a CJ3B that we had as a kind of taxi for moving aircrew, whose Cobras and Huey gunships were being re-armed and refueled, to and from the small mess hall we had. I have a pic of it down at the stream fording, with some young trooper standing beside it." (14) 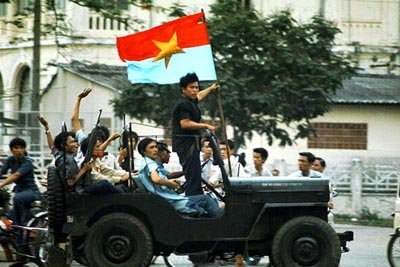 The end came on 30 April 1975, when Saigon (soon to be renamed Ho Chi Minh City) fell to North Vietnam. Thousands of American citizens and South Vietnamese with close ties to the U.S. had been evacuated by helicopter the day before, but tens of thousands of South Vietnamese left behind were killed. (15)

This image of a Jeep commandeered for Viet Cong celebrations, was taken by photographer Hervé Gloaguen (Gamma-Rapho via Getty Images). (16) The inscription stencilled on the hood is a bit too small to read.

Thanks to Federico Cavedo and Jeff Heidman for locating some of the photos. -- Derek Redmond