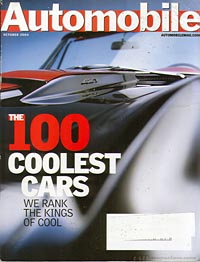 The CJ-3B is now officially cool! The Omaha Orange CJ-3B brochure photo appeared in the October 2004 issue of Automobile magazine, illustrating the choice of the Jeep CJ as #29 on their list of the 100 Coolest Cars of all time. The CJ was the only 4x4 to make the the list. Unlike most entries on the list, which identify a specific model and/or year, the "CJ" label could encompass models from 1945-86. But the editors' choice of the CJ-3B as the illustration speaks volumes.

The issue, with the 1963-67 Corvette Sting Ray (#1 coolest car) featured on designer Richard Eccleston's cool cover, proved to be one of the most popular in the magzine's history, and a used copy is hard to find. Just behind the Sting Ray were the Porsche 911 at #2 and the Shelby Cobra at #3. Although many of the top 100 were expensive sports cars, the 1955 Chevy Bel Air was not far ahead of the Jeep at #22. 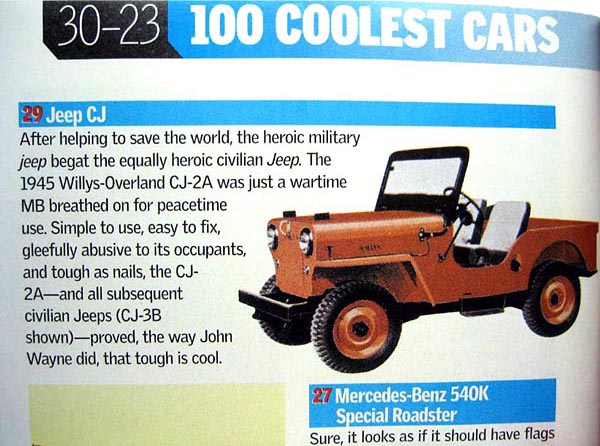 Thanks to Dan Fedorko for scanning the magazine page. -- Derek Redmond

Elsewhere on CJ3B.info, see a couple more things the Corvette and CJ-3B have in common besides their coolness.