Prior to the availability of fiberglass hardtops as an optional Jeep accessory in the 1970's, a hardtop meant a steel or aluminum roof made by Koenig Iron Works of Houston, Texas, or other manufacturers (see below). Hardtops offered greater comfort in cold and inclement weather, but always had the drawback of being difficult to install and remove. 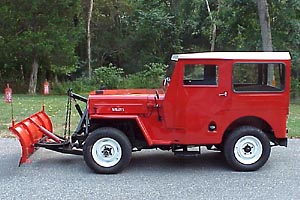 At the same time that many Jeep owners have sent their hard tops to the scrap heap, a few individuals are carefully searching them out and restoring them with as much care as they restore their Jeeps. The time and the price is right for those who would have a period hard top for their early civilian Jeeps. The finest made Koenig, Kelly and Worman tops, among many others, are rusting in back yards. They are heavy and unfashionable, but many are real beauties. Some, like this Kelly, are stunning in their economy of design, and almost seem to have grown naturally on the Jeep. This 1962 CJ-3B with its "top of the line" Kelly Custom Full Cab is owned by John Belden.

We sometimes forget that the earliest CJ had little to do with fun driving, and everything to do with work. The army called it a 1/4-ton truck, and its civilian version was viewed as something between a tractor and a truck. Many Jeeps were purchased with the standard Willys-Overland canvas top and some with no top at all. Weather changed their owners' macho attitudes, and long before the original canvas tops wore thin, an industry had formed. We'll probably never know how many companies made hard tops, but businesses large and small all over the world began competing to cover surplus military and civilian Jeeps. Jeep tops were naturals for sheet metal shops, wood shops, and even home workshops. If a material could shed water it was used as a hard top for Jeeps. 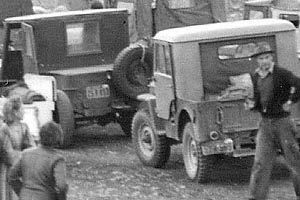 The names of most of the small companies have long been forgotten. At a 1949 Jeep rally a Willys steel halfcab is parked behind an unidentified half cab. This photo is from the Bovee family collection.

Many aftermarket tops were very similar to one another, but a few stood out as attractive, imaginative and sometimes bizarre solutions. There's something about a Jeep that stirs the imagination. Who can look at a topless Jeep without thinking to one's self, "I could make a top for that." And the beauty is, you could. The materials are available, easy to work with, and some are inexpensive. -- Bart McNeil

Continue to Willys-Overland Steel Cab or return to the Table of Contents.

Thanks to Bart McNeil for his research on this series, which was originally written in 2003. -- Derek Redmond