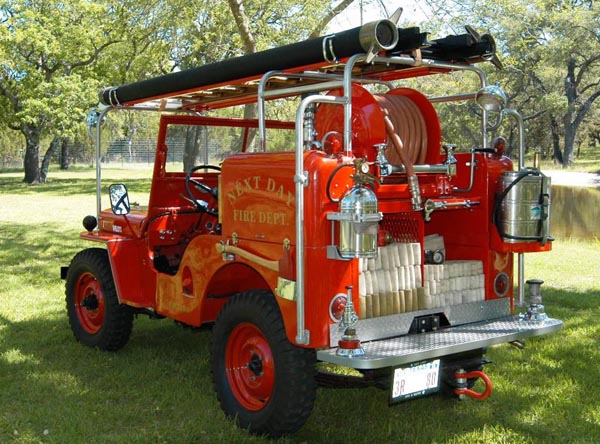 I am the current owner of a 1947 Willys CJ-2A fire Jeep. The Jeep was sold new on April 5, 1949 by West Motor Company, Steubenville, Ohio to the Wheeling Steel Corporation plant in Steubenville for the price of $2,900.00 net, with delivery ASAP. I have the original purchase order (140K JPEG) for the truck. It was used inside the plant and was outfitted by Howe with a hose reel. 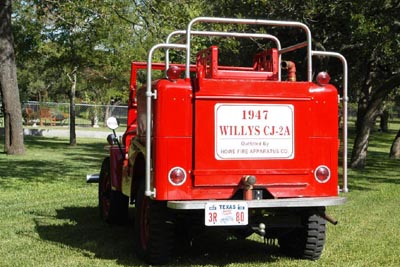 In May of 1969 it was transferred to the Pleasant Hill Volunteer Fire Dept. in the Steubenville area. They removed the hose reel and installed an 80-gallon water tank in its place, and it was now a brush truck. In 1997, the retired chief purchased the truck and started restoration of it.

I purchased it in July of 2005 from him on eBay with the water tank still installed (left). He had about 80 percent of the original reel parts and shipped them to me. They had also installed a large metal front bumper to counter the weight of the water tank (see a front view, 200K JPEG). He said he had pumped in 1997 and had not since. I have not tried to pump it myself. He also upgraded it to 12 volts. 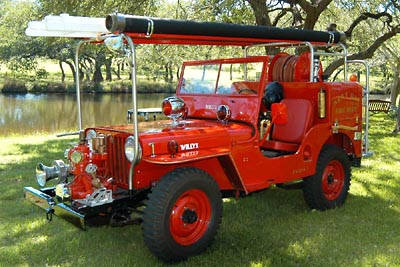 I have removed the water tank and bumper, found enough original era parts and manufactured others to restore it to an inside-plant fire truck. I have added some extra equipment that I had and the result is an original looking truck with modifications. 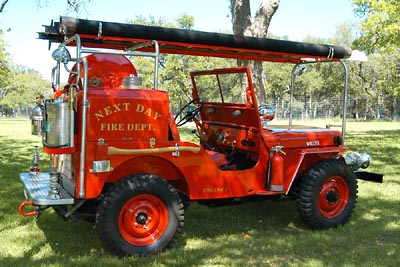 We call ourselves the Next Day Fire Department, i.e. we might be there by the next day, and have fun in parades and other events.

This is Engine 2 because Engine 1 was a restored 1936 Ford/Pirsch (80K JPEG). I no longer own that truck, and the reason is a good human interest story in itself. I knew some of the history of the Ford, originally a Mora, Minnesota fire truck until 1970. It was sold to an individual and stored in a warehouse for 25 years. Another individual in Wisconsin purchased it when the owner died and they sold his estate. He started restoration and I purchased it from him in 2001 and completed the work.

In January of 2004 I contacted the city of Mora to see if I could obtain more history on the Ford. The fire chief called me and when I told him I had their old 1936 fire truck there was dead silence on the phone. Finally, he said they had been looking for this truck for the past ten years and I had really made his day. He asked me if I would consider selling it, as their 100th anniversary was that year and they would love to have it by August. This was the first real fire truck that the department had owned.

I talked it over with my wife and we decided that the truck belonged back in Mora for historical reasons and I cut them a deal for the truck. I understand that the truck was quite a hit at their celebration. In February 2004 the 1936 Ford/Pirsch returned to service in Mora as their parade truck.

Thanks to Bill for the story and photos. -- Derek Redmond