My name is Magnus and I live in Reykjavik, Iceland. You could say that I'm one of those people who owns a CJ-3B because of CJ3B.info. The following is my Jeep story.

I bought a Jeep (which was also my first vehicle) in 1978 at the age of 16 -- a 1955 CJ-5. I did not have that one for long, but since then I've always had a special interest in Jeep vehicles and always wanted to have one again.

When I started using the Internet a few years ago, one of the first things I started looking for was something about Jeeps. I soon came across CJ3B.info, and it made me realize that 3B's were becoming very scarce in our country.

In general, most Jeeps over here have come from the USA. The exception seems to be the CJ-3Bs, which seem to have come from Israel. They are never referred to as 3B's but as "Israel Jeeps". It's pronounced as "Israelsyeppi" in Icelandic. Hear it as a QuickTime audio file:

Apparently the Israelis traded Jeeps manufactured in that country for Icelandic fish (see Israel Jeeps on CJ3B.info.) Fish and fish products were Iceland's major export goods. In those days much of the foreign commerce was exchange of goods and government representatives often participated in negotiating the deals. It is also possible that some of them came this way and that others came directly from USA. 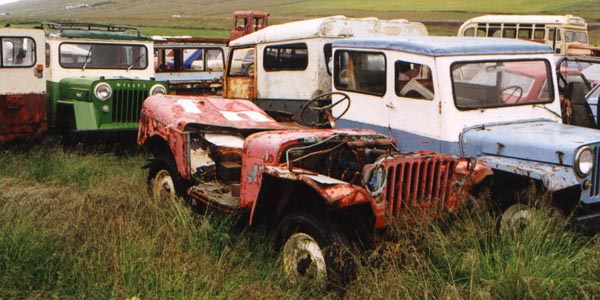 This picture taken at a farm shows a small section of the retired vehicles kept there in a field. Of course such a collection would not be complete without a CJ-3B. The hardtops in this photo are very typical for Iceland, being common on both CJ-2As and CJ-3Bs. The front fenders are also a common modification that was made to the old flatfenders. Probably to prevent dirt from being thrown over the vehicle. 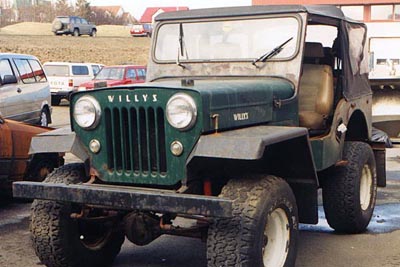 About two years ago I noticed this 1955 CJ-3B standing outside on a parking lot in an industrial area. When I saw it still standing there few months later I could not resist any longer, tracked down the owner and asked him if he was willing to sell it. He sold it to me for an amount that roughly equals US$400.

"Registered in 1954, it had serial number 57348-11369 (actually an early 1955 model), and had all stock running gear and stock steering gear, but had been lifted with a leaf over, and the front differential had been welded to lock it 100%. It had extra wide front fenders to cover the 36" tires that had been used on it.

My idea is to bring this "Israel Jeep" back to original looks. It needs to have the front fenders replaced, and probably most of the tub. (See a rear view photo, 60K JPEG.) The tailgate has some rust at the bottom but is repairable. 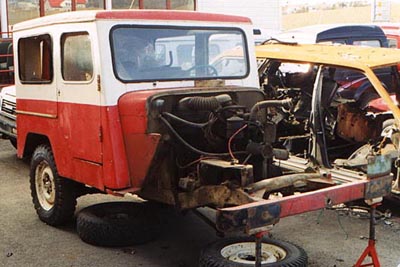 This red 3B was offered to me by the same owner. The serial number 57348-11353 is only 16 numbers from mine. I would have liked to have it, with its Icelandic-made tub and hardtop, but did not have a place to keep it. Oldtimers tell me that this top was made by the Jeep dealer (there is only one dealer in Iceland due to the small population of the country). 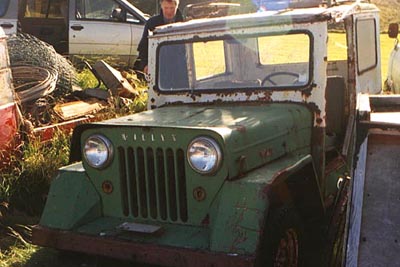 A farmer later gave this 1953 CJ-3B to me when I was looking for spare parts. He said it had been sitting where it was for over 15 years. The sticker from the annual vehicle inspection on the windshield glass read 1978 (I got this Jeep in the summer of 1998). The motor could be turned by hand. Three tires were flat. We pumped them with air, sprayed penetrating oil on the hand-brake cable and moved the handle back and forth a few times to get the brake working, and towed the Jeep away. 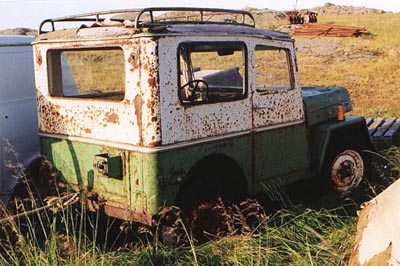 The sides and doors of the hardtop are made of steel on a wooden frame, and the roof is wood with some kind of canvas stretched over it and painted. The tub looks to be the original. 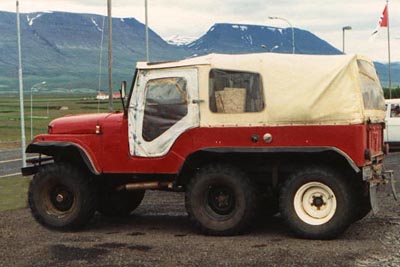 And here's an unusual photo. This picture of a six-wheeled CJ-5 or 6 was taken in 1987. It was 6-wheel drive, but I don't know much more about it -- I just took this picture outside a gas station in the countryside. (See a larger copy, 50K JPEG.)

I think this was a unique 6WD conversion, but extending the frame of early CJ's was quite common to increase their practicality as transportation vehicles. Mainly 2A's. About 50 cm. was added to the center section of the frame and a hardtop built. I do not remember ever seeing a CJ-3B extended this way. -- Magnus Sigurjonsson

Note: Michael Fletcher comments, "This 6x6 conversion of a CJ-6 looks like a conversion done by Ed Holbrook in Oregon in the late '60s (see Jolly Jeepers of Portland, Oregon). A rubber cleated track around the rear tires was an option. It also had a 3" diameter R&L rollcage." Think it's possible one of these could have ended up in Iceland?

Magnus replies: "I am sure that the 6x6 in my photo was converted in Iceland by its owner. I remember reading an article about it in a newspaper some years before I took the photo. Whether it was a CJ-5 or 6 I really don't know but my feeling slants towards a CJ-5. I find the information that similar conversions were done in Oregon, very interesting."

A Vanishing Way of Life 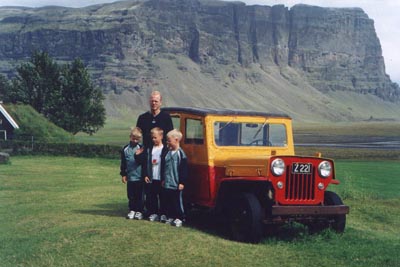 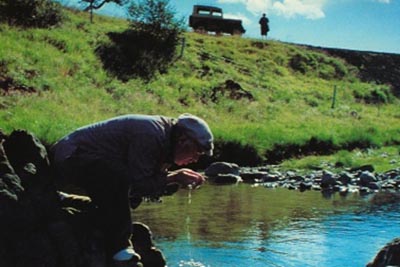 See also a CJ-3B in an Icelandic Movie, Children of Nature (Börn náttúrunnar), an Oscar nominee from 1991. 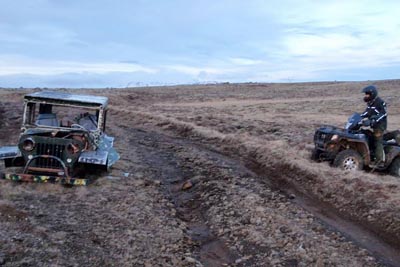 Hjalti Johannesson forwarded this photo from the Willys Jeppar á Íslandi (Willys Jeeps in Iceland) Facebook group. It looked like this CJ-3B had found its final resting place in Iceland's highland interior, but apparently the Jeep has since been pulled out and gone to the scrapyard. 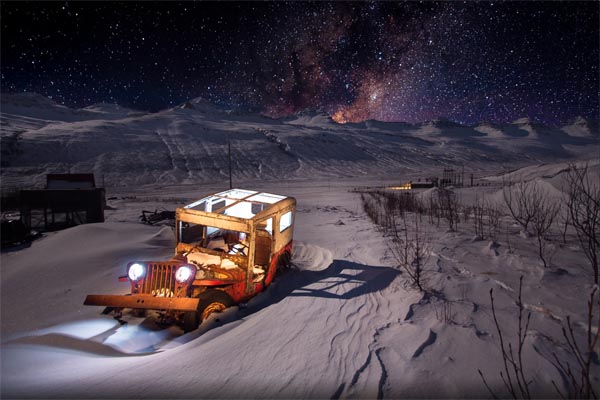 This beautiful light painting of a Jeep in Stöðvarfjörður, Iceland, is courtesy of Sigurdurf Bjarnason, who calls it "The Space Cowboy."

He says, "The Jeep was once owned by a local hero called Kalli í Dagsbrún and he gave it the name the little one."

Elsewhere on the web, see Jeppar á Íslandi on The CJ2A Page.